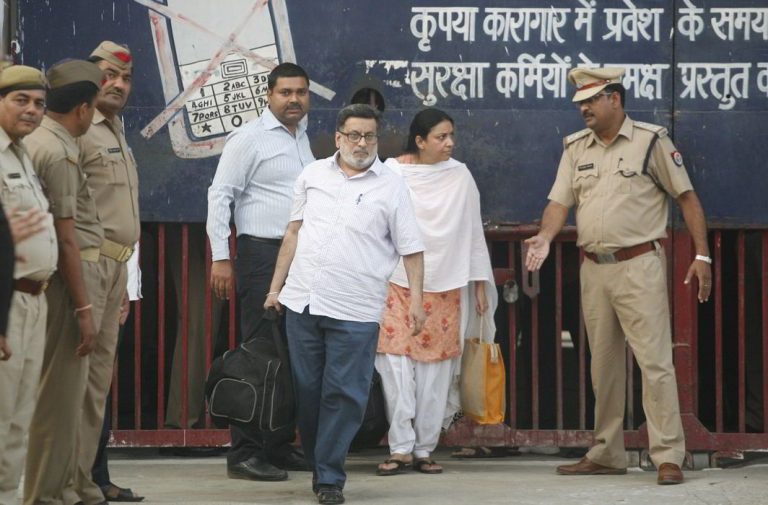 Above: Rajesh and Nupur Talwar coming out of asna jail after being acquitted by the Allahabad high Court

The Supreme Court on Monday (March 19) admitted two pleas challenging the acquittal of Rajesh and Nupur Talwar in the Aarushi murder case. The bench of Justices Ranjan Gogoi and R Banumathi admitted the petition filed by Khumkala Banjade, wife of Hemraj, the domestic help who along with Aarushi was found dead in the Talwar house.

The Central Bureau of Investigation has also filed a plea against the acquittal of the Talwars. The apex court, while admitting the CBI’s plea, has issued notice to the agency.  The agency said that the Allahabad High Court judgment, giving clean chit to the couple was wrong on “many counts”.

Banjade had filed an appeal in December last year, whereas the CBI’s appeal was filed on March 8. Both the pleas challenge the Allahabad high court judgment of October 12, 2017, acquitting Rajesh and Nupur Talwar of the charges of murdering Aarushi and Hemraj. A bench of Justices BK Narayana and AK Mishra of the high court had overruled the trial court judgment in the twin murder case.

The trial court, in 2015, had convicted the Talwars on the basis of circumstantial evidence and had awarded them life sentences.

The 14-year old Aarushi was found dead in the Talwar’s Noida residence in May 2008 and the 45-year old Hemraj’s body was recovered from the terrace of the house, two days later.