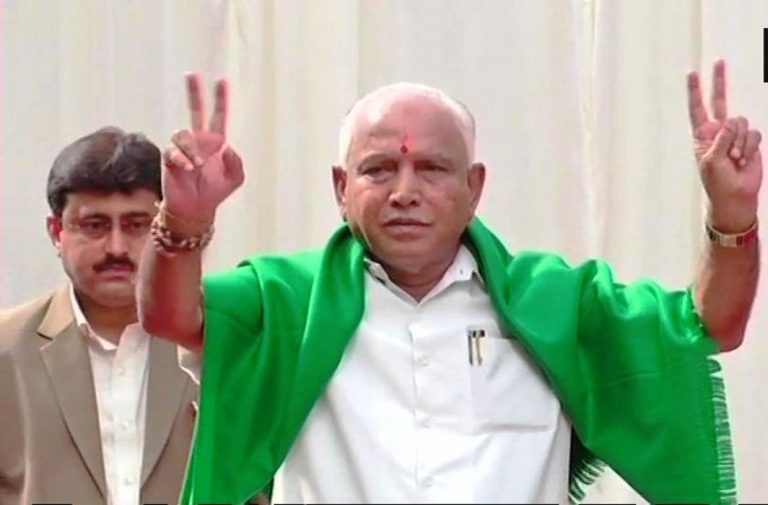 BJP’s BS Yeddyurappa took oath at 9 am on Thursday, May 17, just as he had claimed.

The decks for Yeddyurappa  were cleared after an unexpected hearing at the Supreme Court in the early hours of Thursday when the Congress confronted the Karnataka Governor’s 9pm decision to invite BJP leader BS Yeddyurappa to take oath as chief minister later on Thursday, May 17.

The apex court, while declining to set aside the Governor’s order for Yeddyurappa’s swearing in, said the hearing of the case would continue and fixed the next hearing for 10.30 am on Friday, May 18. It also asked for the list of MLAs supporting Yeddyurappa to be produced that day.

After Yeddyurappa’s claim that he would take oath as chief minister on May 17 was confirmed by Karnataka Governor Vajubhai Vala’s invitation to him to take oath as CM at 9 am that day, with only the night remaining for making their move, the Congress and JD(S) moved the Supreme Court.

Rohatgi said the Governor could not be stopped from taking a decision, that the court could not stop him from having a government sworn in.

Singhvi enumerating numbers said the Congress and JD(S) had informed the Governor on May 15 about their alliance. The BJP does not have a majority.

As Attorney General KK Venugopal also arrived for the hearing, Singhvi said as per the recommendations of the Sarkaria Commission …

The court interjected to say “…the single largest party is invited…”

Singhvi said, “No… the alliance having a majority is invited.”

“The Supreme Court approved this decision in the case of Goa,” he said.

Singhvi said while BJP’s chief minister-designate had asked for seven days, the Governor has given him 15 days. “Giving so much time is allowing chance for the Constitutional sin of horse trading.”

Justice AK Sikri said the single largest party has been invited to form government and it claims it would prove its majority, and you are arguing that they do not have anyone else’s support.

Singhvi said the BJP has 104 MLAs and unless eight MLAs from Congress break away to back BJP, they cannot get a majority.

The court said: “But the defection of MLAs is against the law.”

Singhvi: “That is exactly what I’m saying.”

Justice SA Bobde said that if the court stayed the Governor’s order, no government would be formed. Under Article 361, the Governor has certain special powers, said Justice Bobde.

Singhvi, cited the example of Meghalaya, Manipur and Goa, where Congress was the largest party short of majority and the first chance to form a government was given to a post-poll alliance, in Delhi Aam Aadmi Party was given a chance to form government with Congress support when BJP was biggest single party, and in Jharkhand JMM-Congress got a chance even when BJP had more seats.

Justice Sikri said the Governor had used his discretion and how could the court interfere with this power.

Singhvi countered, saying that the decision to hold swearing in by tomorrow morning (actually just 5-6 hours later) was extremely problematic and the SC could not be a mute spectator to it.

He said the plea for staying the swearing in was not to check the Governor but to check Yeddyurappa. The Governor, he argued, had not given any reasons for his decision (to invite the BJP leader to take oath despite lacking majority).

Singhvi also argued that the Governor’s decision was open to judicial review.

As he concluded his arguments, Attorney General KK Venugopal, arguing on behalf of the Centre, said it wasn’t a question of legality nor was it known what facts the Governor took into consideration – that the entire case was based on conjectures.

Singhvi said the court should postpone the oath taking for two days and hear the case in detail.

Mukul Rohatgi chimed in to argue that the court should not have heard the case at all, that too so late at night, that such hearing was held only for Yakub Memon (the terrorist, Mumbai bomb blast accused) case.

NDTV reported that Justice Sikri said the court had not seen any letter from BJP to the Governor staking its claim so how could it take a position on BJP’s claim.

Rohatgi argued that if the court deemed it necessary, Yeddyurappa could be removed from chief ministership, but how could the court stay Governor’s decision? He said the only question left was how many days should be allowed for the floor test. “Is this such an important/urgent question that has to be decided at four in the morning?” Rohatgi asked.

The SC bench finally decided not to interfere with the Governor’s decision to hold Yeddyurappa’s swearing-in ceremony, saying a final decision about whether one retains the post or not would come when the case was decided and there could be no interim order in this regard.