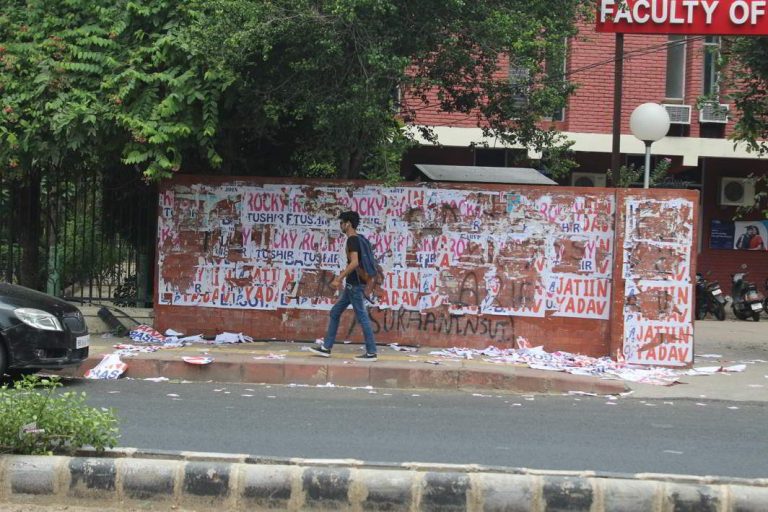 The Delhi High Court bench of Acting Chief Justice Gita Mittal and Justice C Hari Shankar on Tuesday (May 29) issued a series of directives in the case if defacing of walls during the Delhi University elections recently. A petition had been filed in the court asking for the elections to the students union of the university be declared null and void in view of the defacement, which was against one of the rules of the election process.

The bench said in its extensive order: “This writ petition was filed by Prashant Manchanda, complaining about the extensive defacement of the properties of the Delhi Metro, flyovers, boundary walls of Delhi University etc.

“The writ petition placed before us in September 2017, so far as the statutory provision deal with defacement of public property. DMRC Law empowers the police to register a case if any of the properties is defaced by any one.

“Our attention was also drawn to the provisions of the prevention from damage to public property. Section 2-3 which are relevant in that regard. So far as Delhi is concerned the authorities of Delhi are dealing with it.

“During the pendency of the petition we have issued notice to several students who have participated in the DUSU elections. All the civic agencies Delhi Police, New Delhi Municipal Council as well as Delhi Cantonment Board accepts notices in the matter. The court sought their stand on the defacement of the public properties.

“Considering the ‘magnitude’ of destruction caused to the public and private properties and the importance of issues raised in the Writ Petition the court directed the Petitioner Prashant Manchanda, counsel for DMRC Mr Pushkar Sood, DU,DUSU and all stake holders to formulate guidelines with a view to curb the menace of defacement in future.”

The key points of the order were:

(a) The Bench in its order has given directions to enforce the said guidelines by incorporating it in the form of directions for expeditious implementation of the same to comprehensively prevent and curb the unabated menace of defacement during the DUSU Elections.

(b) Guidelines includes constitution of Permanent Committees at the University level known as University committee for Prevention of Defacement of Property- and College committee for all colleges.

(c) In the wake of upcoming elections the Permanent committee shall convene its first meeting on July 7.

(d) Judgment of Bombay High Court by holding the political leaders vicariously liable in view of defacement done on their behalf by their supporters has also been directed to be enforced as guidelines.

All these guidelines have been directed to be widely circulated through all means  by all the stake holders across Delhi, in universities, college campuses etc.

It has been specifically and categorically directed to the public and civic authorities to take stringent punitive measures by criminally prosecuting persons involved in acts of defacement Under Section 78 read with section 82 of the DMRC Act, 2002 which involves punishment of 10 years, Prevention of Damage to the property act1984 and Delhi Prevention of Defacement of Property Act,2007.

The court in its last order had taken note of disparity in the Punishment involved in the acts of defacement.

On the last date of hearing notices have been issued. To the Government of India Ministry of Home Affairs, Ministry of Urban Development to look into the matter and provide a view.

Copies of the guidelines shall be furnished to the petitioners.

The University of Delhi shall ensure the guidelines be notified and same shall be on the websites.

All public and civil authorities shall take stringent measures if any defacement take place.

Delhi Police shall treat all matter when complaint is made with seriousness.

Copy of the Guidelines shall be sent to the all colleges.

The university of Delhi shall ensure that roman II of the Guidelines shall be implemented before 7/07/2018.

The matter was adjourned to July 16.