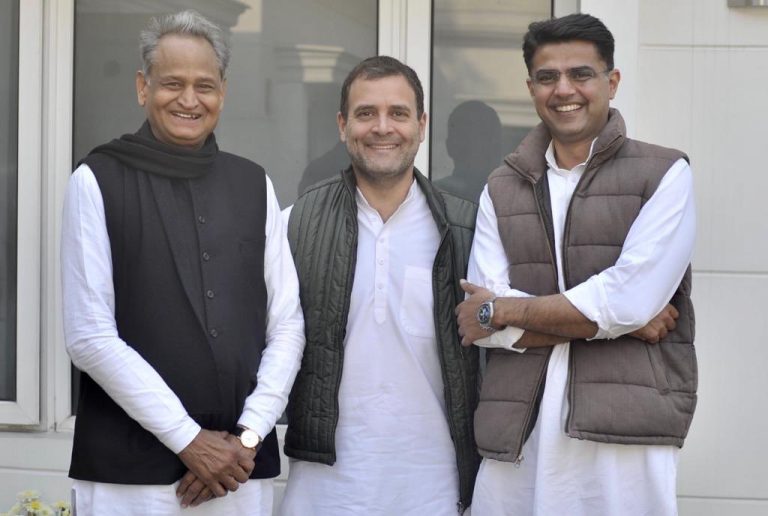 The tussle is finally over in Rajasthan. Two time chief minister Ashok Gehlot will once again occupy the chair while Sachin Pilot, the young pradesh congress president who is widely credited with  scripting the victory in the state will also double as deputy chief minister.

The development came after the two leaders met Congress chief Rahul Gandhi for a third time on Friday. Amindst widespread of either sides revolting in case the job was given to the other,  party chief Rahul Gandhi tweeted out a beaming picture of two leaders with him in the middle holding arms with the caption “United Colours of Congress”. .

According to sources, both Gehlot and Pilot were called by the Congress president for an amicable settlement to the issue amid a clear fight between the old and the young guard in the party. Sources said former Union minister and party leader from Rajasthan Jitendra Singh met Pilot earlier in the day and then met Gandhi. Rahul held a series of meetings with both Sachin Pilot and Ashok Gehlot through out day on Thursday. He even held discussions with sister Priyanka Vadra and mother Sonia Gandhi as the battle between experience and youth intensified. Ashok Gehlot, who tried to fly to Jaipur thrice, was called back from Delhi airport each time for meeting, however, the deliberations failed to come to any conclusion. Rahul Gandhi met Pilot and Gehlot again on Friday before an official announcement was out.

The Congress high command will now turn its attention to Chattisgarh where the main contenders are   TS Singh Deo and Bhupesh Baghel. Sources say Chhattisgarh Congress chief Baghel will probably get the job, although Singh Deo is not lacking in support either.