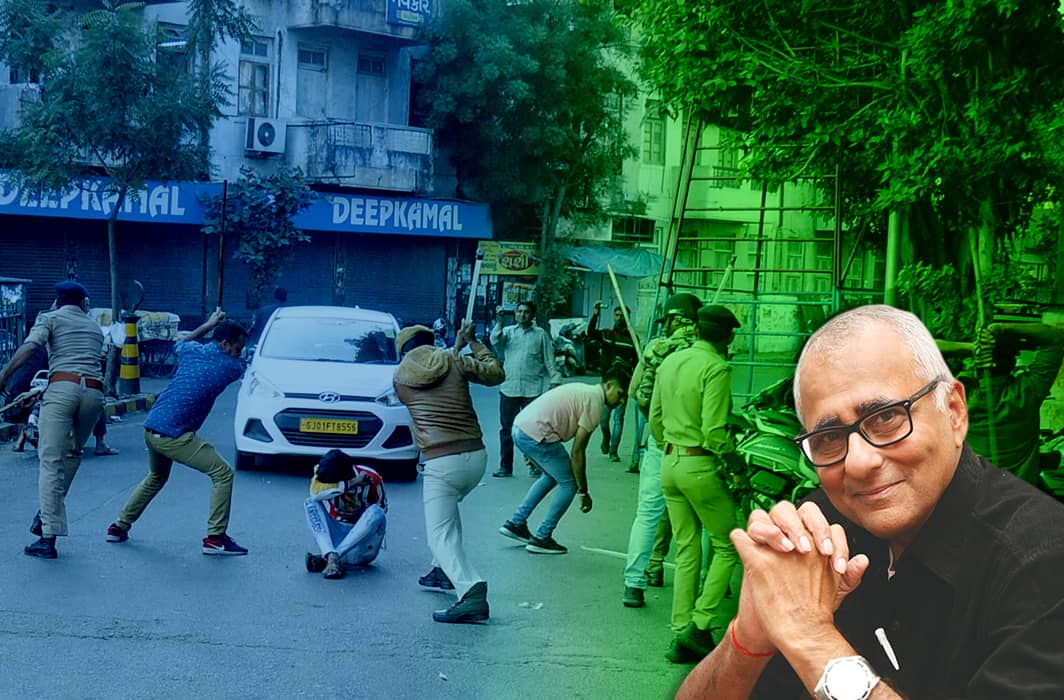 George Floyd, the unarmed American black man choked to death underneath the merciless pressure of a white policeman’s knee in broad daylight, has stirred, as never before, the collective conscience of nations across the world and brought millions of people out on the streets condemning the culture of impunity that protects police brutality and racism. One of the largest rallies in the United States was held in the capital, Washington DC, where thousands of people of all colours took to the streets near the White House, which was barricaded with black metal grates.

One immediate impact of these street protests was the passage, last week, of an unprecedented and sweeping legislation on police reform by the House of Representatives to check the virtually untrammelled misuse of force by uniformed men and women over civilians.

The new law, which is yet to receive sanction from the Senate and the president, prohibits tactics such as choke-holds of the variety that snuffed out George Floyd, and would remove legal obstacles that shield police from lawsuits. It would authorise $2.5bn for independent investigations of police abuse and open avenues for replacing some police in communities with social workers.

“In America today, a Black American is three times more likely to be killed by police compared to a white person,” said Representative Jim McGovern, a leading House Democrat. “Police shoot, arrest and imprison more people in our country than in similar advanced nations. It’s the exception when an officer who broke the law when committing a fatal shooting is convicted of a crime. It’s not the norm,” McGovern said.

In a flurry of related activities, states are now reopening and re-examining complaints, hitherto swept under the rug, of police excesses in the United States.

As citizens of the world raise their voices to demand a cessation of police barbarism which has nothing to do with the force’s legitimate duty to battle terrorism and violent criminals, another horrendous and terrifying example of police cruelty—that gives further ballast to the outpouring of the protests raging across continents—has come to light in Tuticorin, Tamil Nadu.

During the week that the world observed International Day in Support of Victims of Torture (June 26), Jeyaraj, 58, and his son, Fenix, 38, were arrested for keeping their mobile phone repair shop open after closing time under Covid regulations, and died allegedly after being tortured at the hands of rogue cops while they were in judicial custody.

The social media has erupted with outrage and Tamil Nadu began to see massive street protests notwithstanding the lockdown as details of smashed knees and bloodied private parts of the victims began circulating. But there was difference in the immediate aftermath of these deaths and that of Floyd: The cops involved in the American case were immediately fired and charged with murder. In India, the alleged perpetrators were suspended or transferred.

Unfortunately, institutionalised police brutality is a fact of life in post-Independence India. It is the rule rather than the exception and is condoned and even celebrated by the political class cutting across party lines as an effective tool of enforcing law and order and frightening citizens into compliance. Images of the police running amok during the recent Delhi student and anti-CAA protests, and the use of force against dispossessed migrant-victims of the Covid lockdown remain seared in our memories.

The Indian internal policing outfits are a dynamic and functioning remnant of the British Raj designed and trained to use force as the tool of first choice whether to extract confessions, bounty, revenge or to punish troublemakers. In this arrangement, the law and the Constitution take a back seat. And they enjoy virtual immunity from accountability. Within the confines of the “thana”, the local police station, the station house cops are judge, jury and executioners of both complainants and criminals.

It is small wonder then that whenever there are nationwide calls for police reforms, the most quoted jurist is the late Justice AN Mulla of the Allahabad High Court who, half a century ago, observed: “There is not a single lawless group in the whole of the country whose record of crime comes anywhere near the record of that single organised unit which is known as the Indian police force….” Even the National Human Rights Commission (NHRC) has used these lines to describe the Uttar Pradesh police while hearing charges going back to 2014 of wrongful detention, sexual assault, false implication and cover-up against the cops in Balrampur.

But how effective is the NHRC? It was established on October 12, 1993, under the Protection of Human Rights Act, 1993 (“Act”). Under the Act, the NHRC/SHRCs have the power to enquire suo motu or upon petitions filed on matters pertaining to human rights violations. It may intervene in any judicial proceedings on human rights, summon or seek attendance of witnesses, procure documents and evidence, visit prisons and detention centres and make recommendations to the government.

Every death in police and judicial custody is to be reported to the NHRC for its scrutiny, irrespective of such death being natural or otherwise. The Commission is constituted largely of retired Supreme Court and High Court judges and two members are chosen from among people with knowledge of or experience with matters involving human rights. The Commission, along with the various State Commissions, has the power under Section 18(c) of the Act to grant compensation in case of human rights violations by the police after an inquiry. As a norm, the NHRC grants compensation as a form of relief in all cases of police misconduct.

But as the Centre For Law And Policy Research pointed out in its landmark report on “Police Accountability In India”, “the biggest limitation of the Act is that, under Section 18, if the NHRC through inquiries has proven certain human rights violations, the Commission is limited to advising the government to prosecute the concerned persons or grant relief to the victim. This mere recommendatory power has made NHRC a weak mechanism for accountability”.

The NHRC for public information purposes, has categorised its cases into custodial deaths, police excesses, fake encounters, cases relating to women/ children, atrocities on Dalits and minorities, bonded labour, armed/paramilitary forces and other cases. The only available public information about NHRC is through its Annual Reports, and these Reports provide only selective, limited and cursory information. Further, none of the Annual Reports from 2010 onwards are accessible, the centre notes.

In the past three decades, several measures have been initiated to make serious police reforms. The National Police Commission submitted eight reports between 1978 and 1981 making various recommendations, but little action was taken to implement them. In the case of Vineet Narain vs Union of India, the Supreme Court noted the urgent need for implementation of these reforms, following which the Ribeiro Committee submitted two reports, in 1998 and 1999.

As the centre reports: The Supreme Court gave detailed directions which are to be followed by the Centre and State Governments until legislations in this regard are enacted. The directions include: (1) each state government must constitute a State Security Commission to ensure that police are protected from illegitimate political interference; (2) fixing the selection and minimum tenure of Chief of Police (DGP); (3) minimum tenure of other police officers, including Inspector General of Police (IGP), Deputy IGP, Superintendents of Police incharge of districts and Station Officers; (4) separation of investigation function from “law and order” functions; (5) setting up a Police Complaints Authority; (6) setting up a National Security Commission; (7) setting up a Police Establishment Board which will decide issues concerning transfers, postings, promotions and other service related matters of officers below the rank of Deputy Superintendent of Police.

In conclusion, the centre’s report examined three broad mechanisms of external police accountability—(1) Judiciary-based accountability, (2) Police Complaints Authority, and (3) National and State Human Rights Commissions. Under judiciary-based accountability, victims of police misconduct have remedies either under public law, private law or criminal law. Compensation is awarded to the victims or their representatives in all these three forums. However, the public law remedy is the most commonly used platform almost to the exclusion of private law remedies under tort.

In private law, “although the doctrine of sovereign immunity is not considered a defence, but if it is argued that the action of the police is in direct nexus and in the course of the duty, it is still considered a defence under tort law. Private law remedies therefore are more suitable in cases where the cause of action and evidence is more controversial and doubtful. Protection of fundamental rights of citizens from police excesses has largely been restricted to the High Court or the Supreme Court although even lower courts have jurisdiction to try these matters and pass orders of compensation. The burden of proof is much higher in public law, limited to cases of clear and gross violation of fundamental rights. Further, in all cases of police misconduct, it is the State which has been made vicariously liable to pay compensation and not the individual police officers. Criminal law is also used as a remedy, and compensation is often granted under such cases of police excesses. The procedural safeguard available to police officers is a hurdle while instituting criminal complaints against them.

“Although courts have held that sanction of the government under Section 197 and 132 of the CrPC is not required, it is often a misused provision, preventing lay persons from registering FIRs against them. Police excesses often cause harassment and injuries but may not necessarily amount to a violation of fundamental rights.”

Veteran journalist KG Suresh wrote perhaps the most memorable analysis on this subject in The Pioneer in April 2013. A few memorable paras still stand out: “The police is the first and foremost interface between the people and the Government. It is not only the ‘sarkar’ but also the ‘maai-baap’. Yet, the cane in the hand of the policeman is seen as a tool of torture rather than the mace of Hanuman or Bheem—meant to protect the poor and the meek, and to ensure justice. Elders are often quoted as saying that police, courts and hospitals are best avoided in one’s life-time. A policeman on the street does not inspire any confidence. On the contrary, if a policeman flags down a car, it is seen more as an attempt to fleece rather than a genuine concern for security. The filthy and abusive language the personnel use against the poor and downtrodden is appalling, to say the least. Police personnel are trigger-happy, cane-happy and now water canon-happy, when it comes to dealing with the aam aadmi. “The attitudinal change cannot come through sermons or seminars, but it has to trickle down from the top itself. The political class, which owes its very existence to the people, should show the way, while the IPS officers have to be reminded that they no more belong to the Imperial Police Service. The need of the hour is a paradigm shift in police legacy, literacy and loyalty—in the absence of which, more weapons and boots would only serve to make the police a more brutal force, nothing but criminals in khaki.”

Did you find apk for android? You can find new Free Android Games and apps.
Share
Facebook
Twitter
Pinterest
WhatsApp
Previous articleConvalescent Plasma Therapy: A Treatment For COVID-19
Next articlePerseverance In life of Lawyer Means Taking Small Steps and Working on Self Improvement: Justice Sanjiv Khanna