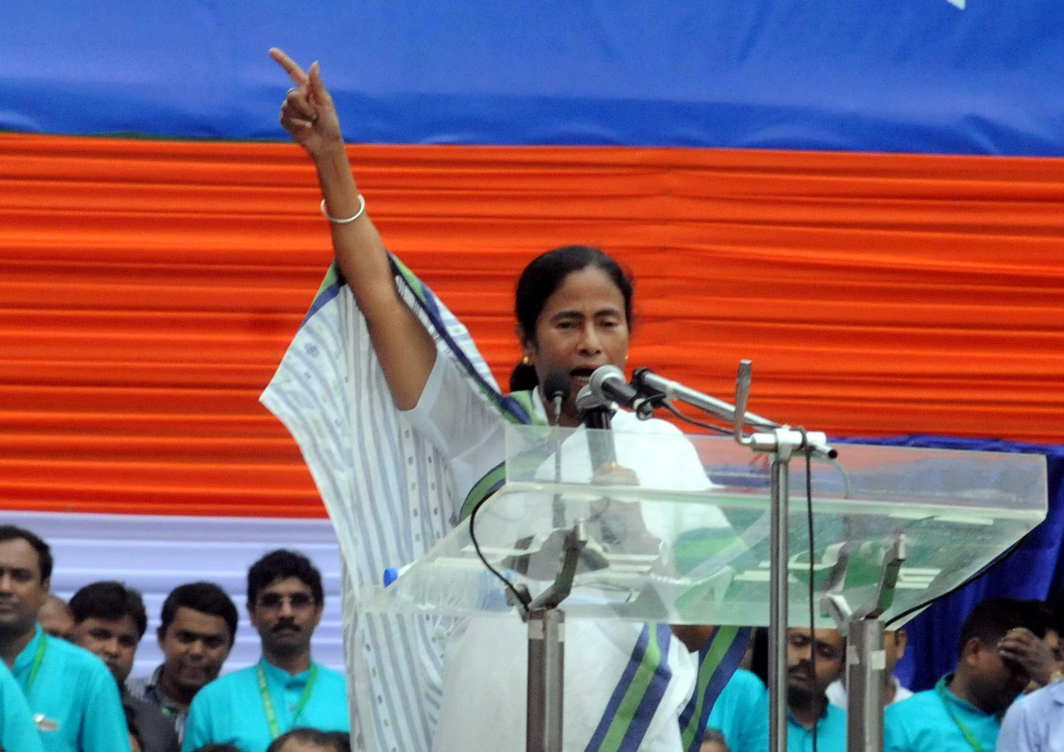 Above: With the Darjeeling test a success, Mamata Banerjee can use the Act across the troubled zones of West Bengal. Photo: UNI

The TMC may have swept the recent municipal polls but the party still sees the BJP as a looming threat. It is to checkmate it that cases have been filed for anti-national activities against the saffron-friendly leaders of the Gorkha Janmukti Morcha

Chief Minister Mamata Banerjee has finally found the right medicine that not only fights home-grown, destabilising forces, but also takes care of outside threats, such as the BJP’s thrust towards its “Final Frontier”, West Bengal. The medicine, as Didi discovered, was no other than the BJP’s very own super-nationalistic chest thumping that can lead to charges of sedition.

Not that Didi’s Trinamool Congress (TMC) is in immediate danger of a break-up, but she has taken lessons from incidents of the recent past to formulate a strategy that is legal and could work in her favour for some time now.

As of today, the TMC is placed comfortably. In the recent elections across seven municipalities (148 wards), the TMC won a stupendous 94 percent-plus mandate (140 seats). The BJP got six, the Forward Bloc, a constituent of the Left Front, got one, and the once mighty CPI (M) and the Congress nil each. One seat went to an independent candidate.

However, Mamata knows that today’s Cinderella could sweep at the hustings, if she fails to take rearguard action. Even with 18.7 percent of the votes, the BJP is the wickedest thorn in the flesh of Mamata’s, and not without reason.

Despite all her political acumen, Mamata has not been able to keep her flock together in certain areas. Her influence beyond the boundaries of West Bengal is weak. Recently, six TMC MLAs quit and joined the BJP in Tripura. Within the state, her once-trusted aide Mukul Roy has leaned so dangerously close to the BJP that Mamata, on August 29, wrote a letter to the Lok Sabha Speaker, saying that MP Derek O’Brien would be replacing Roy as chairman of the standing committee on transport, tourism and culture.

The standing committee was reconstituted in August, but TMC insiders say that Roy’s presence in Delhi was making Mamata rather uncomfortable. It is also rumoured that another of Didi’s heavyweight supporters, Subhendu Adhikari, who lords over the huge and populous district of Midnapore, is also looking the saffron way.

Even the recently floated TMC idea that a formal alliance would be worked out in the state with Congress, is in danger. Current Pradesh Congress president Adhir Ranjan Chowdhury is so fed up with his party’s High Command that he, too, is rumoured to be pleasantly inclined towards the BJP.

Within this chaos, Darjeeling was another big itch. And the BJP presence is pronounced in that troubled district, with its second MP from the state, SS Ahluwalia, having won from there (the other is Union minister Babul Supriyo). Even the earlier MP from the region was a BJP heavyweight, Jaswant Singh.

The Gorkha Janmukti Morcha (GJM), headed by Bimal Gurung, had been using this to its advantage for a while, playing one party against the other and living off the spoils. When Mamata was worried sick as to how to deal with this problem, she got an idea from her trusted senior party men and police officers.

Mamata has been crying hoarse for a long time that Gurung and the GJM was receiving help, funds and arms from banned Maoist organisations, as well as from organisations across the border (Myanmar). Whether these claims are founded on facts remains a matter of debate and research, but that hardly matters in politics.

The instigation came on the night of August 19, when a strong blast shook Chowkbazar in Darjeeling. Being set off at the dead of night, there were no casualties reported, but the state government immediately convened an emergency meeting at its secretariat (Nabanna) in Kolkata and filed a case under the Unlawful Activities (Prevention) Act, 1967, against Gurung and his GJM associates Prakash Gurung and Pravin Subba. The objective of this law was to make powers available for dealing with activities directed against the integrity and sovereignty of India. Hence charges tantamount to sedition.

Knowledgeable circles in the state say this was Mamata’s masterstroke. It aimed to nip in the bud Bimal Gurung’s intransigence and his propensity to play the BJP against the TMC. It was also aimed at preventing the BJP from getting involved in a situation where a case of sedition has been lodged. There are rumours that the blast itself may have been the handiwork of the government to force its own agenda, but that argument has failed to gain currency.

A TMC insider—who is also a lawyer, but cannot be quoted, because he does not have his leader Mamata Banerjee’s authorisation to speak to the media—explained to India Legal the scope of this act.

“It (the scope) is huge,” he said. “Even after several amendments (the latest being in 2012) you can easily see how the BJP would be straitjacketed in this area. As per the act, the definition of terrorism has been left to interpretation. Its range is wide and can include political protests, even non-violent ones. This interpretation angle empowers the government to declare an organisation as ‘terrorist’ and ban it.”

“The bigger thing is that even if you are a common member in such an organisation, that is a criminal offence. And a detention period of up to 180 days before filing of a charge-sheet is allowed. In this, police custody can be up to 30 days,” he said. “Bails or anticipatory bails are irrelevant, and the government can create special courts to deal with such ‘terrorists’. There can also be closed-door hearings.”

This means that the mere scent of a support by any political party member would be dangerous for that party’s well-being. This Act was supposed to be a watered down derivative of the dreaded Prevention of Terrorism Act (POTA), which was done away with, but it has been argued that hardly any section of POTA has been removed, only reworded.

So what happened? Union Home Minister Rajnath Singh has already held meetings with Mamata, and almost immediately after the case Gurung wrote to the chief minister, asking for dialogue. It was a clear victory. Mamata agreed, and on August 29, a crucial meeting with major hill-based political parties was held in Kolkata. At the table with state officials were GJM representatives, along with the Gorkha National Liberation Front (GNLF) and the Jan Andolan Party (JAP).

Mamata has said that this was “the beginning of a dialogue process. We are happy we have been able to sit across the table. We have requested them to withdraw the strike since its causing great hardship to the people.”

But that was not the only aim for Mamata. The bigger victory would be in reining in the BJP. With the Darjeeling test a success, Mamata can use this act across the troubled zones—and there are many—of the state. The communal hatred that has grown with extreme right-wing intervention can now be controlled within legal parameters.

While protecting her legally-earned turf, Mamata is in no mood to give it up to quasi-political machinations. The TMC insider said: “Our leader and we are prepared to go the distance to stop the illegal interference of the BJP and we will be using existing laws to our advantage.”

The political play that Mamata wants to nip in the bud was explained by Arunava Ghosh, a senior advocate and a long-time political activist. He says: “The BJP has little manpower in the state. But that does not mean that they are weak. Frankly, the BJP is willing to tie up with anyone to get into the heart of a political system. If you look at Bihar, you get an idea. I had personally been approached by RSS supremo Mohan Bhagwat a long time back. They are willing to try every tactic in the book and some not in the book.”

Ghosh joined Mamata’s TMC and was a senior member of the administration. The two fell out with growing differences in opinion and Ghosh came back to the Congress. If any alliance is struck in the state between TMC and Congress, Ghosh could be back in a position of negotiation.

The use of this act could give some extra-judicial powers to the government and it can effectively insulate its actions from scrutiny. Mamata believes that the use of this method can also act as a template for other non-BJP states to thwart the advances of the ruling party at the Centre. This is also part of her national agenda, another effort at coalescing rag-tag opposition members into a viable force in national politics.

Finally, the act could put an end to interference from Governor Keshari Nath Tripathi, who has often not bothered to camouflage his affinity with the BJP, hitting out at the state government. Here, too, Mamata will have law on her side.