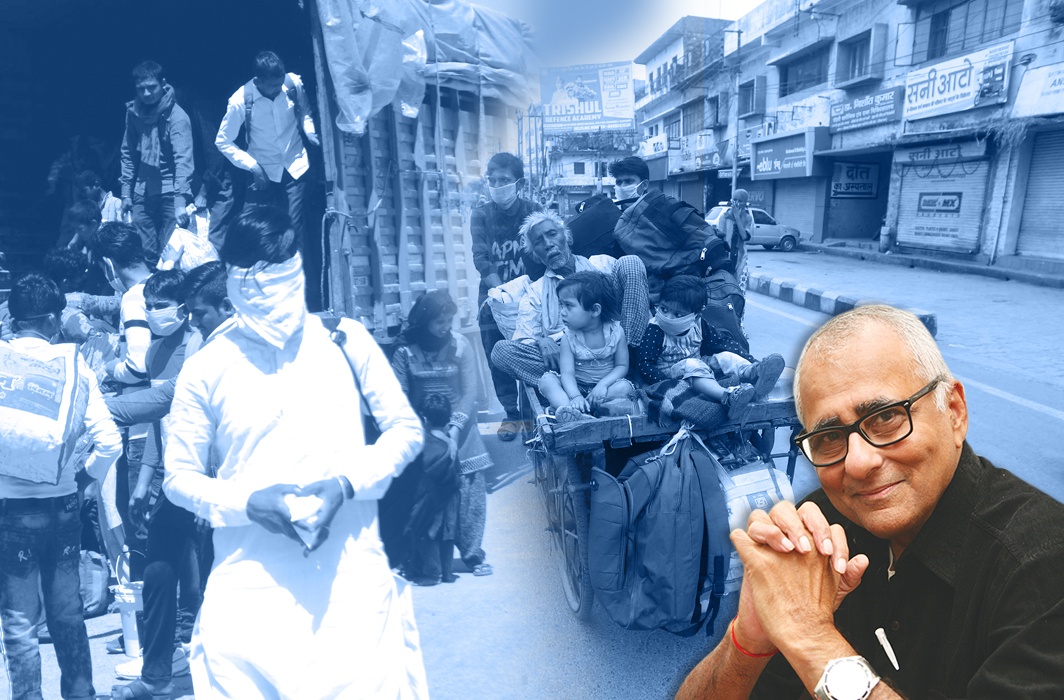 “Not a shirt on my back
Not a penny to my name
Lord, I can’t go back home this ole way…

The lyrics of these ageless folk ballads cascade down my mind each time I see images of millions of the wretched of India’s earth walking barefoot, not a hundred, not five hundred, but a thousand miles to their villages in the blistering heat in search of succour, shelter and dignity that were precipitously snatched away from them when their big city employers brought the shutters down on their faces in the countrywide Covid lockdown.

It is not an uncommon sentiment for humans who migrate from the countryside to consider the places of their employment as “pardes” or a foreign land as compared to their “des” or native village. Even though they leave their birthplaces because of economic privation, they remain rooted to the soil that nurtured them, and it is back to this soil, no matter how barren or bereft of  sustenance, that they return for the nutrition of psychic healing and mental comfort.

What sustains them on this long march—the largest mass migration since the Partition of India in 1947—as they give birth on highways, are crushed by locomotives on railroad tracks, mown down by trucks on speedways or starve—is the lure of belonging again, of dying not as a desiccated corpse in a stinking mortuary but passing away as a soul within the nourishing caress of the womb that spawned them.

Not for nothing are some of India’s most sung popular Bollywood ballads devoted to homesickness, the almost mystical yearning of the expat—the “pardesi”—for his “des”—“Chithi aayee hai” (At last a letter from home) that wistfully sums up the anomie of the immigrant; “O jane wale ho sake to laut ke aana” (Farewell, you are departing…return some day if possible); “Aa ab laut chalein” (Come, it is time to return to your land that beckons you).

This is not a sentimental journey through a mushy musical memory lane. It is intended to remind ourselves that songs and lyrics often bring home the subtleties of what motivate and spur and strengthen the resilience of the human spirit in the harshest and cruellest of circumstances as we are now watching in helpless horror.

Some of the best prose I have recently read on this subject comes from the penmanship of author Siddharth Dhanvant Shanghvi who writes in Daily-O:

“They are not fleeing the pandemic; they’re fleeing us. They took one long, clear, searing look at us—identified us as the industrial strength ingratiates that we are—and they packed their bags and left. It wasn’t the bug, it wasn’t being denied wages, it wasn’t heat, it wasn’t the filth, it wasn’t even the slumlord’s overnight eviction. They just realized who we were—people who saw other humans as essentially a replaceable means to an end—and they decided to replace us. And none of us—a middle-class, virtue signaling, carbon foot print counting, urban constituency of mid-of-career hashtaggers—imagined that our employees would left swipe us. But yes, that’s exactly what happened.

”Every time you think—Thank God I have a home of my own in this pandemic—you acknowledge all those who had originally left their own home, travelled hundreds of miles, shacked up under plastic roof shanties for months, without a kitchen or indoor plumbing, to build that house you now call home. Those Indians walking on the streets, hungry, dispossessed, broken, betrayed by the government they voted into power, betrayed by the people whose businesses they established—they’re the folks who made the place sheltering you during this storm of storms. They are not migrant workers: they are the original founders of your home.”

This highly emotive exhortation to look within ourselves along with other gut-wrenching observations and reports from journalists and bloggers are not without practical impact. Somewhere, somehow consciences need to be stirred in order to awaken the political classes. Our cover story this week is a package of two major analytical and prescriptive calls to action  from influential public figures—Justice Kamaljit Garewal (read here) who also served on the UN Appeals panel, and lecturer-sociologist Dunu Roy (read here)—which are designed precisely to accomplish that aim.

Justice Garewal’s essay on “Justice in the Time of Covid” argues that as refugees trudge home and questions rise about their future, it is the duty of the executive to protect their rights. The time is ripe for a law under Article 32(3) to empower district and sessions judges to help them.

Roy takes a critical look at Covid-19 and the law. He scrutinises the various laws which deal with epidemics and disasters but as thousands of migrant workers flee the cities, they are forcibly detained without the necessary support systems. Under what authority of law is all this being done, Roy asks.

Says Justice Garewal: “India must make a new beginning and lay down a viable welfare state model based on the Directive Principles. The federal scheme ought to be re-structured on the principle of subsidiarity so that issues such as health, school education, employment and housing are addressed at the local level. More powers need to devolve to the states. Panchayats and municipalities must be strengthened. Judicial powers of district and sessions judges should include writ jurisdiction under Article 32(3) of the Constitution.

“From the Covid-19 crisis shall rise phoenix-like, a new India to take into its embrace each and every citizen. The weak shall then begin to walk hand in hand with the strong.”

I sincerely hope this is what the prime minister was talking about during his recent address to the nation when he stressed self-reliance and the need to turn the crisis into an opportunity.