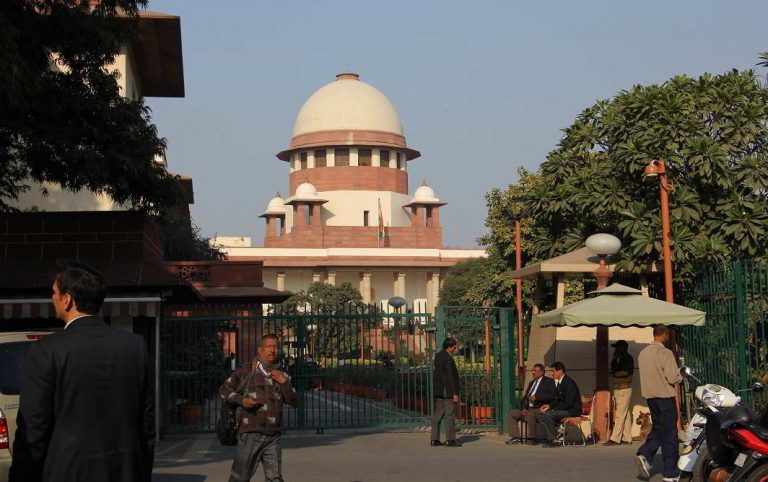 Question referred to a constitutional bench

The questions that Justices Dipak Misra and Rohinton Nariman of the Supreme Court of India faced were about the status of a parliamentary standing committee report in the proceedings of the court. Can the report be cited as evidence by petitioners? Can the court rely on it as a source of evidence? If it is offered as evidence, then can the report be criticised in the course of the arguments of a case that a court is hearing?

The judges have referred the matter to a constitutional bench under Article 145(3) of the Constitution in their judgment of April 5, 2017. The questions that they framed in this regard were:

“(i) Whether in a litigation filed before this Court either under Article 32 or Article 136 of the Constitution of India, the court can refer to and place reliance upon the report of the Parliamentary Standing Committee?

The issue came up in the course of the hearing of Kalpana Mehta and Others vs the Union of India and others, which concerned the anti-cervical cancer vaccine trials and approvals, and the death of some persons while administering the medicine when clinical trials were conducted in the states of Gujarat and Andhra Pradesh (before the bifurcation into Telangana and Andhra Pradesh).

The court was looking at the role played by the Drugs Controller General of India and the Indian Council of Medical Research in giving their approval to the vaccine which is manufactured by global pharmaceutical major, GlaxoSmithKline Asia Pvt Ltd, and MSD Pharmaceuticals Private Limited. The writ petition in the matter was filed in 2012.

On August 12, 2014, the court had framed some questions with regard to the procedures and protocols with regard to the approval of the vaccine, including, “What is the action taken after the Parliamentary Committee had submitted the 72nd report on 30.08.2013?”

In the affidavits filed by counsel for petitioners, Colin Gonsalves and Anand Grover, drew the attention of the court to the 81st report of the Parliamentary Standing Committee of December 22, 2014. The judgment recapitulates the dilemma that arose. It says, “Be it noted, when the report of the Parliamentary Standing Committee was produced, the question arose with regard to the “concept of consent” for the administration of vaccine and the resultant illness suffered by the victims and such other issues and the Court had issued certain directions for filing of affidavits pertaining to steps that have been taken by the concerned Governments keeping in view the various instructions given from time to time including what has been stated in the report of the Parliamentary Standing Committee.”

The judgment recalls that on November 18, 2015, the counsel for MSD Pharmaceuticals private Limited and the Additional Solicitor General raised the question “whether this Court while exercising the power of judicial review or its expansive jurisdiction under Article 32 dealing with public interest litigation, can advert to the report of the Parliamentary Standing Committee and on that basis issue directions.”

The counsel wanted time to file written affidavits and the court sought assistance of the Attorney General of India keeping in mind “the importance of the matter”.

The judgment recounts the opinion Attorney General Mukul Rohatgi had given in his written submission: “… the reports of the Parliamentary Standing Committee are at best external aids of construction in order to determine the surrounding circumstances or the historical facts for the purpose of discerning the mischief sought to be remedied, but not for any other purpose.”

The judgment then reprises the view of counsel for petitioners, Grover and Gonsalves: “…the Court can always take aid of the report not only for the purpose of understanding the legislative intendment of a legislation, but also for taking the facts into consideration to issue any prerogative writ.” But they (Grover and Gonsalves) contended “that as long as the reference to report does not violate the freedom of speech of the members of the Committee or there is no attempt to impugn the report or criticize the same, reliance on the same should not be prohibited.”

The judgment then refers to the argument made by the senior Counsel for the Union of India, who said “…the report of the Parliamentary Standing Committees are meant to guide the functioning of the departments and work as a precursor to the debate in Parliament but not meant to be used in court as it does not countenance any contest in a court of law.”

The judges are acutely aware that if the report of the Parliamentary Standing Committee is allowed to be used as a basis for issuing a court directive or a writ of mandamus, it also opens up the possibility of determining whether the report is reasonable in its assumptions or not. The judgment takes note of this fact: “Once the Court is asked to look at the report, the same can be challenged by the other side, for it cannot be accepted without affording an opportunity of being heard to the respondents. The invitation to contest a Parliamentary Standing Committee report is likely to disturb the delicate balance that the Constitution provides between the constitutional institutions. If the court allows contest and adjudicates on the report, it may run counter to the spirit of privilege of Parliament which the Constitution protects.”

This is not the first time that the question arose with regard to the privileges of the legislature and the judiciary. The judgment refers to the ample case laws that are available. But the status of the report of the parliamentary standing committee in judicial proceedings poses a difficult question of constitutional distinctions.