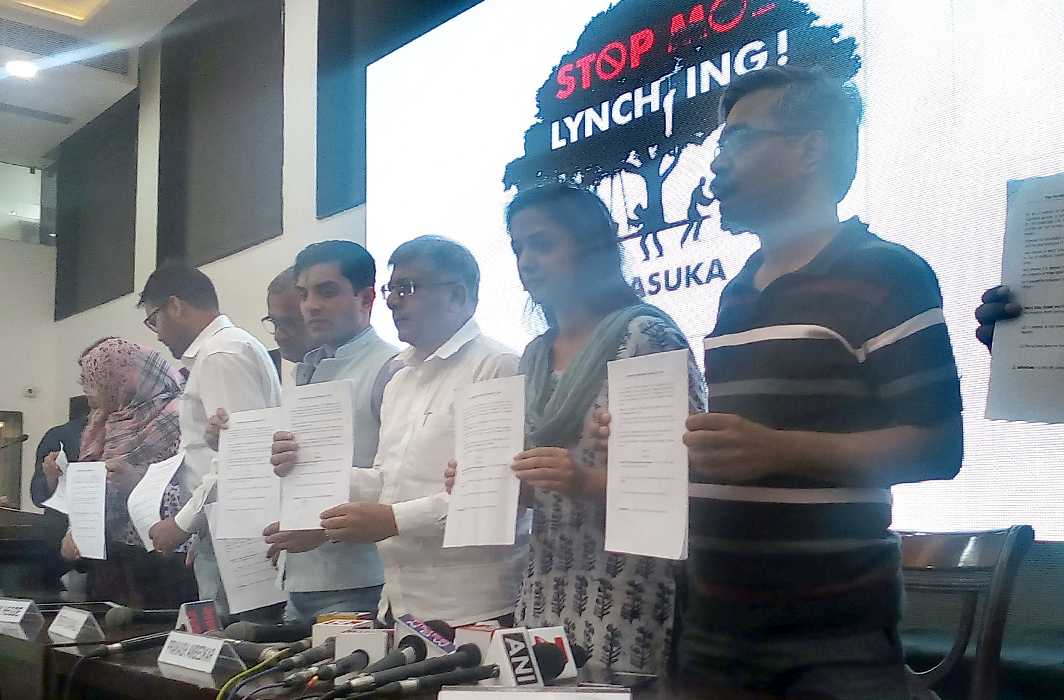 Above: The draft bill on lynching was released at the Constitution Club of India in New Delhi on July 7. Photo: Lily Paul

Like-minded citizens have come together to prepare a draft bill, Protection From Lynching Act, 2017, looking at a new law against the rampant mob lynching taking place in the country. The draft was released at the Constitution Club of India in New Delhi on July 7 by the National Campaign Against Mob Lynching. The effort is termed Manav Suraksha Kanoon (MASUKA).

The group has in its fold, founding members who are youth leaders, such as Tehseen Poonawalla, Shehla Rashid, Kanhaiya Kumar, Jignesh Mewani and Pankhuri Pathak.

The draft will be given to the NDA government first for their MPs to take up. If they do not, then there is a possibility that the draft will be given to any MP to be presented as a private member bill. However, there seems to be a difference of opinion within the group on how to approach with this draft, with Shehla Rashid not being in favour of a private mention. This is a bit of confusion they have to clear up before they go ahead with it.

The draft defines ‘mob’ and ‘lynching’ and it also proposes to make lynching a non-bailable offence. It puts responsibility on the concerned SHO of the area where the lynching took place and demands a time-bound judicial probe, with the maximum time limit of six months. The imprisonment for the guilty can extend up to life imprisonment under the proposed bill. It also demands compensation for the victim’s family.

A website and an email-Id have also been launched for people to send in their suggestions, queries and feedback on the draft. The draft has been uploaded on the website stopmoblynching.com. People can register their support for the bill and send their queries, comments and suggestions to the website. The members had also planned to take out a march to the Prime Minister’s residence and hand him the draft (read the draft) personally but since he is off to Hamburg for the G20 summit, this couldn’t be possible.

The campaign members will give a copy of the draft to the MPs of their area asking them to support the bill and will conduct events to keep the campaign going. The campaigners will also take out an Insaaf march to the Parliament when the next session begins on July 17.

The members said that they had earlier decided to name the bill Nagrik Suraksha Kanoon but later changed it to Manav Suraksha Kanoon because not just Indian citizens but African nationals have also been harassed and assaulted by mobs and therefore this bill has been drafted to save any human subjected to barbarism by mob.

On being asked if they were hopeful about the government giving a green signal to their bill Tehseen Poonawalla took a dig at the Prime Minister saying: “Our Prime Minister is a very kind hearted man, he condemns violence taking place in any part of the world. He was the one who said don’t kill the Dalits, kill me instead. When you have such a prime minister why wouldn’t one be hopeful? We have all our faith in him.”

Teesta Setalvad, who will be launching the draft in Mumbai, said: “Any citizen of this country, who seeks help from the police or the authorities should not be denied help as it happened with Junaid’s brothers or Najeeb’s mother. I extend my support to this bill and every aware citizen of this country should support it.”

Student activist and one of the members of the drafting committee, Shehla Rashid, said: “The onus is completely on the Prime Minister, he should accept and stand up for this bill thereby giving the message to cow vigilantes, Not in My Name. We don’t want this bill to be presented as a private bill because such bills get nowhere, we want the government to take it up.” Here is where the confusion arose in the route the draft should take. Other members did express to this correspondent that they had no objection to this draft moving through as a private bill.

Prakash Ambedkar said: “If the government accepts this bill, a message will go across the country that they do not support the culture of lynching.”

Prior to the draft release, an online petition was floated by actor Swara Bhaskar on Change.org demanding a ban on cow vigilante groups. The petition at present has received over 27,000 signees. The petition titled ‘Walk the talk, enact Manav Suraksha Kanoon’ was addressed to the Prime Minister.