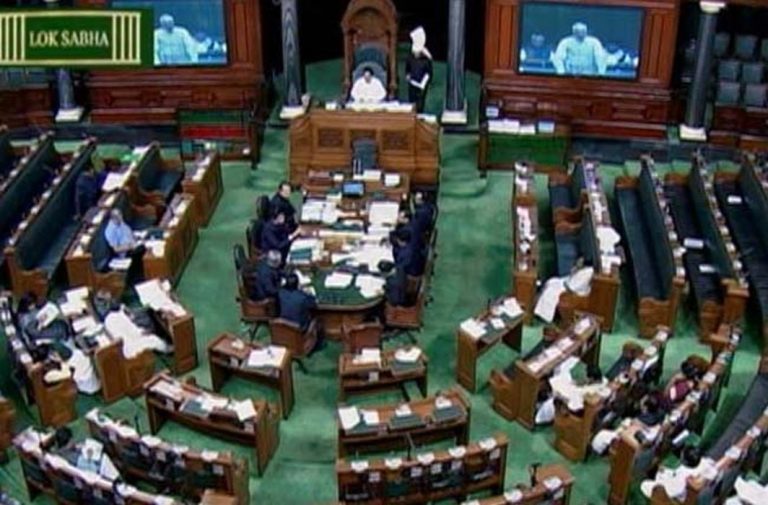 Above: A TV grab of the Lok Sabha

The Parliament once again on Monday (March 19), failed to take up the no-confidence motion against the NDA government as the House was adjourned following the protests led by the Opposition parties.

The no-confidence motion has been filed by the YSR Congress Party (YSRCP) and Telugu Desam Party (TDP) of Karnataka for not giving Andhra Pradesh ‘special category status’. It was on Friday (March 16) that the Opposition had first tried to bring the no confidence motion; however, it was not successful because the House was adjourned because of ‘lack of order’.

The Lok Sabha Speaker Sumitra Mahajan while adjourning the House said that she was duty bound to bring the no-confidence motion but cannot do it unless the house was in order. This is the 11th day that the House has been disrupted because of protests. Meanwhile the Rajya Sabha was also adjourned for the day without any transaction of protests. Home Minister Rajnath Singh while appealing the MPs to end their protests, said: “We want a discussion on the issue of no-confidence motion and we appeal to everyone that there should be discussion”.

After the Centre made it clear that Andhra Pradesh would not be granted special category status, the YSR Congress gave a notice last week for a no-trust motion, followed by the TDP. TDP which has recently pulled out of the NDA over the same issue also brought a no-confidence motion of its own.

Since then both the parties have been talking to other Opposition parties for support. A no-confidence motion must have the support of at least 50 MPs.

The government is confident that the notices, even if accepted will not be passed in the House since the NDA, with the support of 315 MPs in the 543-member house, has a clear majority. The Lok Sabha has a current strength of 539 excluding the Speaker and the BJP has 275 members, which is clearly above the majority mark.

Of the Opposition parties that are in support of the no-confidence motion, the Congress has 48 MPs whereas the Trinamool Congress has 34, the TDP has 16, the YSR Congress and the CPI (M) have 9 MPs each, the NPC has 6 MPs, AAP and RJD have 4 MPs each and the AIMIM has one MP. Thirteen MPs from the ‘Others’ category are also in support of the motion. However, parties such as the AIADMK, Janata Dal and Telangana Rashtra Samiti have stayed neutral on the motion.