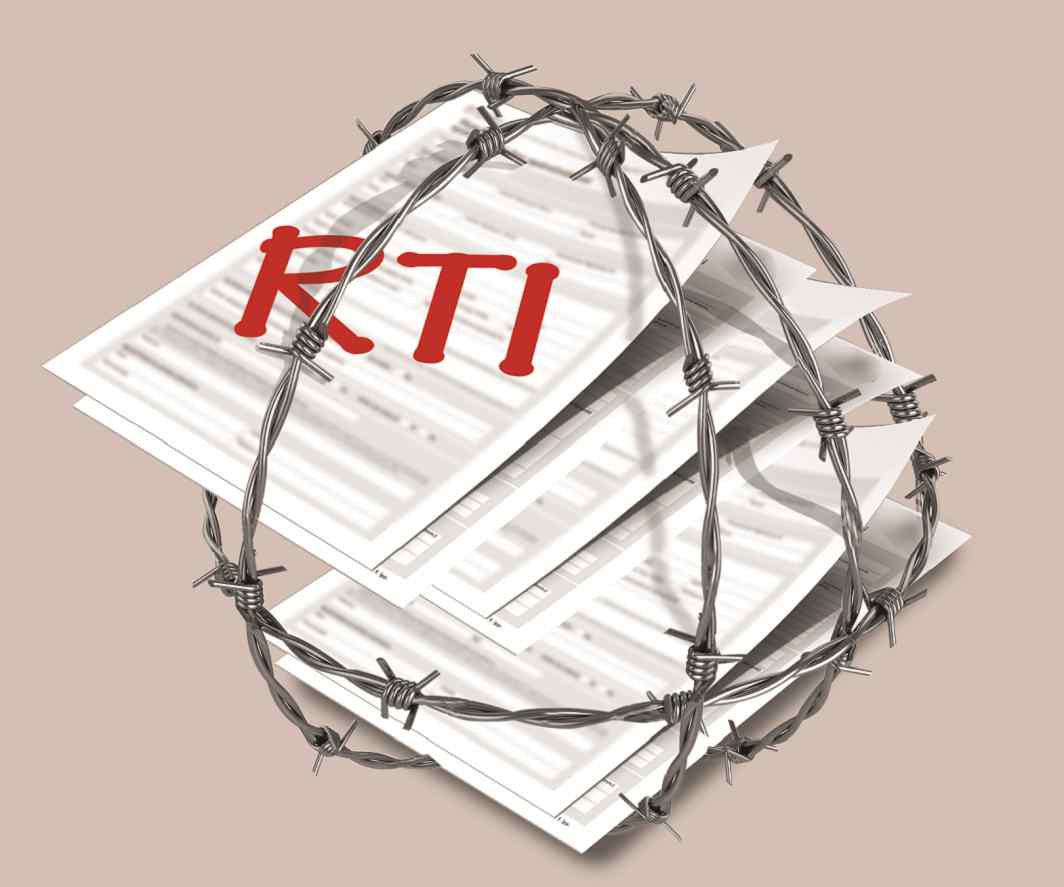 RTI activists Nikhil Dey, Naurti Bai and three others were convicted in a 19-year-old case by a Rajasthan court. They were allegedly framed for seeking information in a corruption matter. Only a higher court can now provide them relief

On June 13, five Right to Information (RTI) activists were sentenced to four months jail by a court in Rajasthan after being convicted of “trespass and hurt”, in a 19-year-old case. Nikhil Dey, former sarpanch Naurti Bai of Harmada in Ajmer, Ram Karan, Babulal and Chotu Malakar were convicted under Sections 323 (punishment for voluntarily causing hurt) and 451 (trespass) of the Indian Penal Code for raising their voices against alleged corruption by Pyare Lal Tak, then sarpanch of Harmada. The sentence has been suspended pending appeal by the activists in the higher court of Kishangarh additional district judge. This has brought to light the plight of RTI activists in the country who are constantly intimidated, attacked and murdered for seeking information against corruption.

It all began in 1998 when the activists had sought information on payments for development works in the village. Before the RTI Act was promulgated Dey, Aruna Roy and other activists were involved in educating rural citizens that RTI was their fundamental right. As part of this, they were seeking information from Pyare Lal, who was also a liquor contractor of the village.

Dey and four others had alleged that the payments for toilets, Indira Awaas houses and labour payments for development works had not been made to the beneficiaries. They had visited the sarpanch’s office 73 times but failed to get the information.

The Mazdoor Kisan Shakti Sangathan (MKSS), the organisation under which the activists worked, said in a press note: “Because his (sarpanch) office was usually closed during working hours, the activists went to his house to ask for the information with an order from the BDO (block development officer). The sarpanch came out of his house and physically assaulted the activists. Despite the attack, the activists decided not to file an FIR, thinking that right to information cannot depend on police cases and that it had to depend on dialogue with the sarpanch and the exercise of a legal right under the Panchayati Raj Act.” On the same day, Roy had written to the district collector to ensure the activists get the information.

After a few days, the sarpanch filed an FIR, accusing the activists of assaulting him. Following this, Naurti Bai also filed a case against him under the Scheduled Castes and Tribes (Prevention of Atrocities) Act, 1989. Both the FIRs were closed in June 1998, and the police filed final reports. But in 2001, the court re-opened the case following a petition filed by the sarpanch, which the activists were unaware of. Though the case continued for 19 long years and Pyare Lal allegedly produced one false witness after another, the FIR that the activists had filed was not re-opened.

RTI activists have expressed their concern and dismay at the verdict. The MKSS and Roy called the verdict “an utterly false case filed by a corrupt, powerful sarpanch who misused his influence and power and physically assaulted them for demanding information in a case where the activists were fighting for the rights of the poor thro-ugh means that were completely within the ambit of the law.” They said it was “a body blow to the effort of citizens to fight corruption and stand up for the rights of the citizen”.

The civil society organisation, People’s Union for Civil Liberties (PUCL) also condemned the sentence. It disagreed with the court and said: “PUCL feels several facts and evidence presented in the defence were not considered by the court…. We will appeal against this and are certain truth will prevail.” 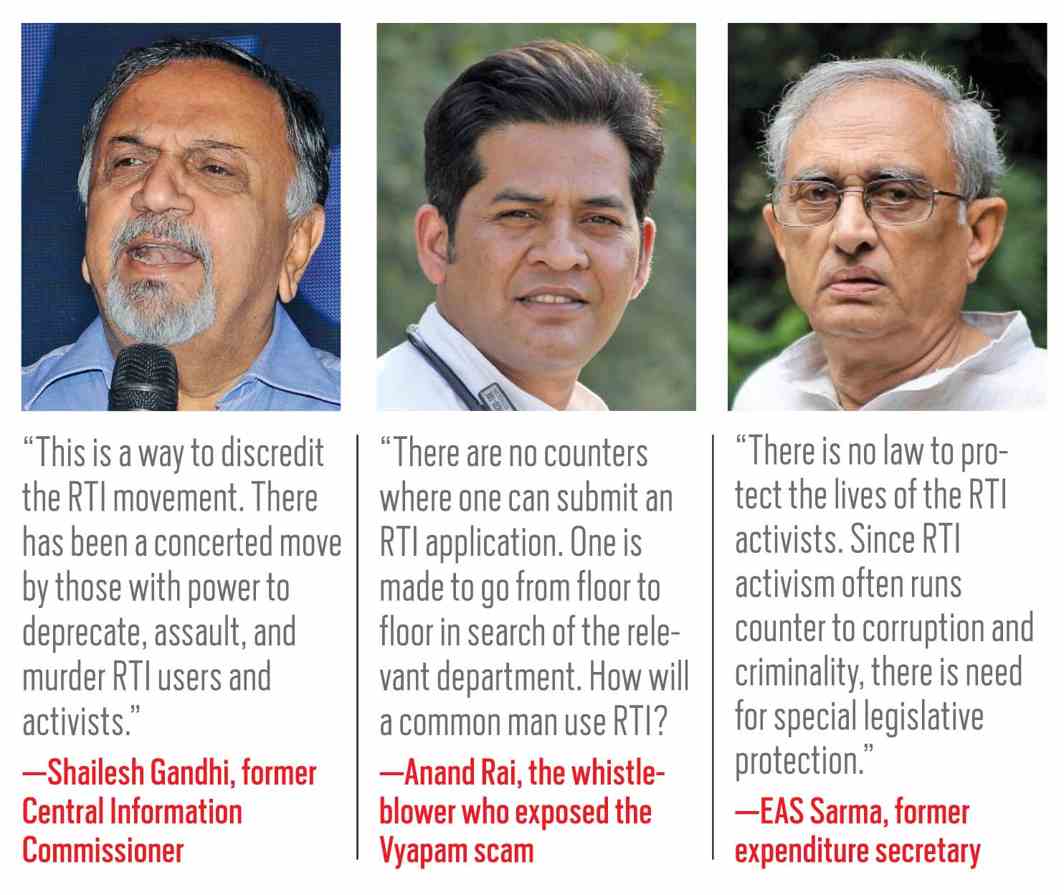 This is not a solitary incident where those seeking information from the administration have been falsely targeted. Former Central Information Commissioner and an RTI activist Shailesh Gandhi told India Legal: “Perhaps this is a way to discredit the RTI movement. There has been a concerted move by those with power to deprecate, assault, and murder RTI users and activists. False cases have also been filed in many places. Perhaps, the system now wishes to coerce citizens seeking to exercise their fundamental right that they will also be sent to prison. If they can do this to the pioneers and champions of RTI, the message to the others is chilling.” Gandhi has started a petition against the verdict on the online platform Change.org, asking the President to take action against it, which has garnered a total of 1,223 signatures so far.

RTI has become a bugbear for those who see transparency as a threat and they go to any extent to deny information. There have been murders of at least 59 RTI activists and this does not include unreported cases. According to a 2005-2016 analysis done by a Delhi-based advocacy group Commonwealth Human Rights Initiative (CHRI), there have been more than 311 instances of harassment, including murder, attacks and intimidation.

This is mainly because there is no law to protect RTI activists. Even though the RTI Act, 2005, is in place, it does not hold any special provision to safeguard the security of those who use the RTI Act. Former expenditure secretary and an RTI activist, EAS Sarma told India Legal: “There is no law to protect the lives of RTI activists except the safeguards that any citizen has against violence. Since RTI activism often runs counter to corruption and criminality, there is need for special legislative protection.”

Ever since the RTI Act came into effect in 2005, efforts have been made to undermine its effectiveness. Terms like “frivolous RTIs” have often been used by the government to discredit the institution of RTI. In fact, in a recent move, the government tried to introduce a new rule which, if it were passed, would pose more risk to the lives of the activists. It proposed that “a second appeal can be withdrawn by the appellant and it would abate on the death of an appellant”, which means if an RTI applicant dies, the information sought by him/her will not be made public. Gandhi feels this will be exploited: “Allowing withdrawal of RTI appeals would be a direct encouragement to (put) undesirable pressure on applicants, and deal making. The law expects all information to be available suo motu.”

The rule would also lead to tardy delays of cases like Dey’s. Says Sarma: “Suppose the PIO/ Appellate Authority/ Information Commission take a long time to dispose of the petition under the RTI Act and suppose the RTI applicant expires meanwhile, would it not be creating scope for undue delays and injustice to the applicant? Usually, the PIOs do not respond to the applicant’s information requirements fully and accurately. There is a time limit for the PIO but there are no time limits for the Appellate Authority and the Commission. Without prescribing reasonable time limits for the Appellate Authority and the Commission, it will be inappropriate for the government to seek an amendment of this kind.”

“The impact of this amendment is that it will further incentivise the appellate authorities and the PIO to delay matters,” he said.

Venkatesh Nayak, programme coordinator of access to information programme, CHRI, feels that such a rule is being proposed to weaken the activist’s right to sue the government. Anand Rai, the whistleblower who exposed the Vyapam scam, however, feels no law can protect them until there is proper implementation.

He told India Legal there is no proper department in the government offices to guide the applicants about the procedure. “There are no counters where one can submit the RTI application. One is made to go from floor to floor in search of the relevant department. There is no manpower, no awareness campaign and no guidance about the RTI Act. How will a common man use it? Also, even if he does, he is made to file so many appeals and petitions, one loses the patience to go through with it, leave alone bear the cost.”

Just a mere Act cannot protect the rights of those seeking the truth. And, when this is brought to the notice of the government, it talks only about amendments. As Shailesh Gandhi puts it: “No amendments will work when the law and all ethics and honesty are retired.”