Above: According to a study, there are currently 5,133 posts vacant in subordinate courts/Photo: Anil Shakya

The Modi government’s revival of the proposal of All-India Judicial Service has raised eyebrows as critics feel it could play havoc with federalism, a basic feature of the Constitution

The resounding mandate received by the Narendra Modi government in the Lok Sabha elections has made many wonder whether it could be explained in terms of the presidential-style campaign of the prime minister. If it is indeed the result of such a campaign, one of the interesting consequences for governance would be the centre’s determination to push through long-pending reforms despite a lack of consensus among the stakeholders.

One such reform is Law Minister Ravi Shankar Prasad’s announcement that the centre would write to high courts and state governments seeking their opinion on the creation of an All-India Judicial Service (AIJS). This was prioritised by the new government soon after returning to power.

The proposal to constitute such a service has always remained on paper because of resistance from powerful lobbies. These lobbies include high courts and state governments who apprehend that it could play havoc with federalism, a basic feature of the Constitution. If these two (AIJS and federalism) are inconsistent, the defenders of AIJS ask, why does the Constitution provide for AIJS? Article 312 (1) says if the Rajya Sabha has declared by a resolution, supported by not less than two-thirds of the members present and voting, that it is necessary in the national interest to do so, Parliament may by law provide for the creation of one or more all-India services and regulate the recruitment and conditions of those appointed to it.

Article 312 (2) says services known at the commencement of this Constitution as the Indian Administrative Service and the Indian Police Service shall be deemed to be services created by Parliament under this Article. Other all-India services too have been created, but they do not face the kind of criticism which the proposal to constitute AIJS does.

Article 312(3) says the all-India judicial service referred to in Clause (1) shall not include any post inferior to that of a district judge as defined in Article 236. As High Court and Supreme Court judges are selected through the collegium mechanism comprising judges from both courts, AIJS applies to only the selection of district judges.

But the provision relating to AIJS was inserted in the Constitution through the infamous 42nd Amendment during Emergency. While many of the draconian provisions of this amendment curbing the fundamental rights of citizens were subsequently reversed by the 44th Amendment during the later Janata Party regime, the amendment to Article 312 envisaging the creation of AIJS survived because it was felt it was innocuous. Besides, Entry 70 of the Union List provides Parliament the exclusive authority to enact a law creating Union Public Services, all-India Services and Union Public Service Commission. As all-India services include AIJS within its ambit, Parliament’s competence to legislate on the matter has never been in doubt.

But the itch to centralise, noticeable among the powers-that-be during Emergency and now, is what causes concern among critics of the proposal, although it was first mooted by the Law Commission in the 1950s.

In December last year, Niti Aayog released a vision document, titled “Strategy for New India @ 75” which proposed a slew of judicial reforms, including AIJS. But it disappointed observers because it sought to ignore complex facets of the debate. Niti Aayog also proposed to recruit prosecutors and legal advisers under AIJS, which goes beyond the mandate of the Constitution.

The first and foremost question which arises is whether AIJS could help fill up the vacancies in the subordinate judiciary in time. The idea of recruiting district judges through an all-India examination and allocating them to each state along the lines of other all-India services does appear attractive on paper. After all, it promises transparency and efficiency, besides a possibility that the best legal talent would be tempted to join as district judges.

The late Prof NR Madhava Menon, the doyen of legal education in the country, wrote in January in India Legal: “Given the regular supply of talented law graduates from National Law Schools and similarly placed institutions, there are now in the profession, advocates with seven to 10 years of practice experience who would be inclined to join the district judiciary as they have a chance to get promoted to the higher judiciary in reasonable time. They don’t have to retire as district judges if they show good performance at the district level. The job profile and status in the judiciary are certainly more attractive than what is on offer in other central services.”

He added: “If the judicial academies give proper training and High Courts provide the freedom within identified parameters to innovate at work, district judges’ efficiency will increase considerably and this would reduce appeals arising from their decisions. For motivated young men and women, job satisfaction and personal reputation are more important than money and power. They are less likely to become corrupt as they consider their professional career more significant than anything else.”

Critics of AIJS say that district judges, if recruited through an all-India examination, may be unable to perform their duties well as they would not be proficient with the local language.

Prof Menon’s response to this was that youngsters learn languages quickly, and many law graduates are already proficient in more than one Indian language as they spend five years and more studying law at a law school outside their home states.

He also cited debates of the Constituent Assembly to answer the criticism that AIJS is inconsistent with the principle of federalism. He cited Ambedkar as having said: “When diversity created by division of authority in a dual polity goes beyond a certain point, it is capable of producing chaos. The Draft Constitution has sought to forge means and methods whereby India will have Federation and at the same time will have uniformity in all basic matters which are essential to maintain the unity of the country. The means adopted by the Draft Constitution for this purpose are: (i) a single judiciary, (ii) uniform laws, civil and criminal, and (iii) a common all-India Service to man important posts.”

In Prof Menon’s words, a unified judiciary helps to institutionalise the idea of cooperative federalism. In his view, the funds required for an integrated all-India judiciary have to be necessarily provided by the centre. “Such an approach will strengthen the federal scheme of governance while enabling the judiciary to manage its internal administration efficiently without having to depend on the government for getting even basic facilities,” he wrote.

According to a study by Daksh, a civil society organisation, there are currently 5,133 vacant posts out of the sanctioned strength of 22,036 judicial posts in subordinate courts. Out of the 5,133 vacancies, for 1,324 posts, the recruitment process has not even been initiated.

Subordinate court judges are appointed by the governor of the concerned state after consulting the respective high courts. The Daksh study shows that judicial positions in many lower courts are currently vacant because the procedure for appointment has been delayed or the notification for initiating the process of recruitment has not been issued.  The recruitment of judges is a three-step process involving a written preliminary examination, a written main examination and lastly, an interview. Candidates who have cleared all three are shortlisted for being appointed as judges.

The Supreme Court, in Malik Mazhar vs Uttar Pradesh Public Service Commission, held that the process of recruitment, which starts from the date of issue of the advertisement and culminates with the date of appointment, should be completed in 153 days for junior civil judges and 273 days for district judges. The Daksh study has revealed that this directive is being sidestepped across the country. The Delhi High Court, for instance, took 403 days to finish the recruitment process which began in 2017.

The Vidhi Centre for Legal Policy has blamed inadequate infrastructure and manpower to conduct the examinations and lack of awareness among potential candidates about the examinations as reasons for the vacancies not getting filled up in time.

Even as the centre is toying with the idea of creating AIJS, the Supreme Court is exploring the feasibility of bringing the examinations under one centralised system. Obviously, the centralised system, as envisaged by the Supreme Court in this case, will be inconsistent with Articles 233–237 of the Constitution which require state governments and high courts to have exclusive powers to conduct and choose the method of selection of lower court judges.

It is to be seen how the Supreme Court overcomes this hurdle as Parliament alone has the power to amend the Constitution. 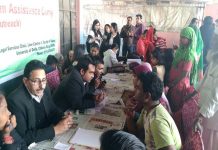 Ignorance Is Not Bliss, But…