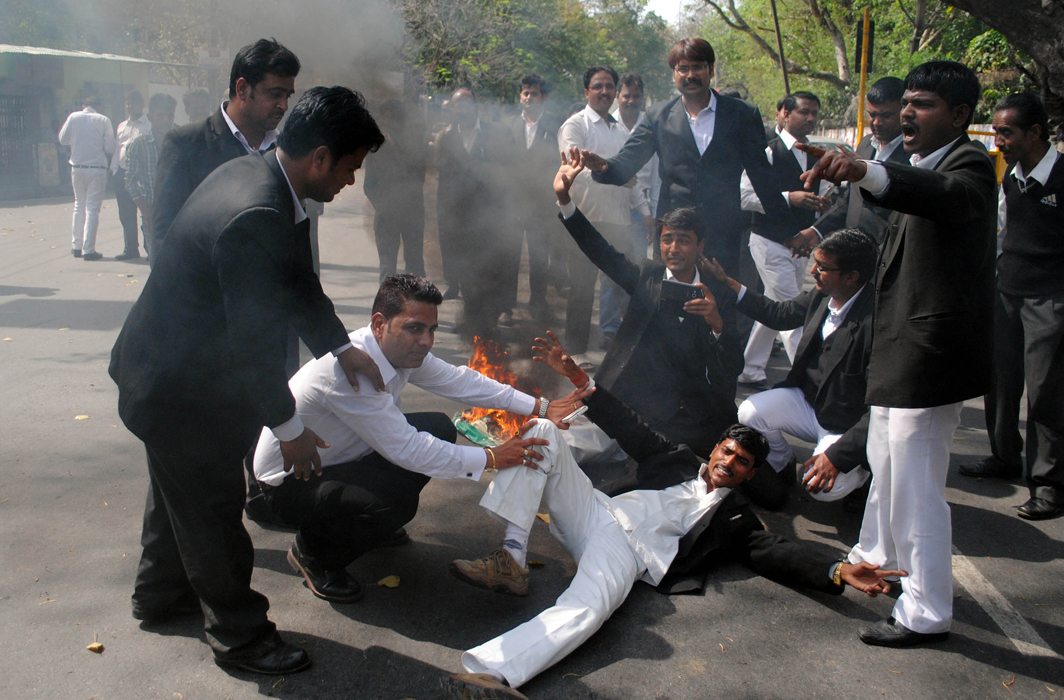 With rising instances of intimidation, verbal and physical, by lawyers in various courts across the country, the Supreme Court calls for an urgent review of the Act under which the legal profession regulates itself

Not many people have heard of Mahipal Singh Rana. It’s time they did. He is an advocate who has created dubious history by forcing the Court’s hand into taking a hard look at the manner in which the legal profession regulates itself and deals with errant members.

Rana was not the sole reason—lawyers have attacked JNU student Kanhaiya Kumar in the Patiala Court in Delhi; their counterparts appeared before the Madras High Court in an inebriated state, and similar incidents have been witnessed in other courts—but it was largely because of Rana’s case that the Apex Court requested the Law Commission of India to look into the provisions of the Advocates Act, 1961.

In April, 2003, Rana barged into the Court of the Civil Judge (Senior Division) in Etah, Uttar Pradesh, and, according to the complaint filed by the Judge, declared: “Kanchan Singh is my relative and how was this order passed against my relative? No judicial officer has ever dared pass an order against me. Then, how did you dare do so? When any judicial officer passes an order against my client, I set him right.”

He also boasted about his criminal past, saying: “I have relations with highly notorious persons and I can get you harmed by such notorious persons to the extent I want to do, and I myself am capable of doing any deed as I wish, and I am not afraid of any one…. I was prosecuted in two murder cases. And I have made murderous assaults on people and about 15 to 20 cases are going on against me. If you, in future, dare pass an order on the file against my client in which I am a counsel, it will not be good for you.”

A month later, appearing before the same Judge, Rana insisted that another of his cases be taken up and heard out of turn. When the judge refused, he created a commotion in the courtroom.

The judge lodged a complaint, which eventually reached the Allahabad High Court for reference. The Allahabad Court summoned Rana and after hearing his version, held that “Shri Mahipal Rana, the contemnor, is guilty of criminal contempt in intimidation and threatening Shri Onkar Singh Yadav the then Civil Judge (Senior Division) Etah in his Court on 16.4.2003 and 13.5.2003 and of using loud and indecent language both in Court and in his pleadings in suit No. 515/2002.”

Rana then appealed to the Supreme Court where a three Judge bench, on July 2016, held him guilty of contempt.

The Rana case provided a timely trigger since the court, taking note of various instances of unruly behavior by lawyers across the country, opined: “There appears to be urgent need to review the provisions of the Advocate’s Act dealing with regulatory mechanism for the legal profession….” The Court then requested the Law Commission of India to “go into all relevant aspects relating to regulation of legal profession in consultation with all concerned at an early date. We hope the Government of India will consider taking further appropriate steps in the light of report of the Law Commission within six months thereafter.”

How can errant lawyers be tamed?

District-wise physical scrutiny to identify the advocates who have licenses from respective Bar Councils. A list of such advocates should be with every Reader of the Court. The Reader will see whether the advocate appearing is enrolled as an advocate or not. This will exclude appearances by fake advocates.

The Supreme Court should have a contempt bench like it used to have a Green Bench. That will send a message to advocates who have a tendency to commit contempt of court.

The Rana case, which was essentially one of contempt of court, was viewed against a larger canvas because of the inaction of the Bar Council of Uttar Pradesh. Ordinarily, the governing bodies of various professions, such as lawyers, chartered accountants, doctors, architects etc., regulate their respective professions by various methods, including rules to entertain complaints against errant members and punish those found guilty, which may include removal from the profession.

Recently, the conduct of some lawyers in the district criminal court of Patiala House, where JNU student Kanhaiya had been produced, led to them receiving show cause notices by the Bar Council of Delhi. That incident, played out in the public eye, shocked many. There have been other recent instances of lawyers’ unruly behavior being in the public eye, such as the lawyers who appeared before the Madras High Court in an inebriated condition. It led the Madras High Court to issue rules empowering the High Court to debar lawyers who appeared in such a condition before the Court.

The ball is now with the Law Commission, which is examining the Advocates Act, 1961, which deals with such issues. It has sent out requests to the Bar Council of India (BCI), state bar councils, judges and bar associations for inputs and suggestions on how to deal with misconduct.

The BCI has constituted a committee which is working on a report to be submitted to the Law Commission. Opinions vary on the issue. KC Mittal, former chairman of the Bar Council of Delhi and former president of the Delhi High Court Bar Association, feels that there is no need to make amendments to the existing law (primarily Section 35 of the Advocates Act, governing misconduct by lawyers). He believes the problem lies with the individuals who compose the committees, as in Rana’s case when there was lack of action by the UP Bar Council. The discussion, he feels, should revolve around how to get the existing mechanism to function as it should, rather than in trying to change the system. He adds that the logic behind the mechanism set out in the Advocates Act which requires elections to the Bar Councils, was to democratize the profession and ensure regulation by people who have experience in the profession.

Regarding strikes by lawyers, he points out a mechanism is needed for lawyers to be able to air grievances for redressal, thus obviating the need for strikes.

Senior Advocate CS Vaidyanathan, former Additional Solicitor General of India and former ex-officio member of the Bar Council of Delhi, feels that most professional bodies have been remiss in taking necessary action against erring members.

He says that experience has shown that, often, those guilty or accused of misdemeanors form part of the vote bank of the persons elected thus creating problems for enforcement and implementation of conduct rules. Vaidyanathan feels that an independent non-partisan body should be created to regulate professional conduct in the legal profession.

Justice Ashok K Srivastava, a former judge of the Allahabad and Delhi High Courts opines: “Almost 80 percent of the Bar is good, hard-working and disciplined. The trouble makers are only 20 percent whose practice is entirely on activities other than those permissible under the law. They propagate that they are so powerful that they can obtain any order from the Subordinate Courts. They are neither controlled by the Bar Associations nor the Apex Courts. The seniors in the Bar, for protecting their own respect, avoid them for the risk of ugly incidents. The most unfortunate part is that many of them get elected as Presidents and Secretaries in many Bar Associations, acquiring power to intimidate the judicial administration in all respects.”

He emphasizes that in order for it to be effective, action against erring advocates by bar councils and the courts needs to be swift and stringent. Delayed action only emboldens wrongdoers.

Against that backdrop, it seems the Law Commission will have a complex and delicate task to perform. It’s the classic case of “physician heal thyself”.

Lead Picture: Lawyers protesting in Allahabad in the wake of killing of a lawyer by a policeman. Photo: UNI