This government is big on surgical strikes, and now we have one more. Nearly seven decades after partition, the Centre is pushing an ordinance which revives the Enemy Property Act of 1968. Armed with this, it aims to dispose of over 16,000 properties valued at several crores. Most of these are occupied by relatives or legal heirs of those who fled to China after the 1962 war or to Pakistan after the 1965 and 1971 conflicts. Some properties were left behind by those who moved after partition to East and West Pakistan.

The Enemy Property Act, 1968, labeled these as “enemy properties” and vested these properties to be taken care of by the government.

In early February, a Supreme Court bench of Chief Justice JS Khehar and Justice NV Ramana gave a judgment which said that enemy property should not get transferred to the descendants of the erstwhile owners and must go to the government.

“We are of the view that enemy property should not get transferred to the descendants of the erstwhile owners. It must go to the government. We are very clear about it,” the bench said.

The relatives and legal heirs who opted to stay back wanting to retain their Indian identity, now face loss of legally inherited properties. One of them, who could lose numerous properties in north India, told India Legal: “It hurts when we are now seen as ‘enemies’ and the property we rightly inherited is being taken over by the government just because our ancestors chose to move to Pakistan.”

The Supreme Court refused to entertain Congress Rajya Sabha MP Husain Dalwai’s writ petition challenging the validity of the Centre’s decision to re-promulgate the enemy property ordinance for the fifth time, terming it a violation of a recent constitution bench decision.

Earlier, a constitution bench of the Supreme Court had sent a strong message to the government on arbitrary ordinances it promulgates. It asked why the government had for the fifth time re-promulgated the Enemy Property Ordinance. It said that it was a clear violation of an earlier order of the court. It was hearing a PIL filed by Dalwai challenging the ordinance.

In his petition, Dalwai said: “The action of the government in re-promulgating the ordinance, bypassing the legislative process of Parliament, is not only arbitrary, it’s also a fraud on the Constitution itself.”

The Enemy Property (Amendment and Validation) Ordinance, 2016, was promulgated by the President in January last year to amend the Enemy Property Act, 1968, and the Public Premises (Eviction of Unauthorised Occupants) Act, 1971. The government moved a bill on it to be passed in the Lok Sabha but when it was presented in the Rajya Sabha on March 15, members wanted it referred to a select committee. Parliament was adjourned hours after this happened. 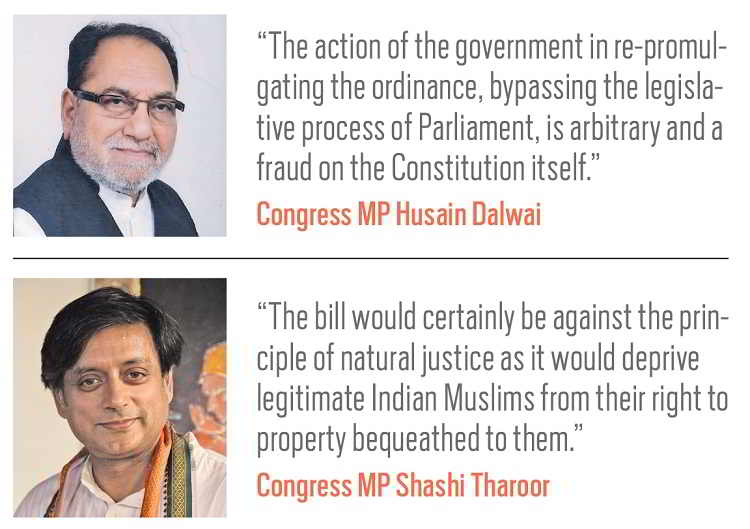 Last year, the President had remarked that ordinances should be promulgated only when there was urgency. In fact, the Supreme Court in a recent judgment had stated that re-promulgation of ordinances was constitutionally impermissible since it represented an effort to overreach the legislative body that is the primary source of lawmaking authority in a parliamentary democracy. Re-promulgation defeated the constitutional scheme under which a limited power to frame ordinances had been conferred upon the President and governors, it said.

Sources in the government argue that there is nothing wrong with what the Modi government is doing as Pakistan had already disposed of all properties that were left behind by those who fled to India. One of those whose properties in Uttar Pradesh would be lost if the law came into force, said on condition of anonymity, that the government move would not be able to stand scrutiny if challenged in any court of law. Congress MP Shashi Tharoor has said that the bill would certainly be against the principle of natural justice as it would deprive legitimate Indian Muslims from their right to property bequeathed to them.

Thousands of Muslims now holding the property of their ancestors, who chose to move to Pakistan, are worried that they may soon lose it to the government, which under the new law, can acquire and dispose it off. Clearly, we have not heard the last of this controversy as it will continue to simmer when it comes up in parliament.