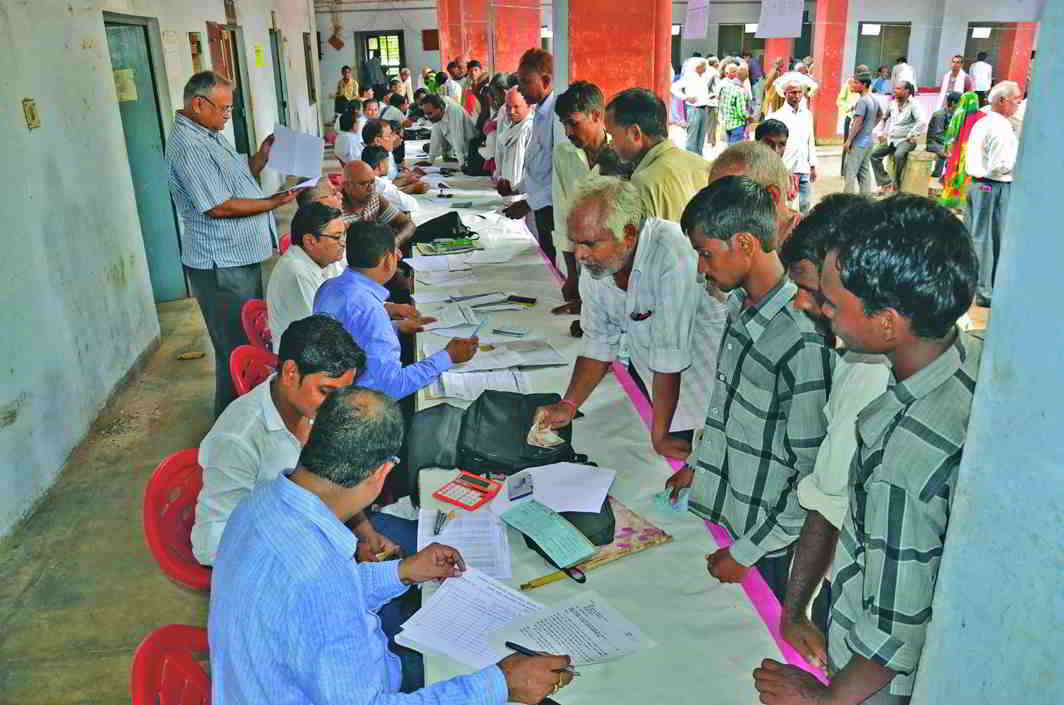 Above: The subordinate judiciary in several states grapples with long pendency of cases, with some dragging on for over a decade. Photo: UNI

The huge backlog of cases has been the bane of the judiciary. Recent data shows that some states have been successful in reducing it in the subordinate judiciary, but how they achieved it is not all that clear

The huge pendency of cases at all levels has been the bane of the judiciary. But data from the National Judicial Data Grid (NJDG), a monitoring tool to identify, manage and reduce pendency of cases, gives room for some optimism. For the first time, the subordinate judiciary in four states and a Union Territory, namely, Haryana, Punjab, Himachal Pradesh, Kerala and Chandigarh, succeeded in bringing down to less than one percent, the number of cases which have been pending for over 10 years or more.

According to data available on the website of NJDG, the number of cases pending for over 10 years across the country in the lower judiciary is 22,86,629, which is 8.93 percent of the total pending cases. Of these, 6,16,162 cases are civil and 16,70,467, criminal. Haryana, Punjab, Himachal Pradesh, Kerala and Chandigarh have just 11,000 cases in total pending for over 10 years.

Cases pending between five to 10 years constitute 16.08 percent of the total such cases. Cases pending between two to five years constitute 28.49 percent and those pending for less than two years form a major part, ie., 46.5 percent of the total such cases. A further break-up of the data shows that among the pending cases, those in which senior citizens are litigants constitute 4.29 percent and those filed by women, 10.21 percent.

The huge backlog of cases, and the number of years some cases have been pending reflect the inefficiency of the system. It hardly inspires the confidence of the litigants. Needless to say, in order that the rule of law has meaning and value, resolution of cases before the courts within a reasonable time is a prerequisite.

According to a recent study by Daksh, an NGO based in Bengaluru, which undertakes research and activities to promote accountability and better governance in India, the number of hearings dealt with by a judge daily is a key factor to assess the reasons for the delay. Putting a cap on the number of hearings will allow reduction in judicial workload and may improve efficiency and reduce the number of times litigants have to visit courts, the study, “State of the Indian Judiciary”, claims.

Daksh’s study also claims that the frequency of hearings is closely linked to efficiency. The time spent on a case, the frequency/infrequency of hearings and change in judicial personnel not only impact understanding of pendency but also adversely affect the concept of fair hearing. This is a fundamental promise that the judiciary makes to the litigants, the study explains. 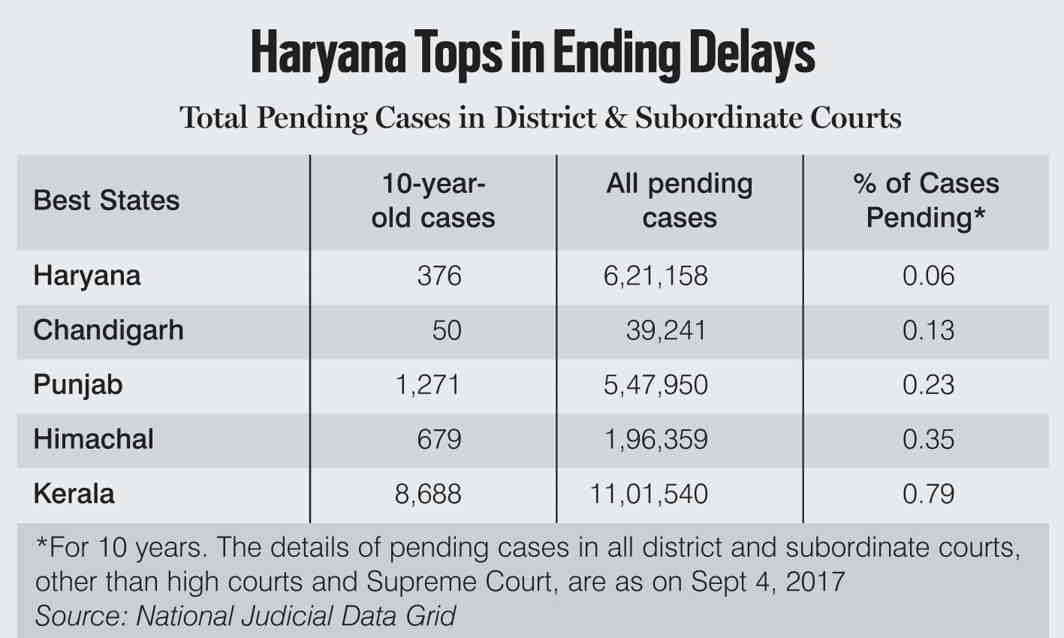 Put in this context, does the NJDG data regarding the almost zero pendency of 10-year-old cases in four states and a Union Territory, mark an achievement of sorts? Not necessarily. That this kind of data is considered as an occasion for self-congratulation only underlines the poor state of affairs in the lower judiciary, experts say.

First and foremost, the NJDG data, say experts, does not cover all the courts of the lower judiciary in all the states. Second, it is asked whether the subordinate judiciary in those four states and one Union Territory, while focusing on disposing 10-year old cases, was indifferent to many five-year old cases turning six-year-old. While removing the backlog of 10-year-old cases does seem to be an achievement, the fact that other categories of pending cases might have suffered as a consequence is not considered by the policy-makers and data interpreters, it is pointed out.

The NJDG data, for instance, does not reveal the corresponding data of cases for each year pending between 5 to 10 years.

Therefore, rather than celebrate these so-called achievements, the overall rate of case clearance would be a reliable indicator of the efficiency of subordinate judiciary in states, says an expert. It is not a coincidence that the four states and Union Territory which have been successful in clearing the backlog of 10-year-old cases in the lower judiciary are all small. Except Kerala, in the other three states and Chandigarh, the number of case-filings is less than the other states. In Kerala, the percentage of case filing is higher probably because of its higher literacy and other positive development indicators. Thus in August alone, 48,853 new cases were filed in Kerala.

In Uttar Pradesh, the number of judges in the lower judiciary is bound to be more than the other states because of its size. But the question to be asked is whether the number is proportionately more than the other states. The case clearance rate of subordinate judiciary, therefore, must tell us whether the state is able to clear its backlog of cases irrespective of the number of years it takes to dispose them, at a much faster rate than the other states. Only then can we reach definite conclusions about the comparative efficiency of the state’s judiciary in relation to another. But the parameters for ascertaining this are not readily available even on the NJDG.

In the absence of relevant data, therefore, one has to necessarily consider whether the success of the lower judiciary in Punjab, Haryana and Chandigarh —which are under the control of the Punjab and Haryana High Court—has got to do with certain parameters. This includes the Court fixing annual targets and action plans for judicial officers to dispose of old civil and criminal cases where the accused is in custody for over two years. Quarterly (rather than monthly) review of judicial officers’ performance by the High Court might have been a safeguard against hasty disposal of cases at the cost of the quality of justice. But we cannot conclusively say that other high courts do not follow similar strategies to monitor the performance of the subordinate judiciary.

States like Assam, Madhya Pradesh, Andhra Pradesh, Karnataka and Delhi have also reportedly recorded very low pendency of 10-year-old cases. Gujarat, Uttar Pradesh, Odisha, Bihar and Bengal, on the contrary, have high pendency of such cases. It is, therefore, possible to compare the state of infrastructure, the number of vacancies of judges and the quality of judicial recruitment examinations in these states to arrive at definite conclusions about the factors that facilitate speedy disposal of cases. 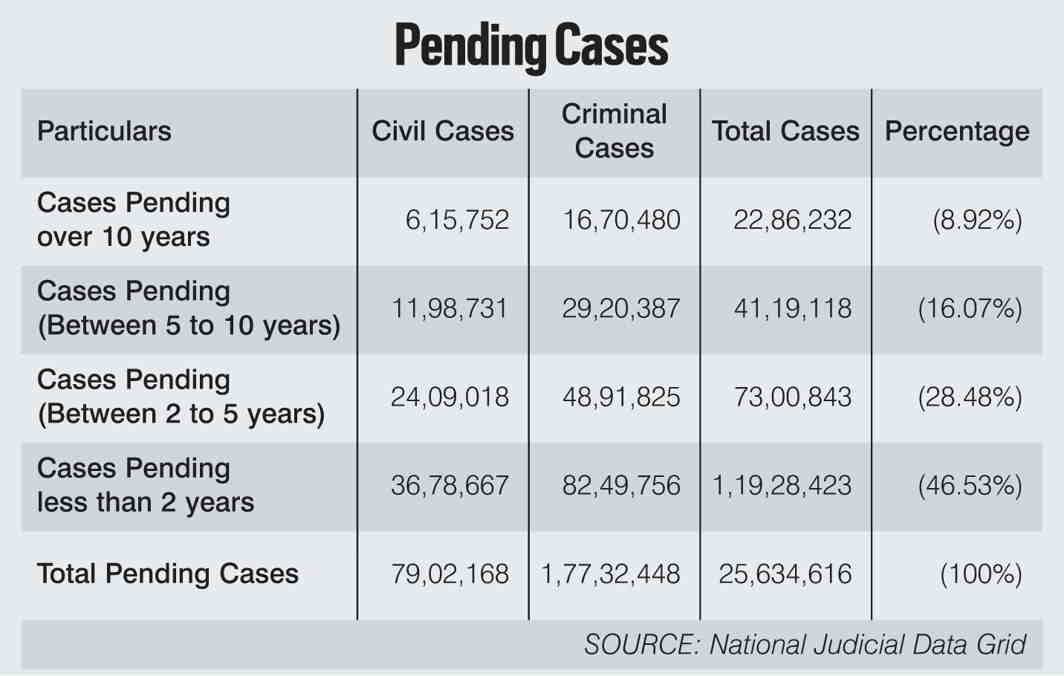 The national district judge recruitment examination, mooted by the Supreme Court, to streamline the recruitment in subordinate judiciary and to ensure merit and transparency met with stiff criticism. An attempt by the former Chief Justice of India, Justice JS Khehar, to judicially deal with the issue during his tenure met with resistance from many high courts. Now, the matter will be freshly considered by the apex court as and when the case is heard again.

Other measures proposed to improve the performance of subordinate judiciary include restricting adjournments, curbing summer vacations and ensuring audio-visual recording of court proceedings, along with effective monitoring of case status online. But studies which would confirm correlation of effective parameters with speedy, but qualitative disposal of cases are the need of the hour. This will ensure that our studies go beyond assumptions and hypotheses.

With vigilante groups often dealing out punishment to perceived offenders, one needs to ask whether delays in the justice delivery system have contributed to this ill.