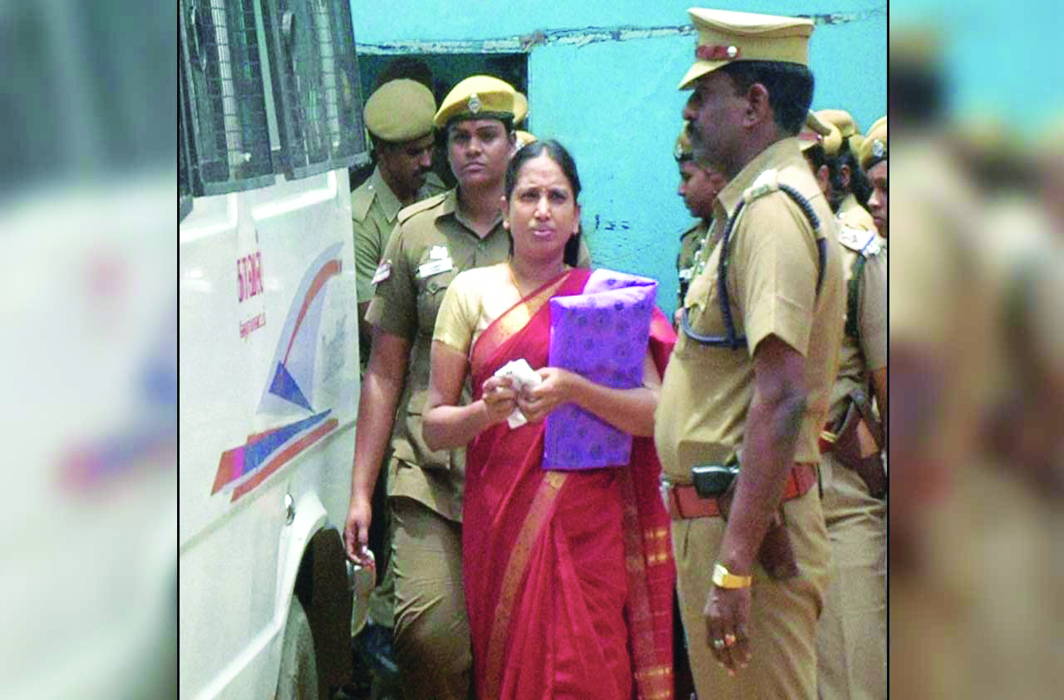 Above: Nalini Sriharan’s death sentence was upheld by the Supreme Court. In 2000, this was commuted to a life sentence/Photo: youtube.com

As the centre asserts its power to not remit the sentences of the seven convicts in this dastardly case, Tamil Nadu’s options appear to be limited

~By Venkatasubramanian in Chennai

The seven convicts in the Rajiv Gandhi assassination case—Sriharan alias Murugan, AG Perarivalan alias Arivu, T Suthendraraja alias Santhan, Jayakumar, Robert Payas, Ravichandran and Nalini—have already spent 27 years in prison as part of their life sentence. While life convicts are eligible for remission of their sentences after completing 14 years in prison, it is not mandatory. Besides, the Supreme Court has made it clear that the state government is req­uired to consult the centre before it remits the sentence of prisoners when the offence has been investigated by central agencies such as the Central Bureau of Investigation (CBI).  Therefore, when the centre informed the Supreme Court on Au-gust 10 that it had rejected the proposal of the Tamil Nadu government to release the seven convicts, it was clear that it did not treat them on a par with similar prisoners whose sentences might have been remitted in accordance with law.

“The assassination was an unparalleled act in the annals of crimes committed in this country,” the centre told the state government in a letter. “The brutal act brought the Indian democratic process to a grinding halt inasmuch as the general elections to the Lok Sabha and assemblies in some States had to be postponed,” it added. The centre noted that “16 innocent lives were lost, and many sustained grievous injuries in the gruesome, inhuman, uncivilised and merciless bomb blast”. The centre ruled out remission of their sentences as in its view, the assassination showed “exceptional depravity”, including the use of a woman as a human bomb.

The apex court bench of Justices Ranjan Gogoi, Navin Sinha and KM Joseph took on record the centre’s letter to Tamil Nadu and posted it for further hearing. The bench is examining the plea of the convicts that the denial of remission of their sentences amounts to discrimination, arbitrariness and unreasonableness.

Remissions are of two kinds. One depends upon the good conduct of a convict, referred to as “earned remission”. This case involves the interpretation of Section 435 of the Code of Criminal Procedure (CrPC) which imposes a restriction upon the state government to consult the centre while exercising its powers under Sections 432 and 433 of the Code—dealing with remission powers—under certain contingencies. In the Rajiv Gandhi assassination case, though 26 accused were convicted by the Special Court, the Supreme Court confirmed the conviction against only seven, acquitting the rest. It confirmed the death sentences of four, namely, Nalini, Santhan, Murugan and Arivu, and commuted the death sentences of the remaining three to imprisonment for life. Subsequently, even the death sentences of Santhan, Murugan and Arivu were commuted to life imprisonment by the Court because of the inordinate delay in disposing of their mercy petitions by the president. Nalini’s death sentence was commuted by the governor of the state in 2000.

In a landmark judgment on Dec-ember 2, 2015, the constitution bench of the Supreme Court held that the word “consultation” in Section 435 means concurrence of the centre. During the hearing of this case, the centre conceded before the Court that since the period of imprisonment under various central acts invoked against the accused had already been suffered by them, the requirement of remission or commutation by the centre did not arise, and it was for the state government to pass such an order un­der Section 435(2) of the CrPC. However, the centre insisted that since the CBI investigated the case, its own concurrence to remit sentences by the state government is mandatory.

In the 2015 judgment, the Supreme Court made it clear that the right to claim remission, commutation, reprieve, etc. as provided under Article 72 or Article 161 of the Constitution will always be available as constitutional remedies. In the context of the rejection by the centre of Tamil Nadu’s plea to remit the sentences under Section 435 of the CrPC, the state government can perhaps explore whe­ther it can use its powers under Article 161 of the Constitution, and recommend to the governor to remit the sentences. There is no restriction on it to consult the centre before invoking its powers under Article 161. The Supreme Court held in 2015 that the powers under Section 432/433, CrPC, on the one hand, and those under Article 72 and 161, on the other, are distinct and different. The Tamil Nadu government had contended, however, that the power to remit sentences would not undermine the nature of crime committed as the two issues are clearly distinguishable. The centre, which has now cited the nature of the crime committed by the convicts as the ground for rejecting their plea for remission, has clearly disagreed with the state government’s view.

The Supreme Court, which is yet to examine this issue, had held in 2015 that comparatively greater weight ought to be attached to the opinion of the centre which, through the CBI or other central investigating agencies, was in charge of the investigation, and had complete carriage of the proceedings. In their dissenting judgment (which has not been disputed by the majority judges) in the 2015 case, Justice Abhay Manohar Sapre and Justice UU Lalit observed: “Each of the convicts, having undergone about 23 years of actual imprisonment, there is definitely change in circumstances. An earlier exercise of power under Article 72 or 161 may certainly have taken into account the gravity of the offence, the effect of such offence on the society in general and the victims in particular, the age, capacity and conduct of the offenders and the possibility of any retribution. Such assessment would naturally have been as on the day it was made. It is possible that with the passage of time the very same assessment could be of a different nature. It will, therefore, be incorrect and unjust to rule out even an assessment on the subsequent occasion.”

The two dissenting judges differed from the majority three judges only on the question of whether the courts are justified in imposing a sentence of imprisonment beyond the remission powers of the centre and the states. While the majority judges held that it is permissible, the minority judges disagreed. The issue before the three-judge bench currently is different, as none of the convicts in the Rajiv Gandhi assassination case are under a sentence of imprisonment which is beyond the remission powers of the state and central governments as expressly stated by the Court. Therefore, the views of the minority judges regarding change in the circumstances warranting a fresh assessment of the eligibility of the convicts for remission, assumes significance.