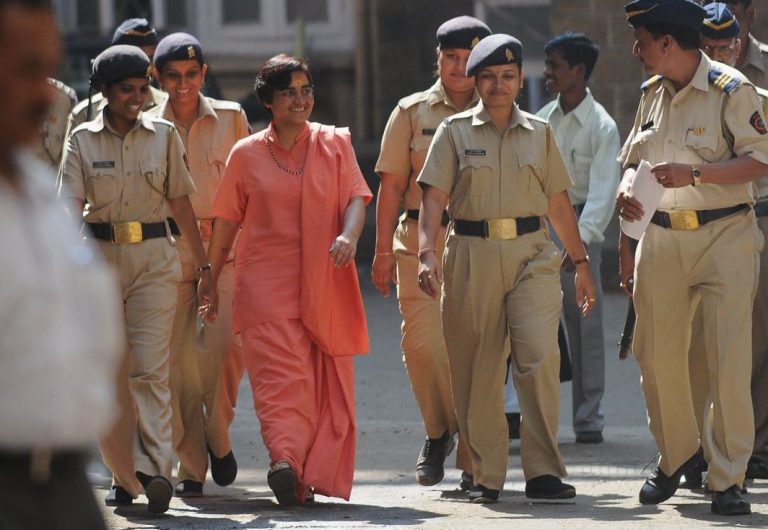 Changing the course of justice for political benefits is shocking and unethical. This was in ample evidence in two recent cases, as criminal charges were either changed or dropped—in the latter case, one of the accused happened to be the chief minister. In effect, the government of Uttar Pradesh was dropping a case filed against its own chief minister.

The first case was a special National Investigation Agency (NIA) court dropping all charges against Sadhvi Pragya Singh Thakur, Lt Col Prasad Purohit and six others in the 2008 Malegaon blast under the Maharashtra Control of Organised Crime Act, 1999 (MCOCA) and the Unlawful Activities (Prevention) Act (UAPA). Instead, they were charged only under Sections 120B, 302, 307, 304, 326, 427 and 153A of the IPC and Section 18 of UAPA, which are far less stringent than MCOCA which is punishable by up to life in prison.

In the incident, a bomb tied to a motorcycle exploded in Malegaon in Nashik on September 29, 2008, killing seven and injuring more than 100. The investigation found that Thakur’s motorcycle was used by the accused, Ramji Kalsangra, to store RDX. According to the Anti-Terrorist Squad (ATS) and other investigating agencies, Purohit is alleged to be the founder of a right-wing group, Abhinav Bharat, which aggressively crusaded for a separate “Hindu Rashtra”.

It remains to be seen what is left of the trial. Under MCOCA, statements given to police officers are admissible in court. But with MCOCA charges dropped, these statements will need to be recorded afresh in front of a magistrate.

Similarly, in UP, the government recently ordered the withdrawal of a 22-year-old case against the chief minister, Yogi Adityanath, and 12 others, including Union Minister of State for Finance Shiv Pratap Shukla and BJP MLA Sheetal Pandey, for holding a meeting in alleged violation of prohibitory orders. The case was filed at Gorakhpur’s Pipiganj police station on May 27, 1995.

What does Section 321 of the CrPC say about withdrawal from prosecution?

“The Public Prosecutor or Assistant Public Prosecutor in charge of a case may, with the consent of the Court, at any time before the judgment is pronounced, withdraw from the prosecution of any person either generally or in respect of any one or more of the offences for which he is tried; and, upon such withdrawal, –

a) if it is made before a charge has been framed, the accused shall be discharged in respect of such offence or offences;

b) if it is made after a charge has been framed, or when under this Code no charge is required, he shall be acquitted in respect of such offence or offences: Provided that where such offence—

This order came a day before the Uttar Pradesh Criminal Law (Composition of Offences and Abatement of Trials) (Amendment) Bill, 2017 was tabled in the assembly. Adityanath told the House that 20,000 “politically-motivated” cases were filed across the state over pro-test demonstrations. This amendment will end all these cases pending before magistrates.

According to media reports, the prosecuting officer in Gorakhpur received an order from the state government asking him to withdraw the case. However, the withdrawal application was rejected by the court.

Section 321 of the CrPC, 1973, which deals with withdrawal from prosecution (see box) says: “The Public Prosecutor or Assistant Public Prosecutor in charge of a case may, with the consent of the Court… withdraw from the prosecution of any person….” However, the UP government made the following amendment: “….in charge of a case may on the written permission of the State Government to that effect….”

According to a report by the Association for Democratic Reforms, out of 402 legislators in UP, 143 (36 percent) have criminal cases against them, showing the deep malaise pervading the political system in this state. And yet, the government instead of tackling it, has sided with the criminals.

Incidentally, according to Section 321 of the CrPC, 1973, a public prosecutor or an assistant public prosecutor can withdraw cases against a person only after obtaining written permission from the state government and getting an okay from the court. They have to be filed before the pronouncement of the judgment. There have been cases in the past where the public prosecutor has followed this rule.

This was also reiterated in State of Andhra Pradesh versus P. Anjaneyulu, (1984) and N. Natarajan versus B.K. Subba Rao (2003).

In Sheonandan Paswan versus State of Bihar, (1987), the apex court held that “while considering the application moved by the Public Prosecutor, the court has to see that the application is made in good faith in the interest of public policy and justice and not to thwart or stifle the process of law or suffers from such improprieties or illegalities as to cause manifest injustice if consent is given by the court.”

In S.K. Shukla versus State of U.P., (2006), the apex court ruled that “the Public Prosecutor cannot work like a post box or act on the dictates of the State Govt. He has to act objectively as he is also an officer of the court. The court has to assess freely whether a case is made out for withdrawal of prosecution or not. It is always open for the court to reject the prayer.”

In Mahmadhusen Abdulrahim Kalota Shaikh, (2009), the Court held that “Section 321 Cr.P.C. is a codified version of judicial review. It ensures that the judiciary makes the final decision by approving or disapproving the decision of Public Prosecutor.”

In Rahul Agarwal versus Rakesh Jain and anr, 2005, the Supreme Court held that “it may be permitted when valid reasons are made out for the same and it can be allowed only in the interest of justice. It shall be obligatory for the court to consider all relevant circumstances and find out whether the withdrawal of prosecution advances the cause of justice. Discretion under Section 321 should not be exercised to stifle the prosecution. Withdrawal can be permitted if the case is likely to end in an acquittal and the continuance of the case is only causing severe harassment to the accused or to bring out harmony between the parties.”

Despite this background, the manner in which the two cases have been brushed under the carpet is not a good sign for justice and the rule of law.