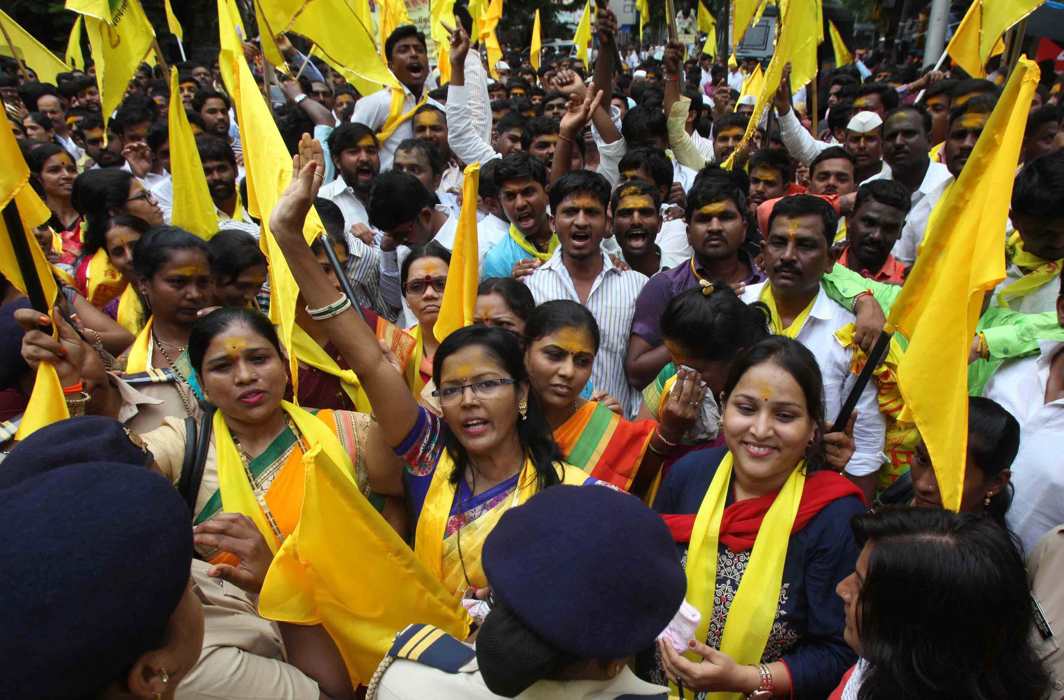 Above: Members of the Dhangar community demanding reservation from the Maharashtra government in Mumbai/Photo: UNI

An apex court order to sack those who forged caste certificates to secure employment has left the Maharashtra government in a dilemma as their numbers are nearly 11,700 and it could face a backlash

The figures are startling and have left the Maharashtra government with hard choices. Out of 63,600 employees recruited under the Scheduled Caste and Scheduled Tribes category by this government during the past four decades, 11,700 are reported to have forged their caste certificates to get employment. The state government is bound by a Supreme Court’s judgment last year to dismiss them from service, notwithstanding the number of years they have been in employment. However, the huge number of such employees means that it could face a backlash in the form of social and political unrest.

On July 6 last year, the Supreme Court bench comprising of the then chief justice, JS Khehar, and Justices NV Ramana and DY Chandrachud held in Chairman and Managing Director, Food Corporation of India and others v Jagdish Balaram Bahira and others that protecting the services of a candidate who is found not to belong to the community of tribe for whom the reservation is intended, substantially encroaches upon the legal rights of genuine members of those reserved communities. It said their just entitlements are negated by the grant of a seat to an ineligible person.

In such a situation where the rights of genuine members of reserved groups or communities are liable to be affected, government circulars or resolutions seeking to validate it cannot operate to their detriment, the bench held.

The judgment, authored by Justice Chandrachud, points out that service under the Union and States, or for that matter under the instrumentalities of the State, subserves a public purpose.  These services are instruments of governance. Where the State embarks upon public employment, it is under the mandate of Articles 14 and 16 and should follow the principle of equal opportunity, the bench held.

Elaborating further, the bench held that affirmative action in the Consti-tution is part of the quest for substantive equality. Available resources and opportunities provided in the form of public employment are in contemporary times short of demands and needs. Hence, the procedure for selection and the prescription of eligibility criteria have a significant public element in enabling the State to make a choice amongst competing claims, the bench reasoned.

The bench was categorical that the selection of ineligible persons, therefore, is a manifestation of a systemic failure and has a deleterious effect on good governance. It gave specific reasons for its conclusion. Firstly, if a person who is not eligible is selected, he gains access to scarce public resources. Secondly, the rights of eligible persons are violated as a person who is not eligible for the post is selected. Thirdly, an illegality is perpetrated by bestowing benefits upon an imposter undeservingly.

These effects upon good governance find a similar echo when a person who does not belong to a reserved category passes of as a member of that category and obtains admission to an educational institution. As a result, those for whom the Constitution has made special provisions are ousted when an imposter is selected under that quota, the bench suggested, calling this a fraud on the Constitution.

Such a consequence must be avoided and stringent steps taken by the Court to ensure that unjust claims of imposters are not protected in the exercise of the jurisdiction under Article 142 of the Constitution, the Supreme Court held.

The bench added: “The nation cannot live on a lie. Courts play a vital institutional role in preserving the rule of law. The judicial process should not be allowed to be utilised to protect the unscrupulous and to preserve the benefits which have accrued to an imposter on the specious plea of equity.”

Article 142 of the Constitution enables the apex court to use its extraordinary powers to ensure complete justice in a given case, even if the legal provisions do not allow a remedy suitable in the facts of a given case. The bench, however, was clear that once the legislature has stepped in by enacting Maharashtra Act XXIII of 2001, the power under Article 142 should not be exercised to defeat legislative prescription.

The Bombay High Court had held in the case of Arun Sonone that mere in-validation of the caste claim by the Scrutiny Committee—which is authorised to determine the genuineness of the certificate submitted by a reserved category candidate—would not entail withdrawal of benefits or discharge from employment or cancellation of appointments made earlier.

The Supreme Court, however, found the High Court’s decision in Arun Sonone unsustainable. Section 11 (1) (a) of the Maharashtra Scheduled Castes, Scheduled Tribes, De-Notified Tribes (Vimukta Jatis), Nomadic Tribes, Other Backward Classes and Special Backward Category (Regulation of Issuance and Verification of) Caste Certificate Act, 2001 explains the offence as obtaining a false caste certificate (by furnishing false information), filing a false statement or document or by any fraudulent means. Under Section 11(1)(b), the offence consists in securing a benefit exclusively reserved for designated castes, tribes or classes by a person who does not belong to that category in terms of appointment, admission in an educational institution against a reserved seat or election to a local authority or cooperative society against an office which is reserved for that category. Offences punishable under Section 11 have been made cognizable and non-bailable under Section 12.

The apex court held in the FCI case that Section 11(1) must be read and construed in a prospective sense, and having regard to the guarantee contained in Article 20(1) of the Constitution. But the Court made it clear that the formal termination of an employment or the withdrawal of admission is a necessary consequence which flows out of the invalidation of the caste or tribe claim. The only exception to this principle consists of those cases where, in exercise of the power conferred by Article 142, the Court considered it appropriate and proper to protect the admission which was granted or, as the case  may be, the appointment to the post.

Interestingly, Section 7 of the Maharashtra Act of 2001 enables the Scrutiny Committee to verify a caste certificate whether issued before or after the commencement of the Act, and if it concludes that it is false and is obtained fraudulently, it is empowered to order its cancellation and confiscation. Section 10 provides for the withdrawal of benefits secured under a false certificate. The apex court was categorical that such withdrawal of benefits cannot be op-posed on the ground that there was absence of dishonest intent.

In the FCI case, the Scrutiny Committee invalidated the ST certificate granted to the respondent on the ground that his belonging to the Mahadeo Koli Scheduled Tribe, as claimed by him, was not established.  Although he was appointed in 1984, his services were terminated in 2013.

The Bombay High Court accepted his contention that he was entitled to protection of services with continuity, while the management would be at liberty to withdraw such benefits as were granted after September 28, 2000. During the pendency of the management’s SLP in the Supreme Court, the respondent was reinstated and was granted further promotions. Eventually, he retired in August 2015 with his terminal benefits.

The Supreme Court, therefore, held that no further benefits of any nature whatsoever would be admissible to the respondent on the basis of his claim, which has been invalidated. “However, in the peculiar facts, we are not inclined to order recovery (of benefits granted to him) has to be made from the respondent,” the Court said. Thus, wherever the employee is found to have obtained a caste certificate fraudulently, and is still in ser­vice, he will not be able to protect his employment.

The Maharashtra government, it appears, has no option, but to comply with the Supreme Court’s judgment which seeks to correct an “egregious constitutional fraud”.

The apex court’s decision is based on a fine balance of the letter of law with a sense of compassion, while reflecting a profound awareness of the human element involved. Leaning in favour of the employees who played fraud on the Constitution would mean serious injustice to the classes of people for whom reservations were originally envisaged.