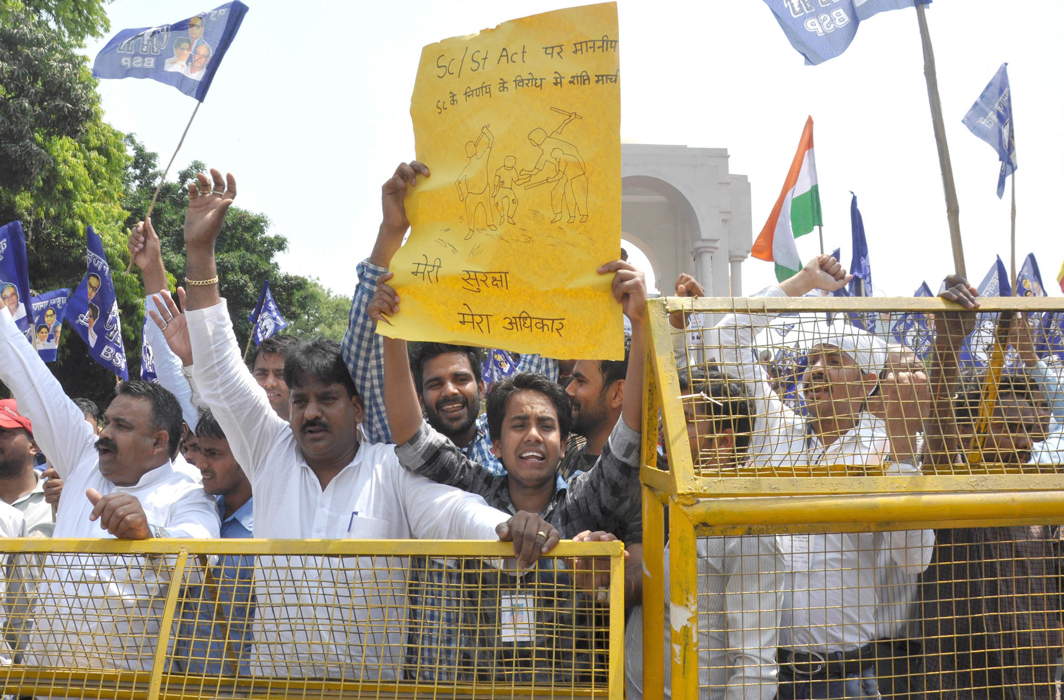 Above: Dalit organisations agitating for their rights. The SC verdict on caste status vis-a-vis states is another discerning pronouncement/Photo: UNI

While a Supreme Court judgment has clarified that SC/STs in a state cannot claim the same rights in other states, it has also opened a can of worms

The exigencies of vote banks and an ostensible commitment to the Constitution have combined to produce such gems as “consequential seniority” and “concept of catch up”. Article 16 of the Constitution, which deals with equality, has been amended to suit each dispensation and there is no dearth of cases based purely on reservation every year in the apex court.

The latest one is regarding a five-judge Constitution bench pronouncement by Justices Ranjan Gogoi, NV Ramana, R Bhanumathi, MM Shantanagoudar and S Abdul Nazeer. Though there have been several orders, circulars and precedents, the Court had to clarify that a particular community notified as Scheduled Caste (SC) or Scheduled Tribe (ST) in relation to a state cannot claim the same rights in other states, otherwise the concept would become “nugatory”. “Unhesitatingly, therefore, it can be said that a person belonging to a scheduled caste in one state cannot be deemed to be a scheduled caste person in relation to any other state to which he migrates for the purpose of employment or education,” the Court said.

The matter had come to the apex court bench after a referral from the Delhi High Court. While dealing with the issue of reservation in subordinate services, it had referred the matter to the Supreme Court (SC) for authoritative adjudication under Article 134A of the Constitution.

The bench stated very clearly that states should not in­dulge in revising caste lists or touch upon the issue related to Articles 341 and 342 without referring the same to the centre. The judges opined that it is Parliament alone which has been vested with the power to act on this. Thus, SCs and STs specified in relation to a state or a Union Territory (UT) do not carry the same status in another state or UT. Any expansion or deletion of the list by any authority except Parlia­ment would be against the constitutional mandate.

The bench also cautioned that “unilateral action by states on the touchstone of Article 16(4) of the Cons­ti­tution could be a possible trigger point of constitutional anarchy and, therefore, must be held to be impermissible under the Constitution”.

The government through its Depart­ment of Personnel had specified many times in the past that SCs/STs will not lose their status in their state of origin and will be entitled to reservation benefits there, but not in the state to which they have migrated if their caste is not notified there. The bench in its wisdom decided that only Delhi could be left out of this migration restriction.

Upholding the “pan-India reservation” rule for Delhi as constitutional, the bench relied on the centre’s submission that “members of the Delhi Adminis­trative Subordinate Services are the feeder cadre for Central Civil Services Group B (DANICS). While this may stand for now, it may invite more petitions against it at some future date as Justice Bhanumathi’s disagreement might indicate.

These have come up in the past too. In February 2017, a two-judge bench had declared a Kar­nataka Act granting “consequential promotions” to SC/ST groups as ultra vires the Constitution. The BK Pavitra vs State of Karnataka 2017 case had been a sort of follow-up to the 2002 case of M Nagaraj on the same issue, but the judgment came only after 15 years. The result was that all 64 departments of the state government had to revise their seni­o­rity lists.

A similar exercise had been undertaken by Madhya Pradesh sometime in 2011 when the out-of-turn promotions granted by the Digvijaya Singh government in 2002 under its Dalit agenda policy had to be junked.

The crucial questions then are:

Senior advocate Sriniwas Raghavan told India Legal: “On the face of it, the answers may be simple. The Atrocities Act benefit is not available to people listed in other states. Some states already have a son of the soil policy for educational institutions and people already in jobs cannot be asked to leave without express direction from the court.” He cautions that these are serious issues and need greater study and sympathetic interpretation.

The ongoing countrywide agitation for and against the Supreme Court judgment on the Atrocities Act which repor­tedly “diluted” its provisions had to be tackled through a Parliamentary Act. But it has hardly poured water over the embers.

An upper caste association of employees in MP, for instance, calling itself SAPAKS, has taken up the issue in a big way in the election run-up. Chief Minister Shivraj Singh Chouhan has already been pelted with stones and chappals by supporters of the anti-Dalit movement. The RSS is reportedly not very sympathetic towards the reservation policy though electoral exigencies have made its chief, Mohan Bhagwat, withdraw his statements in the past. At present, the government and the BJP president have been desperately trying to sound pro-reservation.

Article 16 allows states to protect the rights of groups which it considers need state protection and are especially in need of encouragement through reservation. Several southern states and MP, in particular, have taken this forward to delve into promotions and deter­mina­tion of seniority in services. The latest verdict by the SC should be cautionary as well as a deterrent.