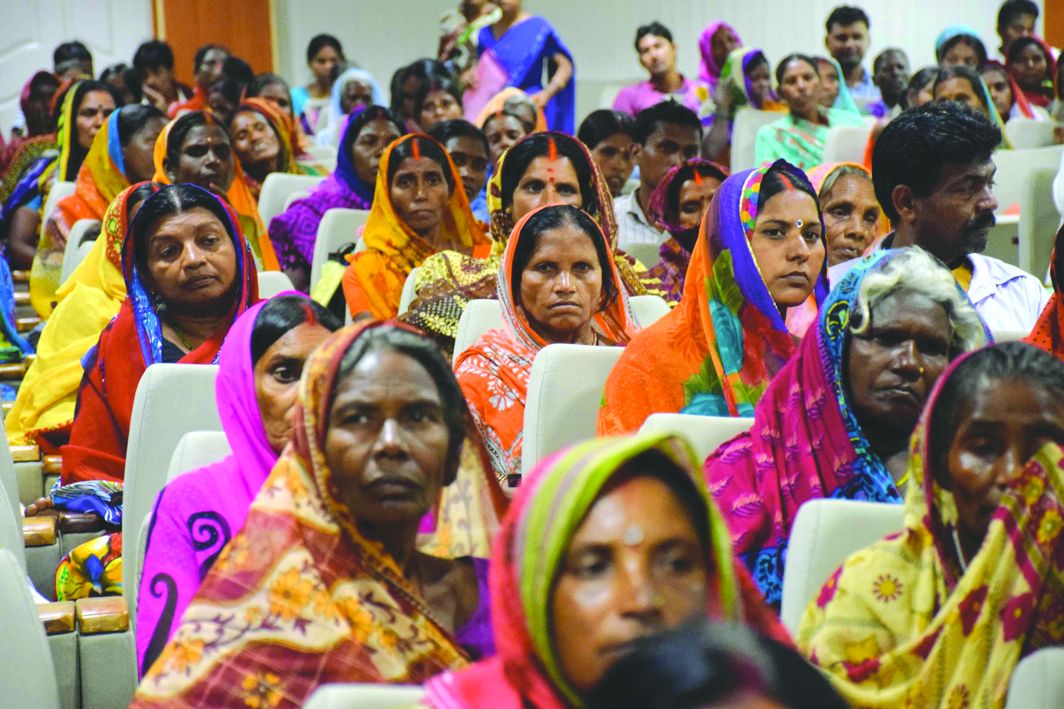 Above: A Mahila Mandal in progress in Durgaganj, Uttar Pradesh. Photo: UNI

Poor women and widows are often at the mercy of small and micro-loan recovery agents, but the law has an in-built safeguard for them against further grief

There are an increasing number of complaints of women purportedly exploiting laws framed for their benefit even amid a growing awareness in society about their rights. In this scenario, an interesting case came up in the Delhi High Court last month which questioned the constitutionality of Section 56 of the Civil Procedure Code, 1908 (CPC). Section 56 states that “the court shall not order the arrest or detention in the civil prison of a woman in execution of a decree for the payment of money”.

In the present case, Anil Kumar, who operates a non-banking finance company (NBFC), has filed the writ petition wherein he claims that banks and NBFCs are suffering huge financial losses due to frauds committed by people who took loans with mala fide intention and later took advantage of this section. “Women are taking undue advantage of this section as they are well aware that they are protected under it and no recovery of money could be effected without the fear of arrest and detention,” it said.

The petition argues that this Section is ultra vires of Articles 14, 15, 19(g) and 21 of the constitution. Following the hearing on January 8, the division bench of Acting Chief Justice Gita Mittal and Justice C Hari Shankar issued a notice to the Ministry of Law and Justice and the Law Commission, seeking their responses.

However, Kumar’s claims are not borne out by facts from the microfinance and mainstream banking sectors. Numerous studies and data analyses have shown that women are, in fact, a safer bet when it comes to lending and are more conscientious borrowers.

Activist and National Sarda Equal Opportunities Awardee Subhash Mendhapurkar, who heads SUTRA (Society for Social Uplift Through Rural Action), a Government of India-registered organisation working with microfinance institutions (MFIs) and self-help groups (SHGs), told India Legal: “Women borrowers are far more creditworthy than men. That is the beauty of microfinance. It is successful because it is women-only. When they take loans, women will invest the money in poultry, dairy farming, their children’s education, house repairs, agriculture, etc., to improve the quality of life for their family. In the case of men, it is not so. It has been seen that when the money is not used for the family and economic activity, the propensity towards repaying the loan is far lower.”

Then again, what has largely been ignored in this equation is the quantum of individual loans and the economic and social class of the borrowers.  The av­erage quantum of loan is a paltry Rs 5,000. Only in rare cases, does this sum touch a ceiling of Rs 1 lakh. But the rate of interest charged is quite high and ranges bet­ween 24 percent and 36 percent. It far exceeds the rates charged by banks.

All India Democratic Women’s Asso­ciation (AIDWA) national secretary Tapasi Praharaj says this is one of the main drawbacks of the microfinance system. This system works like a chain with each link adding its own margin, jacking up the final rate of interest to be paid by the borrower. One of the chief demands of AIDWA has been lowering it to a more rational value. “Linkage loans typically require three to four years for approval, thereby reducing the risk factor for banks vis-à-vis non-payment,” says Praharaj.

Also and importantly, larger loan amounts are sanctioned only after the credibility of the borrower has been established through a repeated cycle of loan-taking and repayments, a practice which acts as an in-built and effective safeguard against default.

In India, micro-finance began with non-governmental initiatives in the late 1980s when the first self-help group (SHG) was formed by Mysore Resettlement and Development Agency (MYRADA). In 1986, MYRADA approached the National Bank for Agriculture and Rural Development (NABARD) for grants to their SHGs. NABARD launched the bank-SHG linkage programme in 1992.

Two major policy changes that have given further boost to micro-finance in the next decade were the setting up of the Swarna Jayanti Gram Swarozgar Yojana and the inclusion of credit to SHGs and microfinance institutions (MFIs) as part of the priority sector credit for banks.

This Yojana was recast as the National Rural Livelihood Mission (NRLM) in 2011 and launched with a budget of $5.1 billion. It is one of the flagship programmes of the ministry of rural development. Also known as the Deen Dayal Antyodaya Yojana, it is one of the world’s largest poverty alleviation initiatives and is supported by the World Bank with a credit of $1 billion. Union Budget 2018 increased the allocation for NRLM by Rs 1,250 crore from Rs 4,500 crore to Rs 5,750 crore.

Like men, women have to show solvency to get loans. But it is harder for them as most do not have an individual income. Neither do they have property or land to offer as collateral. Only a minuscule percentage of women own land in India, and that’s why 99 percent of loans are given to men. For most illiterate and poverty-stricken women, SHGs are the only way to secure loans, and these groups themselves weed out insolvent members. 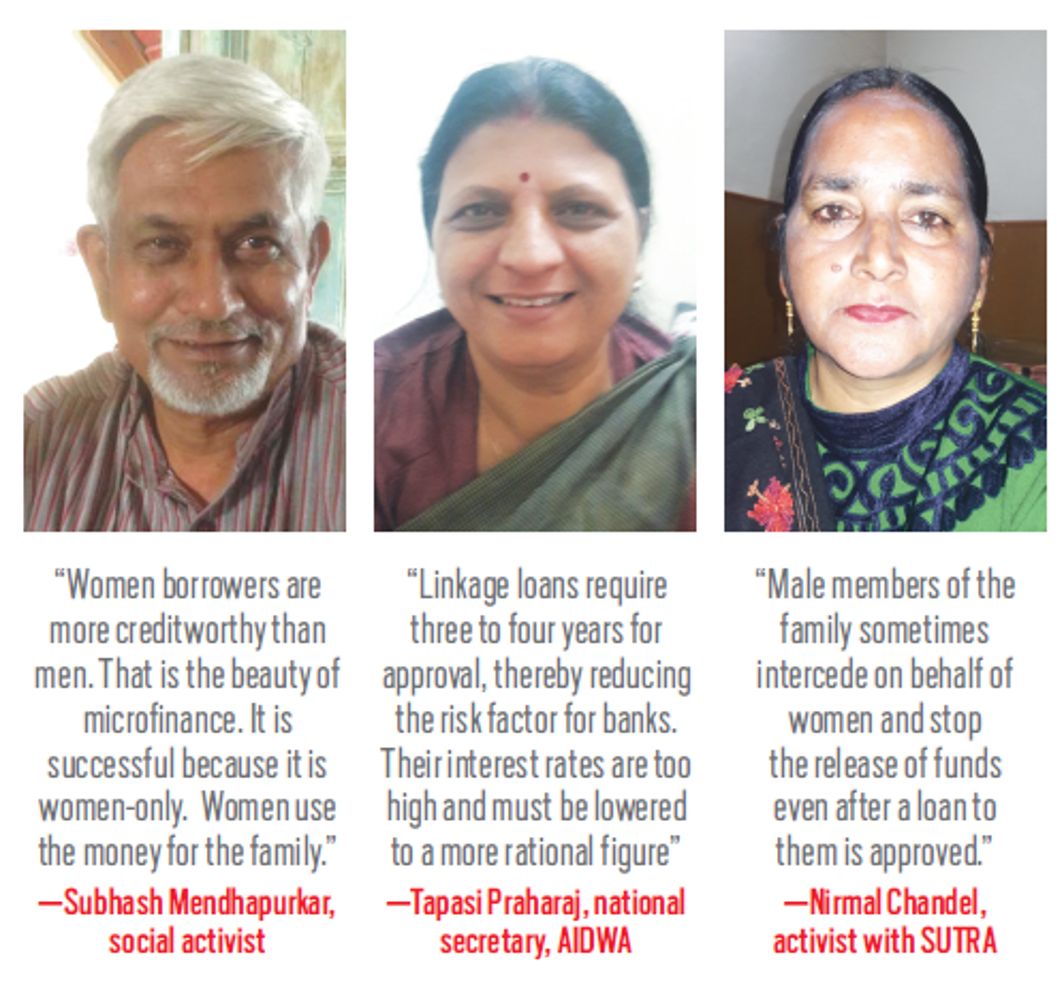 Widows as well as women whose husbands have taken loans and later failed to return them have it particularly bad. Many have not even been co-signatories for these loans and yet, they are forced to bear the brunt of loan sharks. Without any law to protect them except Section 56 which shields them from the indignity of arrest and police harassment, these women are nonetheless routinely persecuted and their property and possessions taken away by banks and moneylenders. Meanwhile, they are denied fresh loans by SHGs and banks.

Says Praharaj, “As there is no other protection or recourse for these women, they have no choice but to approach private moneylenders if they don’t have land to give in lieu of the loan their husbands took or any other collateral. These new loans are then given at exorbitant interest rates. It traps them in a vicious circle that ends in destitution.”

Take the example of one Kalavati from Matkanda village in Ghadsi in Solan district of Himachal Pradesh. Her husband, Chet Ram, had taken a loan of Rs 11,000 way back in 1987 under the Zilla Udyog Vikas Scheme and failed to repay it. Because of this, she was denied a loan by the SHG and had to approach a local sahukar. She ended up losing her cow and buffalo. Soon, her kids dropped out of school. Till date, she has not been able to repay him and is barely able to support herself and her children.

Even when a loan is sanctioned to a widow, she may not end up with the money in her hands.

As Nirmal, an activist with SUTRA, tells India Legal: “The male members of the family sometimes intercede on their behalf and stop the release of money. One such case took place in Bilaspur district of Himachal Pradesh where the father-in-law returned a loan taken by a young widow to build a small home for herself and her children on a small plot of land that had been left to her by her own husband.”

Collection agents of banks and MFIs are equally culpable in this exploitation. Very often, they use abusive language against defaulting borrowers, including asking them to prostitute themselves to pay them.

In Guntur, Andhra Pradesh, 27-year-old Borugadda Sudha jumped into a well after being unable to return Rs 15,000 taken from an MFI in 2009. Her husband, Ganapathi Rao, had died in a foundry accident six months earlier. In Narsipatnam, also in Andhra Pradesh, agents of a micro-finance company allegedly abducted a 10-year-old girl in 2010 after her mother failed to repay a loan. Around the same time, in Cuttack, Odisha, Sanjukta Mohanty, who took a Rs 12,000-loan from an MFI, was unable to pay her instalments after her husband deserted her. Inexplicably, she went missing and remains untraced till date. Her house was auctioned three months later and the MFI took the money.

The Reserve Bank of India guidelines dated 2007 have recommended a due diligence procedure for engagement of recovery agents so that they do not use muscle power and are trained in soft collection techniques—regular reminders, proper documentation of the process and loan restructuring—but implementation remains a grey area.

At the receiving end

This is not the first legal challenge to Section 56.

In October 2016, the Bombay High Court dismissed a PIL containing the same plea. The bench of Chief Justice Manjula A Chellur and Justice MS Sonak stated in the judgment: “Keeping in view the prevailing customs, the legislature has considered it appropriate to grant women a special protection… the legislative object is basically to grant a limited protection. For this limited purpose, Article 15(3) [the right to equality] protects this provision.”

The defaulter may still face punishment under Sections 403 or 420 of the IPC for dishonest misappropriation of funds and cheating. Section 25 in The Recovery of Debts Due to Banks and Financial Institutions Act, 1993, stipulates arrest as one of the methods of dealing with a defaulter, even though banks do not usually take this route and go for debt rescheduling and loan restructuring instead.

If the court thinks the default is more civil in nature, CPC is set into motion. If the wrongdoing is deemed criminal, then it no longer applies. However, the court may still use its discretion to grant bail to a woman offender as per Section 437 of the Criminal Procedure Code.

Sometimes, dispensation of justice requires a small measure of affirmative action and a helping hand.