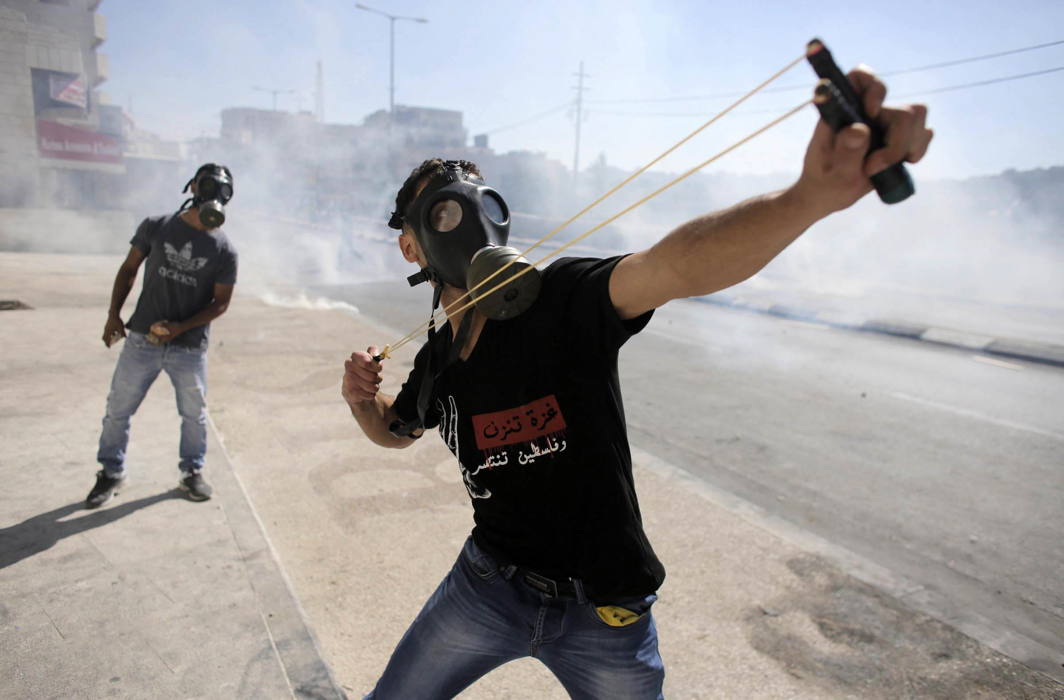 Above: A Palestinian protester in the West Bank town of Bethlehem uses a slingshot to throw a stone at Israeli troops/Photo: UNIterrorist

Though India has seen increasing incidents of stone-pelting, it has no specific law to deal with them like other countries

~By Vinay Vats and Ishita Agarwal

Stone-pelting has been a common sight and form of resistance in the Gaza Strip as angry and frustrated Palestinians take on Israeli soldiers armed to the hilt. Who hasn’t seen pictures of young boys, concentration writ large on their innocent faces, as they hurl these “missiles” at the unmoved soldiers. The same sort of resistance has spurted in various parts of India too—Kashmir, Tuticorin, Shillong….

While some call these stone-pelters terrorists, human rights activists say they are fighting for their rights. In the hurry to label them, many don’t understand the underlying reasons for this form of non-lethal aggression from common people, many of them children who are arrested under charges of arson and rioting.

Even army chief General Bipin Rawat recently said that when people are throwing stones and petrol bombs at army personnel, he cannot tell his men to “just wait and die”. “People are throwing stones at us, people are throwing petrol bombs at us. If my men ask me what do we do, should I say, just wait and die? I will come with a nice coffin with a national flag and I will send your bodies home with honour. Is it what I am supposed to tell them? I have to maintain the morale of my troops who are operating there,” Gen Rawat said.

He added that his force would find it easier to quell protests if instead of stones, weapons were used. “In fact, I wish these people, instead of throwing stones at us, were firing weapons at us. Then I would have been happy. Then I could do what I (want to do),” he said.

In fact, over the last three years, there were 4,799 stone-pelting incidents  in J&K alone—730 in 2015, 2,808 in 2016 and 1,261 in 2017. After the decline of militancy in the Valley, people chose stones as their weapons to fight the state. While the solution to the vexed problem of self-determination is nowhere in sight, the resources of the army are being wasted to fight its own people rather than terrorists.

Nonetheless, in February, the PDP-BJP government had decided to withdraw FIRs against nearly 10,000 people booked for stone-pelting. Even Union home minister Rajnath Singh had said that cases against first-time stone-pelters were withdrawn as “children make mistakes” and their future shouldn’t be put in jeopardy. But this issue so irked BJP MP DP Vats that he said that instead of cases being withdrawn against stone-pelters in Kashmir, they “should be shot dead”. He reportedly said: “I read about the withdrawal of cases against stone-pelters but I think those pelting stones should be shot dead.”

Despite this issue generating such passion, India has no law on stone-pelting. This has created a rift between ordinary people who know of no other means of aggression but this, and soldiers who bear the brunt of these attacks. While the army has innovative ways to stop stop-pelters by using pellet guns, in extreme cases of provocation, soldiers have also used people as human shields to protect themselves. This was seen on April 9, 2017, when Major Litul Gogoi tied up a civilian, Farooq Ahmed Dar, on the bonnet of his vehicle during by-elections to escape stone-throwers. For this act, he was issued a commendation card by General Bipin Rawat.

However, J&K is a different case from the rest of India and is not governed by the Indian Penal Code (IPC) by virtue of Article 370 of the Constitution. It has its own penal code called “Ranbir Penal Code” which is almost a replica of the IPC.

Although stone-pelting may seem like a minor offence, it is treated seriously by many countries. In Israel, the minimum sentence for throwing stones on Israeli troops, civilians or vehicles is three years. Further, people caught pelting stones can be jailed up to 20 years if the intention to cause harm is proved.

In the US, stone-throwing is considered a felony, punished with long sentences. In some cases, stone-pelters can be sentenced to life. They face criminal charges depending on the gravity of the crime—hurt, grievous hurt, second degree murder, criminal possession of weapon or aggravated assault with a lethal weapon. In one instance, a Florida court sentenced a teenager to life for throwing a rock on a car.

Stone-pelters in Mexico frequently throw stones on US border patrol agents. Between 2010 to 2014, these agents were assaulted with rocks 1,700 times. In return, the agents fired their weapons 43 times, resulting in 10 deaths. Now they are allowed to use lethal weapons on rock-throwers.

The Australian legal system even has a particular provision dealing with stone-pelting and rock-throwing.  Section 49A of the Crimes Act deals specifically with the offence of “throwing rocks and other objects at vehicles and vessels”. It states that a person can be charged with an offence if he deliberately throws any object towards a vehicle or vessel that is on a road, railway tracks or water. If a person is found guilty under this section, then he can be imprisoned for a term extending to five years.

In New Zealand, a person could serve 14 years in jail for throwing rocks. A court sentenced a teenager to two weeks in an eye-injury ward of a hospital with a bandage on his eyes so that he could understand the consequences of his act. He had thrown a stone at the window of a passing train which resulted in an eye injury to a passenger.

In the UK, under Section 8(B) of Public Order Act 1986, a person involved in stone-pelting can be sentenced from three to five years in prison.

It is therefore imperative that India too has clear laws to deal with stone-pelters so that there is no ambiguity left on how to deal with them.