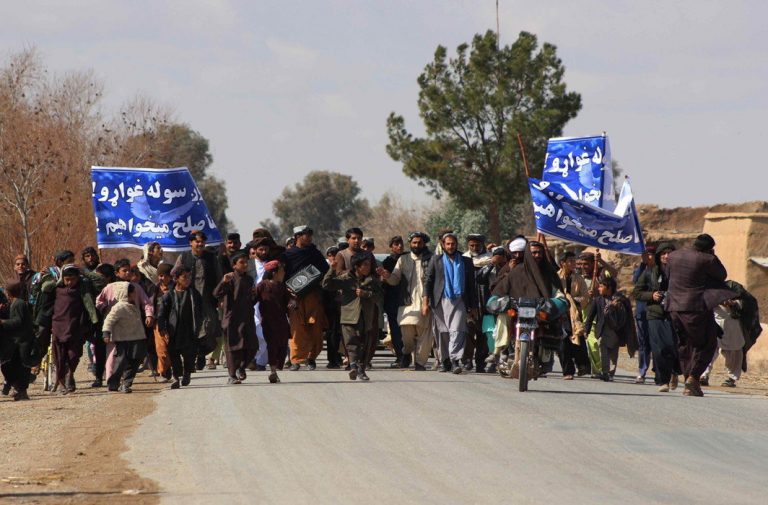 Above: People in Afghanistan urging the Taliban to give up their fight and enter into a dialogue with the government to end war crimes/Photo: UNI

The International Criminal Court’s recent rejection of its chief prosecutor’s request to investigate alleged war crimes and crimes against humanity in Afghanistan has laid bare the limitations of its working. The statement of the Court that the current situation in Afghanistan “made the prospects for a successful investigation and prosecution extremely limited” has shocked civil society.

For the victims of the war in Afghanistan, it means justice will continue to be elusive. For big powers, particularly the five UN Security Council (UNSC) members with veto powers, it means they can continue to wield the big stick against other nations. For civil society, there seems to be no end to the struggle for global accountability of nations through the ICC.

The ICC began functioning on July 1, 2002, when the Rome Statute came into force. This Statute is a multilateral treaty and serves as the ICC’s foundational and governing document. It provides three options for initiating action: a State Party to the Statute, the UNSC and the ICC prosecutor’s own initiative. During the run-up to the Rome conference, India had strongly resisted the privileged position given to the UNSC.

The ICC tries only individuals and not states; this makes its job more difficult and pointed. In this respect, it differs from the International Court of Justice (ICJ) and the UN Human Rights Council (UNHRC). The ICC has the jurisdiction to prosecute individuals for international crimes of genocide, crimes against humanity, war crimes and crimes of aggression. The Court is intended to complement existing national judicial systems. So the ICC can exercise its jurisdiction only when national courts are not prosecuting or when the UNSC or individual state refers the matter to the Court.

The ICC will probably review the whole Afghan exercise because the office of the prosecutor had invested a lot of energy and resources on collecting information for its case for over a decade before the pre-trial process started in 2017. Otherwise, the ICC’s rejection could discourage such initiatives by its prosecutor in future. The ICC is also likely to make procedural and structural improvements to make the process more resilient.

There was every justification for the ICC to take up investigation of alleged war crimes in Afghanistan—the mother of all wars in recent times—going on since 2001. According to August 2016 estimates published by the Watson Institute for International and Public Affairs at Brown University, US, 15 years of war cost over 1,11,000 Afghan lives, including 31,000 civilians, soldiers and militants, while leaving 29,000 civilians wounded.  Since then, the gory tale has continued in 2018; in October 2018 alone, 273 civilians were killed and 550 injured in various incidents.

The prosecutor had submitted over 20,000 pages of information to the ICC pre-trial panel in 2017 in support of her request, in spite of lack of cooperation from the US, Afghan authorities and the Taliban. Fatou Bensouda, the ICC’s chief prosecutor, said that the Taliban and other armed groups have carried out “a widespread and systemic attack on civilians perceived as supporting the Afghan government and foreign entities”. The ICC report blamed the Taliban and other anti-government armed groups for “more than 17,000 civilian deaths in the period between January 2007 and December 2015”.

The report said it had “basis to believe that, since May 2003, members of the US armed forces and the CIA have committed the war crimes of torture and cruel treatment, outrages upon personal dignity, and rape and other forms of sexual violence pursuant to a policy approved by US authorities. The US armed forces subjected at least 61 detainees to torture, cruelty, outrages upon personal dignity in Afghan territory between May 2003 and December 2014”. The report also added that CIA members probably carried out similar acts against at least 37 detained persons “on the territory of Afghanistan and other State Parties to the Statute (namely Poland, Romania and Lithuania) between December 2002 and March 2008”. The prosecutor’s office was spurred to investigate because the US was not seen mounting “national investing or prosecutions” despite “unprecedented details of the interrogation”.

Amnesty International (AI) called the ICC’s decision a “shocking abandonment of the victims which will weaken the court’s already questionable credibility”. Brij Patnaik, South Asia Director of the organisation, added: “None of the reasons given by the ICC judges justifies this decision. The gravest crimes can only ever be investigated in trying circumstances. If anything, the court’s reluctance to proceed with investigations in the face of such constraints only reveals its overreach and signals its weak resolve.” The AI statement further added that the ICC decision will be seen as “a craven capitulation to Washington’s bullying and threats”. The Court has a moral and legal duty to reach out to the victims of crimes in Afghanistan and explain this decision.

Human Rights Watch’s Param-Preet Singh in a statement said the ICC judges’ decision “sends a dangerous message to perpetrators that they can put themselves beyond the reach of the law just by being uncooperative”. An Associated Press report quoted Sima Samar, the chair of Afghanistan’s Independent Human Rights Commission, as saying that “with this decision, people will lose hope of getting justice and they might take revenge, fuelling conflict in the country”.

All along, the US has been against the ICC prosecutor’s investigation in Afghanistan because it is opposed to subjecting US forces serving overseas to international investigation. In 2002, the year the ICC came into being, the US Congress approved the American Service-Members Protection Act to set a legal framework to deny support to the ICC’s investigations. The law authorises the US president “to use all means necessary” to free Americans held by the tribunal.

President Donald Trump was irrepressible in his comments on the ICC’s decision. He said it was a victory “not only for these patriots, but for the rule of law”. Explaining the strong reservations of the US, he called the ICC “illegitimate” and said it would be met with a “swift and vigorous response” if it tried to prosecute citizens of the US or its allies. The Washington Post described the US reaction as Trump administration officials “taking a victory lap”, hailing it as a vindication of their insistence that the Court has no jurisdiction over US forces allegedly implicated in a probe.

Last month, Secretary of State Mike Pompeo, well known for his criticism of the ICC, announced that the US would deny visas to ICC staff who were found to be directly involved in any investigation into the US or allied personnel for alleged war crimes in Afghanistan. Two weeks ago, the State Department revoked the chief prosecutor’s visa, showing big power pressure tactics for stalling the ICC investigation.

The judges of the pre-trial chamber seem to have considered not only the interest of justice, but also the prospects of success as equally important in deciding the prosecutor’s request. Alex Whiting in his analytical article on the ICC decision in www.justsecurity.org, said the judges found strong evidence to indicate that for the moment at least, an investigation in Afghanistan simply could not succeed.

The judges noted that the prosecutor waited 11 years before even requesting an investigation largely because of difficulties in gaining cooperation for its preliminary assessments. Even Afghanistan, which is the affected nation, was not keen on the ICC initiating action.

At present, 124 states are party to the Rome Statute. As the ICC came in force on July 1, 2002, it has jurisdiction on crimes committed only after that date. India and three of the five veto-wielding UNSC members—China, Russia and the US—are among the states which have not ratified the Statute. As they are not party to the Statute, they are not obliged to hand over suspects. India has objected to the privileged position given to the UNSC to initiate ICC action and the unbalanced structure of the UNSC placing the five permanent members at an advantage. Secondly, the ICC actions impinge on the sovereignty of the state, particularly when India has its own vibrant judiciary and laws. It has human rights commissions to deal with rights abuses and a free press to bring offenders to justice without the ICC.

The ICC’s performance has not been impressive; this is not surprising given the difficult international environment in which it has to enlist cooperation from countries to prosecute individuals. It had been active mostly in Africa, causing resentment among African countries. It has 11 investigations open in 10 different countries (two in Central African Republic).

The prosecutor has opened investigations on her own authority in Kenya, Georgia and Burundi. In Kenya, cases against all six individuals have failed. In Georgia, formal investigation is going on for three years. Though investigation started in Burundi last year, it had left the ICC, nullifying the progress. The UNSC had referred the situations in Sudan and Libya to the ICC. After that, all the parties seem to have lost interest in the case.

The ICC has been a potted plant, subject to the pressures of realpolitik of big powers. Its improvement in performance is connected with the larger issue of UNSC reforms. It represents progress in accountability regarding international crime and has to be nurtured by nations to succeed. How they do it will determine its service to the global community.