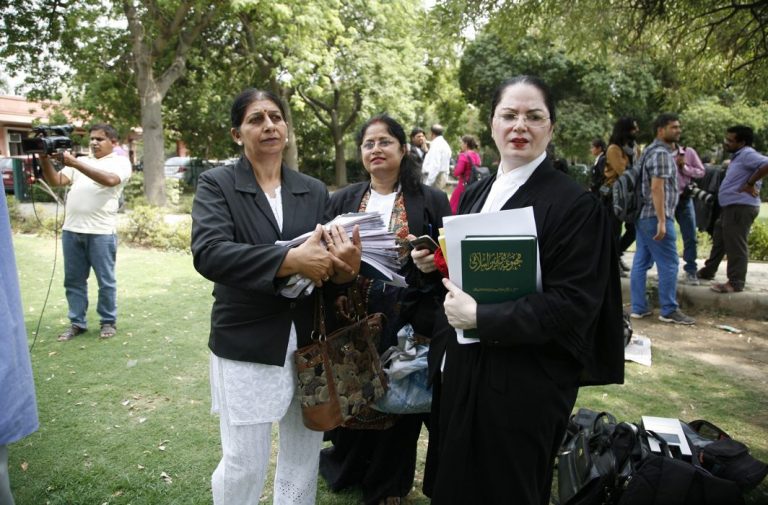 Above: Women advocates on the Supreme Court lawns/Photo: Anil Shakya

On the eve of Women’s Day, with Indian women surging ahead in all fields, the judiciary seems to have stayed a laggard. There are various reasons for the gender gap

In its nearly seven decades of illustrious history, the Supreme Court of India has seen a total of just six women judges. Another lady-judge-in-waiting, Indu Malhotra, is seemingly on her way to becoming the first woman advocate to get directly elevated to the post. That will make the total a paltry seven, one for each decade.

At this point, when the strength of the Supreme Court (after the retirement of Justice Amitava Roy on March 1) is just 24, the presence of R Banumathi as the only lady judge is an embarrassing statistic (4.17 percent).

And if one considers that 229 judges have been appointed to the top court since 1950, the number six, at 2.62 percent, is even more embarrassing. It took 39 years from its establishment for the top court to get its first woman judge in Justice Fathima Beevi (1989) and then, seven years later, Justice Sujata V Manohar was appointed.

The country has yet to see a female Chief Justice of India. Justice Ruma Pal was unlucky to miss out in 2000 when she was being sworn in for a six-year stint at the top court.  She and Justice YK Sabharwal were sworn in on the same day. However, the communication reached her late, hence her trip to Delhi was delayed. This meant she was sworn in a few hours after Justice Sabharwal. That delayed communication robbed Justice Pal of the opportunity to be the Chief Justice.

Indeed, as per a late-2017 study, the number of women judges across all courts—subordinate, high courts and the Supreme Court—is no more than 28 percent. This figure takes into account 17,160 judges in all courts put together. This number shrinks sharply if only the superior courts are considered.

In the 24 high courts of the country, as per data released on February 1, 2018, there were in all 77 lady judges in a total judge population (high courts) of 719. That gives a female representation of 10.86  percent.

This becomes pertinent on Women’s Day (March 8), when the message of inclusiveness goes out in all fields of work. While Indian women are surging ahead in all fields, the judicial system seems to have stayed a laggard.

The presence of women in the judicial system of India at large is not low. Droves of women join the legal profession each year, specifically because the profession promises an atmosphere of physical security and genteel behaviour. The number drops off sharply at a later stage because of two things, according to an expert. First, as per Indian tradition, they get married and quietly drop out of the bar. Also, many of them move into corporate positions—this is a growing trend, what with real estate firms needing a large number of lawyers experienced in civil and land related matters as well as banks needing similar employees to staff their loan sections. Those left are either born into law families or have had the opportunity of being under a good senior guide, said the expert.

The problem was dissected by Justice VS Sirpurkar, a former Supreme Court judge and a noted jurist, and his wife Kumkum (also a senior lawyer) during a discussion in an India Legal-APN (India Legal’s sister concern) television show recently. They harked back to the times when they had started practice, before returning to the present.

Kumkum described how she was discouraged by her fellow colleagues when she joined the bar in 1970, but she went on to become the president of the same bar. She also confirmed that many women who join the law profession do not take up litigation, hence are not seen in courts. That means that their numbers are small.

Justice Sirpurkar said the numbers were much better at present and re­called a function in Latur district court where the number of lady judges was more than the male judges. However, the patriarchal mindset in the system often comes in the way of women moving ahead, he said. He recalled one incident in which his fellow judges (male) were upset with him for recommending the names of two women judges to be elevated to the high court. “The patriarchal system still prevails,” he said. “And that’s why wherever I speak, I say that more than the ladies, it is the men who should be educated (in this respect).”

Going through the numbers (as available from the latest data released) of the different high courts of India, one sees a trend. The largest number of female judges (11) is with the Bombay and Madras High Courts, with Delhi being close behind with 10. Calcutta, which espouses general open-mindedness as far as inclusiveness is concerned, however, fell lower than Punjab and Haryana’s eight, with just five women judges. And Allahabad, the largest high court of the country, with a total number of 105 judges, boasted only six women judges.

It was also surprising to see that even in Meghalaya, where matriarchy is the rule in society, there was not a single woman judge. That high court has a total of two judges. Northern and north-eastern states did not show much inclusiveness. Chhattisgarh, Himachal Pradesh, Jammu and Kashmir, Manipur, Tripura and Uttarakhand all had zero female representation on the bench. Sikkim had one, which is a third of the total strength of its bench.

There has also been talk about the composition of benches at the top court. While the Nirbhaya gang-rape and murder case had Justice Banumathi on the bench, the triple talaq bench was deprived of representation from the distaff side. The Aadhaar case bench also has no female representation.

What has been extraordinary so far, however, was the sheer fearlessness that women judges have shown in the past.

Justice Pal, for example, was not only known to be a completely fearless judge, she also never baulked at speaking her mind, whatever the situation. She was one of the early voices for judicial accountability and never hesitated to criticise her own colleagues. She was a prominent member of a three-judge collegium that refused extension to a Madras high court judge who had corruption charges levelled against him.

In an off-court lecture she had criticised the higher judiciary for its “seven sins” which included arrogance, nepotism, and turning a blind eye to a colleague’s injudicious conduct.

Now, if this is any saving grace, the situation is hardly any better in the United Kingdom. According to a 2017 report, while women account for 61 percent of law graduates in that country, there are only 28 percent who land up in leadership positions, or as private practice partners. Numbers are rarely better in the judicial system, with England and Wales having the lowest percentages of female judges in Europe.

Change is happening in India, but the pace is slow. It is happening from within, as well as from without. As BR Ambedkar said: “I measure the progress of a community by the degree of progress which women have achieved.” That measure for society has to start within the legal system.