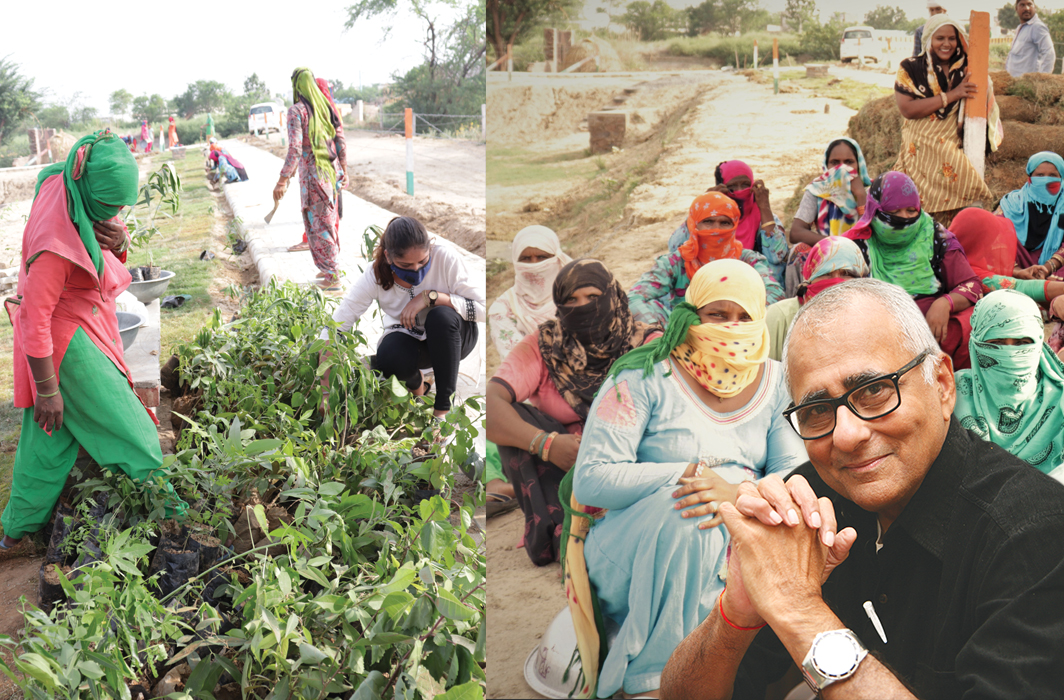 The Covid scourge has disrupted normal life-as-usual across the entire globe. It has made people socially disjointed and dysfunctional. But despite the social and economic and health havoc caused by the pandemic as it rages virtually unchallenged from horizon to horizon, there are pockets of resistance and rejuvenation that need to be cheered and emulated. And many of these activities are led by government functionaries whom we berate and disparage as “apparatchiks” and “babus”.

This is a short editorial, because most of what I am talking about here is better illustrated by the photographs that accompany this piece. This is a story—set in the midst of the corona surge—about an initiative in Gurugram, Haryana, undertaken under the oft-maligned MGNREGA programme, a welfare, employment scheme aimed at providing a certain fixed sum to unemployed rural folk in exchange for their labour on public works projects such as roads and the erection of dyke walls and water channels.

Gurugram, known as the Millennium City because of its infrastructure and business activities, has been struggling with a perennial water crisis. The geographical area of Gurugram district is about 1,258 square kilometres. With more than 77 percent of its area rural and under agriculture, with no rivers for irrigation, the district is reliant on canal water from the Western Yamuna Canal system for domestic use and groundwater for agricultural and commercial use.

Past initiatives undertaken by various government agencies such as pond rejuvenation, rainwater harvesting structures and plantation have often failed to yield appreciable results “because of lack of adequate R&D and a holistic strategy”, says Khatri.

The local administration conceived a novel strategy called GuruJal. It is an initiative to address the issues of water scarcity, groundwater depletion, flooding, and stagnation of water in Gurugram. The focus is to work on improving the compliances of schemes and policies supporting water conservation, following up on better enforcement of rules and regulations, mitigating water exploitation, combined with extensive campaigning to sensitise people and come up with better design solutions for water management.

It is a multifaceted outreach programme involving a variety of stakeholders including corporates, civil society and research organisations to address the issue using a systematic thinking approach. Says Khatri: “GuruJal’s initiatives towards water management and biodiversity enhancement are key to restoring the environment in the district. It is an ongoing process where  the district administration and young professionals of GuruJal serve the community using the tools of policy advocacy and field interventions. They act as agents of change in the lives of people in a more structured manner.”

So what were the solid achievements during the last five months of the Covid-19 epidemic? One project provides a representative snapshot. It is the story of the 2.5-acre Iqbalpur pond site and a small contingent of women. Out of 40 MGNREGA workers who worked on the beautification of the Iqbalpur pond site, 32 happened to be women. These women were empowered because they received an opportunity to work and earn their living with dignity during these harsh, economically and socially debilitating times. They have planted 400 saplings at the Iqbalpur site.

The District Water Management Team reported: “Along with their hard work and persistence our team was intrigued by their cautious way of working. They kept their faces covered with veils/dupattas all the time while working on the site where the temperature was above 40°C in the afternoon. Also, these women religiously followed social distancing during the plantation. The dedication of these ladies to beautify the pond (johad) that is considered an identity of the villages in Haryana was extremely appreciable.”

According to Shubhi Kesarwani, programme manager, Gurujal, who recently penned an evaluation of the project, the work included digging, cleaning, leakage fixing, awareness raising and bio-diversity management. The work also included rainwater harvesting and groundwater re­charging activities. She writes: “It is a matter of great satisfaction for the entire team that we achieved what we strived for. This report manifests the actions and results of the team GuruJal.”

India Legal magazine is in the process of planning a nationwide seminar on water management and the legal and legislative framework and parameters which need to be designed and implemented in order to make this a top-of-the-mind national priority. The GuruJal initiative will be an important milestone in the way forward, especially during these difficult times.