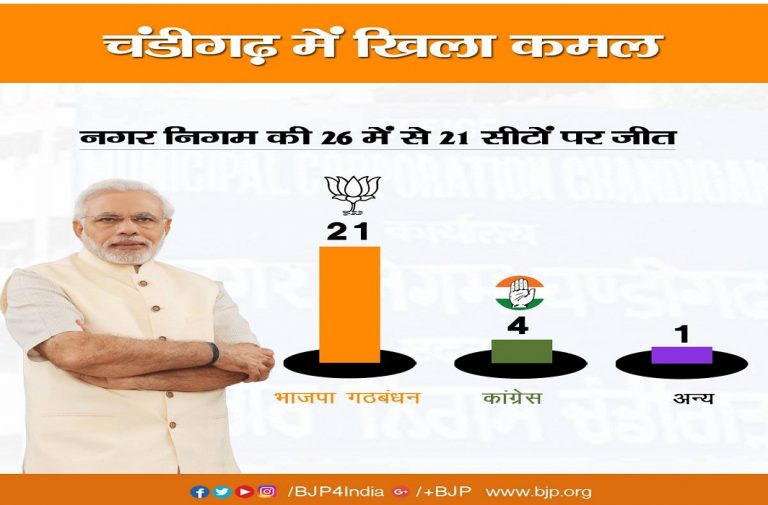 Was the Municipal Corporation victory an endorsement of demonetization as BJP claims?

The BJP, which registered an emphatic victory in the elections to the Chandigarh Municipal Corporation, would be reading too much into the results if it believes that it was a vote in support of demonetisation.

However, it certainly has indicators for the coming assembly elections in Punjab.

The Union Territory of Chandigarh, which also serves as the joint capital of Punjab and Haryana, has the distinction of having the highest per capita bank branches in the country. Besides, its residents have the highest per capita income among all states and Union Territories. The residents have not faced the brunt of problems caused by demonetisation also because a vast majority of them were already clued in to internet banking and plastic money.

Demonetisation was thus never a major issue in the Municipal Corporation elections even though the Congress did attempt in vain to raise the pitch on it. Subsequently, it also took the plea that the banks had pumped in cash in the UT on the eve of the elections to please the voters but the allegations remain unsubstantiated. The city residents did feel the pinch but apparently, local issues like cleanliness, provision of parking of vehicles, development of parks, supply of water and encroachments remained the dominant issues.

Yet, the election is an indicator for assembly elections in Punjab due in another two months. Elections to the Corporation are held a few months before the state elections and both houses have the same term. These also serve as a barometer of public mood and indicate the political preferences in Punjab.

During the December 2011 municipal elections, the Congress won 11 of the 26 seats, the BJP, 10 and its electoral ally, Shiromani Akali Dal (SAD), 2, while independents and others won the rest of the seats. And when the Punjab assembly elections were held in February 2012, it was a close contest in Punjab as the Congress lost by less than two percent votes.

In the recent elections, the BJP emerged as an undisputed winner, bagging 20 of the 22 seats it contested. SAD won just one of the four seats it contested. The Congress was reduced to merely four. However, unlike in Chandigarh, SAD is the dominant partner in the SAD-BJP alliance in Punjab. Therefore, its dismal performance in Chandigarh does not bring any cheer to the party. SAD, in fact, lost all its three seats to Congress candidates. In Punjab, SAD will contest 84 seats, while the junior partner, BJP, would be putting up its candidates from 23 constituencies. Akali leaders would certainly hope and pray for a better performance in Punjab.

Elections to the Corporation are held a few months before the state elections and both houses have the same term. These also serve as a barometer of public mood and indicate the political preferences in Punjab.

For that matter, even the Congress does not have much to cheer about in these municipal elections. The party won just four seats against its score of 11 last time. This indicates that the party continues to suffer from the fatal flaw of internal fights and disunity. This major factor had cost it the Punjab elections in 2012 by a margin of less than 2 percent votes. In the MC poll too, the faction-ridden party suffered due to internal bickering and the efforts of the leaders of various factions to pull down rivals.

The party does not appear to have learnt lessons and its Punjab unit is currently battling a fierce internal war. Even as rival parties have announced candidates for the Punjab elections, the Congress was the last one to release even its first list. It has announced names of just 61 of the 117 candidates. The rest of the list is held up and the threat of dissension looks real.