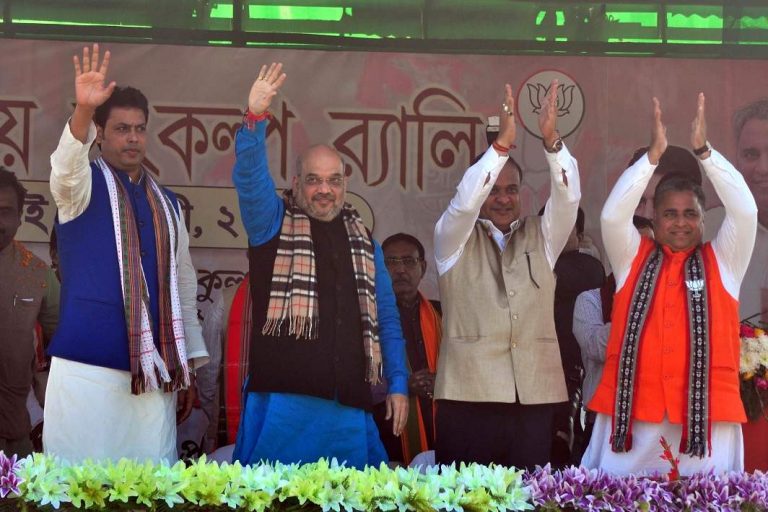 With polls due in three states in the region this month, the BJP is going all out to embrace them despite suspicion and anxiety among the Christian tribals

Having won Assam, the largest state in the North-east in 2016, and stolen the Manipur polls from under the nose of the Congress party, the BJP is now looking to make its mark in Tripura, Megha­laya and Nagaland. All three states have elections this month—Tripura on February 18, followed by Meghalaya and Nagaland on February 27.

Meghalaya and Nagaland are primarily Christian majority states and the ban on cow slaughter does not apply here. Yet, there is apprehension among the tribals there that the BJP being primarily a Hindu nationalist party, would, in time, try to change their eating habits. News of vigilante killings of Muslims and Dalits by gau rakshaks on suspicion of cow slaughter have raised fear and suspicion about the BJP, though there have been no incidents in the hill states. Reports of Hindutva supporters and their numerous sub-groups opposing the Church and attacking Christians are watched carefully in these tribal Christian states of the North-east.

Suklin Warjiri, who runs an orphanage outside Shillong, told India Legal: “The BJP cannot win more than a handful of seats in Meghalaya. A party that is bothered about what you eat and where you pray cannot be acceptable to the tribal ethos.” She points out that when Union tourism minister Alphons Kannanthanam offered generous funds for renovation of churches in Megha­laya, both Catholic and Protestant churches refused the money.

Despite suspicion and anxiety about the BJP among ordinary people of these two north-eastern states, the reality is that political leaders there understand the way the system works. Being hugely dependent on generous central financial assistance to run governments, politicians want to be on the right side of the party ruling at the centre. The BJP is today the party of governance, much like the Congress in the past. Small hill stat­es, with just 60-member legislative assemblies, always want to be aligned with the ruling party in Delhi. This is a major plus point for the BJP in both Meghalaya and Naga­land. Many MLAs who were formerly with the Congress have now switched sides since Narendra Modi’s thumping election victory in 2014.

The general view among north-eastern politicians is that the Congress is going nowhere in the near future. Things may have been different if the Congress had held its own and won some of the assembly elections after 2014. Perhaps then there may not have been the mass exodus of tribal politicians from the Congress to the BJP, be it in Manipur, Arunachal, Assam or Meghalaya. Though the inclination of Christian states has been to veer to the Congress, the grand old party has lost much of its old charm. On top of this, Prime Minister Modi himself continues to be popular. Many in the North-east, like their counterparts across the nation, were swayed by the 2014 Modi campaign slogans of development for all and rooting out corruption.

And in the North-east, corruption is rampant. So people want a change. Added to this, Mukul Sangma, the Congress chief minister of Meghalaya, is not a good team manager. He has alienated most of his senior cabinet members as well as party stalwarts by his authoritarian ways. Eight MLAs, including five from the Congress, defected from the party early this month. Right through 2017, there has been a steady stream of desertions from the ruling party. 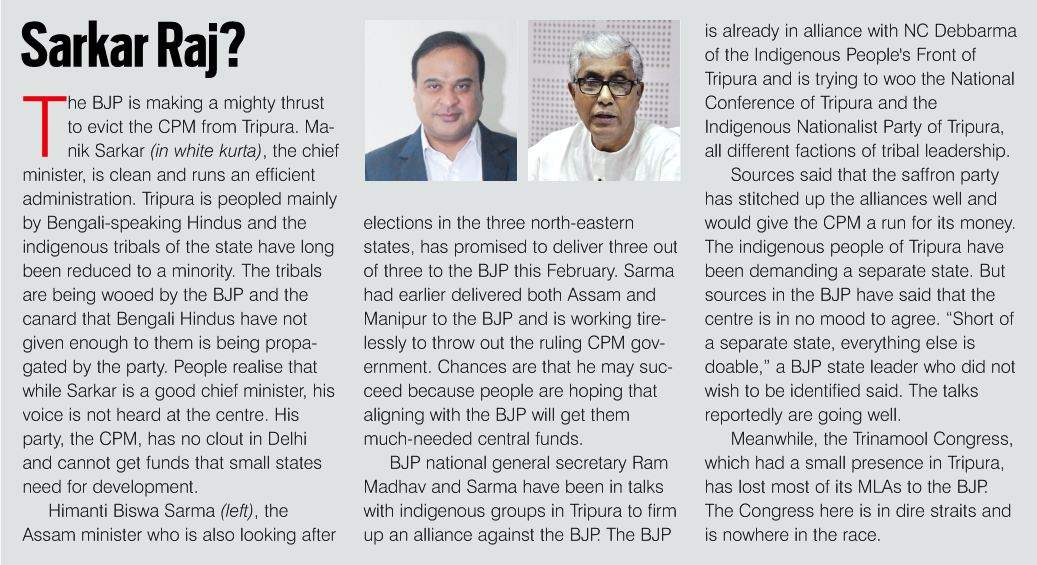 Not all the departing lawmakers have joined the BJP. Many have opted for the regional National People’s Party (NPP) led by Conrad Sangma, the son of the late Lok Sabha speaker, PA Sangma. The NPP is an ally of the BJP in Manipur and has its own regional identity. It is also attracting members in Meghalaya. It helps those opposed to Mukul Sangma leave the Congress and yet not be part of a party which is seen as anti-Christian and anti-beef. In the hill regions, the cheapest meat available is beef. The BJP and the NPP are unlikely to have an alliance ahead of the elections, but can join together later to form the government. “The BJP will be part of any future government in Meghalaya… they may not be in a position to do so alone,” said Manas Chaudhuri, the well-respected editor of The Shillong Times, to India Legal.

Meghalaya has had a Congress government for decades. But people are tired of it and a section, especially the non- tribals—Bengalis, Assamese, Nepal is and others—will vote for the BJP. Tribals have a choice between the BJP and regional outfits like the NPP and the Hill State People’s Democratic Party, which fought for a separate hill state. Meghalaya, like Nagaland, was once part of Assam. The Congress star is sin­king at the centre. “Congress does not have a fighting chance in Meghalaya,” said Chaudhuri.

In Nagaland, the BJP is already in alliance with the ruling Naga People’s Party and other smaller regional outfits. The BJP, however, is a junior partner and does not call the shots. There is also massive infighting within the Naga People’s Party. BJP in-charge of the North-east Ram Madhav said in a recent interview: “We are serious about bringing a stable and development-focused government in Nagaland. What happened in the last three-four years was that the government has changed at least three-four times, there are ministers who have taken oath four times in the last five years. We are looking for an option which would help us in taking forward and amicably concluding the Naga talks, which have progressed to a great extent.”

Efforts had been on to conclude the Naga talks ahead of the elections and place the BJP’s trump card before the peo­ple. Intense negotiations are on in Delhi and Kohima. But a last-minute hitch is threatening to unravel these plans. Where exactly the talks are stuck is not known but it obviously has to do with the Naga demand of amalgamating all territory where they are settled in neighboring states into a “Greater Na­galand”. This obviously is not agreeable either to Manipur, Assam nor any other region where the Nagas are settled.

Political outfits, cutting across party lines, including the BJP, the ruling Naga People’s Front (allied to the NDA at the centre), the Congress and all regional groups  have  come together to demand a solution to the Naga issue before the elections. Without a final word on the future of the Nagas, there would be a general boycott of the elections, leading perhaps to a serious constitutional crisis. Much will depend on how quickly the centre can work out a solution. But that will be a tough call. The impatience of the Nagas is understandable as they have been strung along by various central governments for decades.

The NSCN(K) or the faction by SS Khaplang, is not in the talks. The Khaplang faction is not the dominant outfit but carries weight among tribes living in the India-Myanmar border areas. Many of them live and work out of Myanmar. Khaplang died last year in his base in Myanmar and the outfit for the moment is leaderless. So this is the right time for the government to sign a peace deal with the NSCN and be able to capitalise on it for the polls.

The Congress is nowhere in the picture in Nagaland either. The last Congress chief minister was SC Jamir from 1993-2003. He was a governor of Maharashtra and Goa, but is now too old now to lead a Congress charge in Nagaland. As in Meghalaya, the BJP is likely to be part of a coalition government.

The BJP’s position no longer looks as strong in Nagaland as it did two weeks ago.