There is much that is murky in the top echelons of the Indian coast guard, which is meant to guard India’s vast coastline. The scuttling of KPS Raghuvanshi’s appointment as inspector general has forced him to knock at judiciary’s doors [/h2]

The 26/11 attack in 2008 exposed holes in India’s coastal security. Ten heavily armed terrorists from Karachi reached Mumbai through the sea-route, killed 166 and hurt 300, as they attacked various sites in India’s financial hub. After the initial shock, the government moved fast and kicked in a process to enhance counter-terrorism measures, with an additional focus on coastal security. This allowed security agencies to recruit, promote and procure more men and materials.

However, a recent incidence of manipulation in appointments in the Indian Coast Guard has shown that few lessons have been learnt by senior officers for enhancing security and making sure that it is in the hands of capable people. So blatant has this favoritism become that the Delhi High Court had to pass strictures against top Coast Guard officials.

Raghuvanshi’s credentials were excellent. An alumnus of the prestigious Naval War College (the US), he was the first
person from his batch to be selected for the Indian Coast Guard. He joined it as assistant commandant in January 1984. In May, 2006, he stood first among DIGs and was shortlisted for National Command College, South Korea. He was awarded the Tatrakshak Medal by the President of India on August 15, 2007, for meritorious service. In September 2008, he came first in a National Defense College course in New Delhi.

The manipulation to deny Raghuvanshi his promotion allegedly involved collusion between Admiral Chopra and Binoy Kumar, then joint secretary in the Ministry of Defense.

Raghuvanshi’s lawyers, BP Singh and Parma Nand, allege that the manipulation to deny him promotion involved collusion bet-ween Admiral Chopra and Binoy Kumar, then joint secretary in the Ministry of Defense (MoD). The new vacancy occurred in the organization due to the creation of fresh posts in the aftermath of 26/11 attacks. While these senior posts were created for more effective administration of India’s vast coastline of over 7,500 km, few realized it would be embroiled in unseemly controversy.

DIG KPS Raghuvanshi (left), who was denied the IG post despite his credentials

The flouting of rules was brought up before a double bench of the Delhi High Court comprising of Justices Reva Khetrapal and Pratibha Rani. In their judgment, they said the department arbitrarily changed rules to deny Raghuvanshi’s promotion. First, Admiral Chopra downgraded his Annual Confidential Report (ACR) and secondly, Kumar “clandestinely” granted “post-facto” approval of new promotion rules to favor Pande, in violation of rule books.

The judges expressed their dismay that two high-ranking officials belonging to the IAS and the Indian Navy had played with the career of a bright official against the written advice of the then defense secretary. The judgment said: “Indubitably, the proposal for amendment of CGO (Coast Guard Office rules) 02/2005 was originally rejected at the level of Defense Secretary, i.e., on 16.04.2009. Indubitably also, the MoD had then directed the CGHQ (Coast Guard Head Quarter) to follow the CGO 02/2005 and conduct the DPC (Departmental Promotion Committee) expeditiously. Since the said proposal was originally rejected at the level of Defense Secretary, the ‘post facto’ approval granted by the Joint Secretary (Navy)/MoD on 19th June, 2009, was without any authority and an attempt to ride rough-shod over the orders passed by the Defense Secretary.”

Questioning the power of Admiral Chopra to review Raghuvanshi’s ACR, the judgment held: “The stand of the Respon-dents that a request was made to the Ministry of Defense on 13.04.2009 requesting for grant of dispensation to Vice Admiral Chopra, i.e., Respondent No. 2, to review ACRs of the officers who he had not observed for three months and that the MOD vide its letter dated 23.04.2009 acceded to the request and directed the Department that review of ACRs … is again bereft of merit and contrary to the record.

“The record shows that though such dispensation was sought by the CGHQ on 13th April, 2009, it was categorically refused by the MoD vide its communication dated 23rd April, 2009, and the directions issued by the Ministry of Defense in this regard were that:- ‘Review of ACRs by the officer who has not observed the CG Officers for three months may be completed as per provisions of CGO 04/2005.’ (MoD ID No. 472/D (CG-R)/09 dated 23rd April, 2009).”

Coming down heavily on the manipulation of merits, the judgment held: “… we find that the Petitioner (Raghuvanshi) has succeeded in establishing his case of selective change of ACR criteria to manipulate merit by the Respondents smacking of arbitrariness. The Petitioner has also succeeded in establishing that the review of his ACR for the period 2008-09 by Respondent No. 2, then Direc-tor-general in violation of para 54 of CGO 04/2005 was to his detriment, resulting in his being punished twice over for the same incident (a minor accident)…. ”

The judges directed the respondents, MOD/ Coast Guard, to hold a fresh DPC within a six weeks time (judgment was delivered on September 4, 2014) to rectify their omission and commission. But the respondents tried to once again stall the high court’s directive by filing a review petition that was dismissed on December 19, 2014.

While the Coast Guard indulged in senseless litigations using the public exchequer, Raghuvanshi had to bear the cost of hiring lawyers and travel to and fro. Is this the way to treat an upright officer? Sadly, he is one among several others in the defense services who suffered manipulation in their promotions, leaving them bitter. How then can he, and many others like him, concentrate on securing the country’s borders? 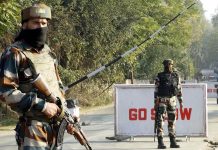