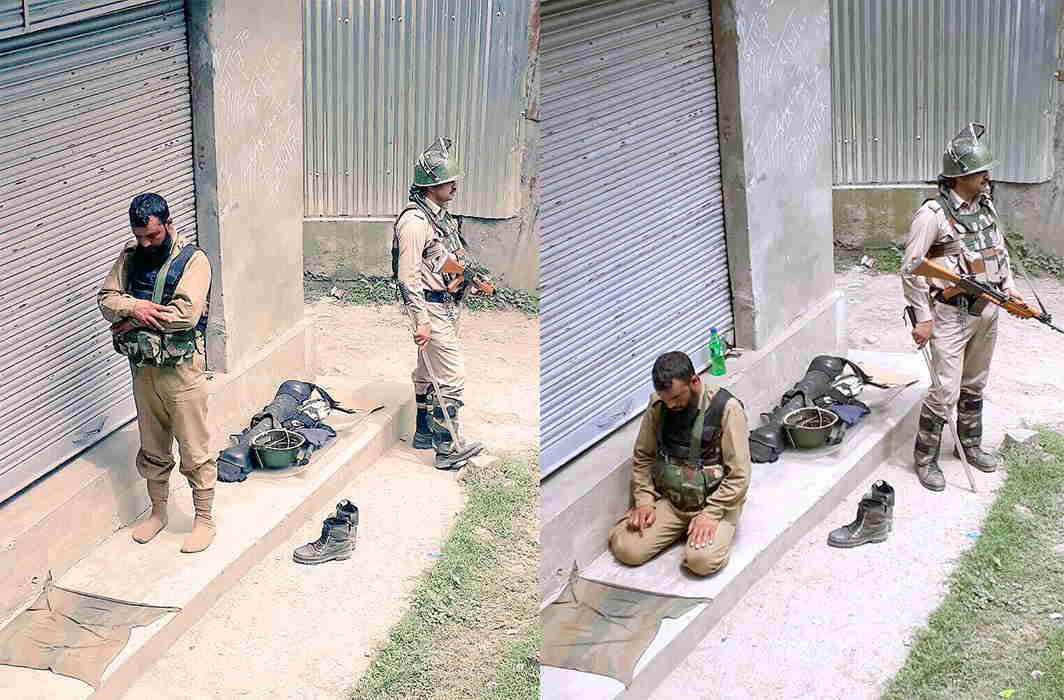 Above: The two pictures above, shared on Twitter by the Srinagar unit of the Central Reserve Police Force (CRPF), tell a story of unity amid diversity in the force that is securing lives and property in troubled Srinagar. The picture, shared on Saturday, shows a Muslim CRPF jawan at his afternoon prayers, while his partner (possibly a Hindu) stands guard. This unity defies the current political rhetoric against tolerance that is inciting violence around the country. (Picture: courtesy CRPF)

Emphasising on the plurality that was India’s construct, 114 veterans of India’s Armed Forces, have written an open letter to the Centre and the states, pointing out, what they call are, “recent developments in the country”

Letters have been mailed to the Prime Minister, Chief Ministers, and Lieutenant Governors (in all cases where email addresses were publicly available), the veterans claim.

They say that the Armed Forces represent pluralism. “Differences in religion or caste or language make no difference to our esprit de corps, and we have always fought shoulder to shoulder for the defence of our nation. We are one family.”

And the reason the letter was sent out was that they felt “distressed at recent developments in our country, which go against the secular and democratic values enshrined in our Constitution.

“This open letter,” they say, “expresses our anguish at the lynching of citizens by cow vigilantes, the muzzling of media outlets, the silencing of dissent by characterising it as sedition, and the general climate of suspicion and hate in the country.”

The following is the text of the letter, verbatim.

An Open Letter from Veterans of the Armed Forces

To: the Prime Minister of India, Chief Ministers of the States, and Lieutenant-Governors of the Union Territories.

We are a group of Veterans of the Indian Armed Forces who have spent our careers working for the security of our country. Collectively, our group holds no affiliation with any single political party, our only common commitment being to the Constitution of India.

It saddens us to write this letter, but current events in India have compelled us to register our dismay at the divisiveness that is gripping our country. We stand with the ‘Not in My Name’ campaign that mobilised thousands of citizens across the country to protest against the current climate of fear, intimidation, hate and suspicion.

The Armed Forces stand for “Unity in Diversity”. Differences in religion, language, caste, culture or any other marker of belonging have not mattered to the cohesion of the Armed Forces, and servicemen of different backgrounds have fought shoulder to shoulder in the defence of our nation, as they continue to do today. Throughout our service, a sense of openness, justice and fair play guided our actions. We are one family. Our heritage is like the multi-coloured quilt that is India, and we cherish this vibrant diversity.

However, what is happening in our country today strikes at all that the Armed Forces, and indeed our Constitution, stand for. We are witness to unprecedented attacks on society at large by the relentless vigilantism of self-appointed protectors of Hinduism. We condemn the targeting of Muslims and Dalits. We condemn the clampdowns on free speech by attacks on media outlets, civil society groups, universities, journalists and scholars, through a campaign of branding them anti-national and unleashing violence against them while the State looks away.

We can no longer look away. We would be doing a disservice to our country if we do not stand up and speak for the liberal and secular values that our Constitution espouses. Our diversity is our greatest strength. Dissent is not treason; in fact, it is the essence of democracy.

We urge the powers that be at the Centre and in the States to take note of our concerns and urgently act to uphold our Constitution, both in letter and in spirit.