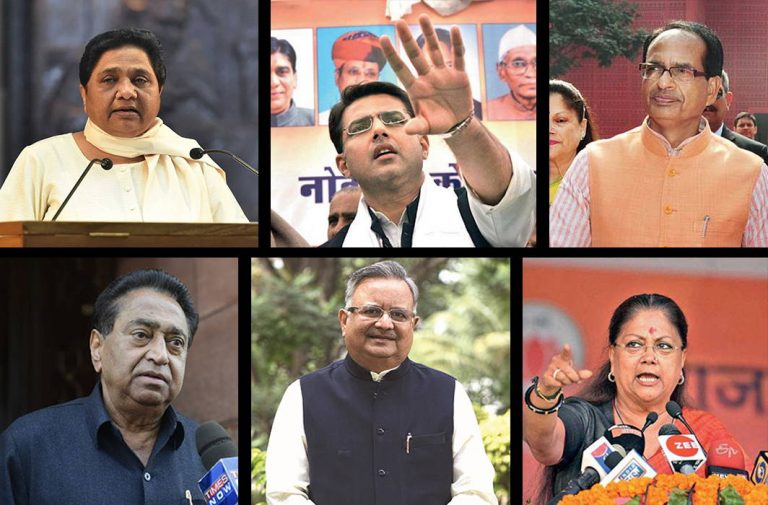 Elections a big test for BJP ahead of the 2019 Lok Sabha polls, will also test whether Congress’ ambition of a grand alliance will actually take off or flop

Setting the stage for what is largely touted to be the semi-finals for the 2019 Lok Sabha polls, the Central Election Commission, on Saturday (October 10), announced the poll schedule for Madhya Pradesh, Rajasthan, Chhattisgarh, Mizoram and Telangana state assemblies.

While the results for the polls in each of these states will be announced simultaneously on December 11, voting would take place in a phased manner, with the 90-member Chhattisgarh assembly going to polls first in two phases – on November 12 for 18 constituencies in the Left-Wing extremism affected seats in southern Chhattisgarh and on November 20 for the remaining 72 assembly segments. Polls for the 230-member Madhya Pradesh assembly and 40-member Mizoram assembly will happen simultaneously on November 28. Rajasthan, which has a 200-member assembly, will go to polls along with Telangana on December 7.

In Telangana, where there is a caretaker government at the moment under chief minister K Chandrasekhar Rao, polls will be held on December 7. Rao had, last month, declared his decision to dissolve the 119-member state assembly leading to speculations that the elections in the state could coincide with those in MP, Chhattisgarh, Rajasthan and Mizoram. In Telangana, the Congress is eyeing an alliance with Left parties, YSR Congress and Chandrababu Naidu’s Telugu Desam Party while the BJP is hoping for either an alliance or a “calculated understanding” with Chandrasekhar Rao’s Telangana Rashtra Samiti.

The announcement of the poll schedule came after a brief controversy over the last minute change in the scheduled time of the press conference addressed by the chief election commissioner. While CEC Rawat was initially set to announce the poll schedule at 12.30 pm, the timing was changed to 3 pm without any explanation. The Congress was quick to point out that the Prime Minister was due to address a poll rally in Rajasthan’s Pushkar at 1 pm. Congress media cell chief Randeep Singh Surjewala suggested that the change in timing of Rawat’s briefing was a sign of the EC compromising on its independence, possibly to allow the PM to announce sops that he would not have been able to if the poll schedule had already been announced because the model code of conduct for elections would have then taken effect.

The BJP has been in power in Madhya Pradesh and Chhattisgarh for the past 15 years. In both these states, it has chief ministers – Shivraj Singh Chouhan (MP) and Raman Singh (Chhattisgarh) – who enjoy a mass base. In contrast, the Congress has no leader with a pan-Chhattisgarh base while in MP, it has a problem of plenty and is beset with factional feuds between state unit chief Kamal Nath, campaign committee chief Jyotiraditya Scindia, former chief minister Digvijaya Singh, former union ministers Suresh Pachouri and Arun Yadav and incumbent Leader of Opposition Ajay Singh.

In Rajasthan, a state which traditionally votes out an incumbent government every five years, the BJP is currently in power. Chief Minister Vasundhara Raje is facing a strong anti-incumbency and no longer enjoys support of either the central leadership of Modi and Shah or of her party’s state cadres. The Congress here, under state unit chief Sachin Pilot, has been making an impressive revival but his ambitions of becoming chief minister also clash with Ashok Gehlot, a former CM and arguably the most powerful national general secretary of the Congress under the Rahul Gandhi dispensation. The Congress would hope, and pray, that Gehlot and Pilot don’t work at cross purposes and jeopardize the best chance of a victory that the Congress has in this round of elections.

In Mizoram, the only Congress-ruled state going to polls in this round, the BJP is hoping to stitch together an alliance with regional outfits to oust chief minister Lal Thanhawla and effectively wipe out Congress rule from the north east region.

The political stakes are obviously very high, not just for the incumbent governments but also for the challengers. For the Congress, a defeat or limited victory in these States would hit the already dampened morale of the party workers who have had no significant poll victories to cheer about in the past four and a half years – a blot on the tenure of party president Rahul Gandhi that he desperately wants to erase.

For the BJP, though a defeat in any of these states would predictably be painted by the party leaders as an anti-incumbency vote, the fact remains that it could seriously dent Prime Minister Modi and BJP president Amit Shah’s hope of repeating a 2014-like Lok Sabha victory, leave alone an improvement on it, six months from now.

By all accounts so far, the BJP – though steadily losing its sheen due to multiple reasons – remains poised for a satisfactory performance in most of these states (Rajasthan is perhaps the only exception where, by all accounts, the party is tipped for a rout).

However, the elections and their results will have larger, pan-India ramifications. Each of these states (Mizoram being an exception), traditionally, have had bipolar contests between the Congress and the BJP, with Mayawati’s BSP and Akhilesh Yadav’s Samajwadi Party being bit players.

With an eye on stopping another Modi-Shah victory in 2019, the Congress had hoped to view these elections as a test case for trying the grand alliance experiment, knowing well that doing so in these states would mean ceding their political space to potential, albeit dicey, alliance partners. The Congress had reached out to BSP and SP for an alliance these states to consolidate the “secular, anti-BJP” votes. However, Mayawati, the hard political bargainer that she is, refused to play ball. She set tough conditions for the alliance – in all states or none was her refrain – and wanted a “respectable” chunk of seats (the Congress says she was eyeing an unrealistic number).

With the Congress unwilling to play on her terms, Mayawati pulled the plug and decided to ally with former Congress leader Ajit Jogi in Chhattisgarh andis currently in talks with the SP and some regional outfits for a pact in Rajasthan and MP. In MP, the BSP has already declared 22 candidates. By indications so far, the SP has decided to stick with the BSP for an alliance and hinted that a mahagathbandhan, with Congress as a component, may not take shape just yet. Rahul Gandhi and some of his party colleagues have, however, tried to downplay the initial frictions and claimed that a shot at cobbling together the grand alliance for 2019 isn’t lost as yet.

The fissures within the Opposition camp are definite good news for the BJP which is facing an undeniable anti-incumbency in MP, Chhattisgarh and Rajasthan while also being beset with factional feuds. A fractured Opposition works well for the BJP’s poll machinery because it makes it easier for the saffron camp to hold on to its voters while those against it split up.

The results, whichever way they might swing, will force all political camps to recalibrate their poll strategy for 2019. The election outcome will sound the bugle for the big fight.