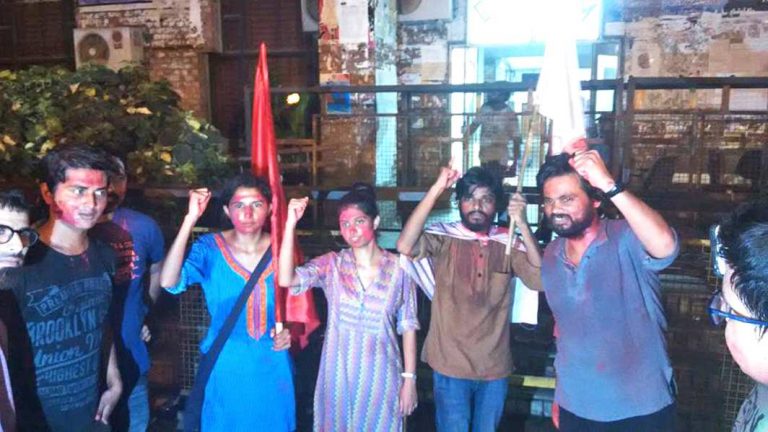 Despite sustained efforts of the Bharatiya Janata Party (BJP) to ‘saffronise’ at least the politics of the Jawaharlal Nehru University (JNU), if not its syllabus and social ambience, a United Left once again succeeded in painting the premier institution ‘red’, as the results of the varsity’s students union elections were declared late on Sunday night.

A United Left—brought together in its common resistance to the rising clout of the BJP and its ideologists, the RSS, through its students’ wing, the Akhil Bharatiya Vidyarthi Parishad (ABVP) and also a Vice Chancellor who has been criticized for pursuing a ‘saffron agenda’—swept the JNUSU polls for all four major posts of president, vice president, general secretary and joint secretary.

However, the ABVP—which has seen a gradual rise in its political clout in the otherwise traditionally Left-leaning varsity—registered a strong vote-base, coming second in all seats, while the Ambedkarite party, Birsa Phule Ambedkar Students’ Association (BAPSA) stood third.

In an expected setback for the Congress-affiliated National Students Union of India (NSUI), all its candidates who were in the running for the top four posts finished a poor fourth—securing fewer votes than those polled for the NOTA (None of the above) option.

Although the Left Unity panel of student bodies AISA-SFI-DSF (All India Students’ Association, Students’ Federation of India, and Democratic Students’ Federation, respectively) managed to keep the ABVP away from winning the polls, the significant jump in the NOTA votes should be a cause for concern to those who have won the polls, as it also showcases a growing resentment among students at the varsity against its dominant Left politics. Similarly, for the ABVP, the NOTA votes presents an opportunity—of reaching out to these voters and convincing them to vote for the saffron brigade if red isn’t their colour.

The rise in NOTA votes aside, another cause of concern for the Left candidates in the future should be the dip in the voter turnout per cent. This year’s JNUSU polls saw a 56 per cent voter turnout, three per cent less than the previous year’s polls. However, in real terms, this year’s turnout indicates a massive dip since the JNU administration had slashed the number of seats for students at the varsity in the current academic session by a 1,000.

This aside, the Left Unity panel shouldn’t forget that it managed to retain its hold on all key JNUSU posts only because individual Left-affiliated parties managed to set aside their personal differences and contested as a united coalition to take on the BJP-affiliate, which still managed to retain—like the previous year’s elections—the largest vote share polled for one party. If all votes polled were broken down to an average, the ABVP would have secured 950-odd votes for every central post, and over 10 councillor posts at the school-level, primarily from science. And though this is a decline when compared to last year’s 1,200 votes for the ABVP, the dip can also be attributed to greater Left unity, lower voter turnout and a general sentiment among JNU students of resisting the BJP’s interference in the running of the varsity through writs by the Centre that are purportedly executed by a controversial vice chancellor who has on more than a few occasions established his proclivity for the saffron ideology—the latest being his demand for installing a defunct Army tank in the JNU campus to “instill patriotism” in students.