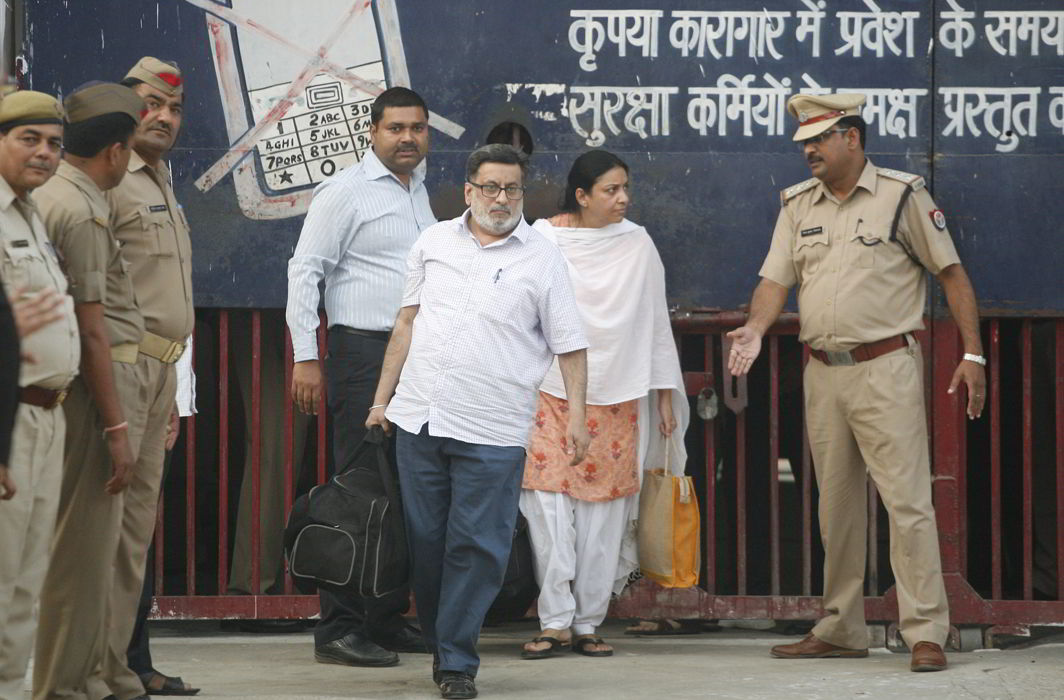 Above: Rajesh and Nupur Talwar coming out from Dasna jail. Photo: Anil Shakya

Rajesh and Nupur Talwar were released from the Dasna Jail in the Ghaziabad district of Uttar Pradesh a minute before 5 pm this afternoon. They had been acquitted of murdering their only daughter Aarushi and their domestic help Hemraj. On Friday (October 13) the Allahabad High Court had acquitted them using the provision of benefit of the doubt.

Nine years after that horrible day, the two are now free – provided the trial court does not move the Supreme Court on the issue. They came out of the jail and did not talk to anybody standing around, including the media. They got into Rajesh’s elder brother Dinesh’s car and drove off. Dinesh is a famous ophthalmologist, according to Chandan Rai, the Ghaziabad correspondent of APN news channel, the sister concern of India Legal.

They had decided not to return to their old house in Jal Vayu Vihar in Sector 25 Noida, and moved to his sister’s house in Haus Khas instead. On the way they stopped to perform puja at the Sai Temple in Noida before proceeding to his sister’ house. Ghaziabad police escorted the car till the end of their jurisdiction.

The two are on six-month bail and have signed bond papers at the court.

The order from the Allahabad High Court had arrived at the trial court on Friday itself, but procedural delays meant they were held back in Dasna jail for so long. The release documents were sent from the trial court to the jailer, who inspected the documents and then ordered the release.

The high court order was pronounced in the morning of Friday, but by the time the order was printed and handed over to the lawyers of the plaintiffs, it was late in the afternoon. Rules say that certified copies of the order must be arrived at from the Registrar. While that process was on, it was found that there was a critical spelling error in a name (of the Talwars) in the original order. Hence it went back to be corrected.