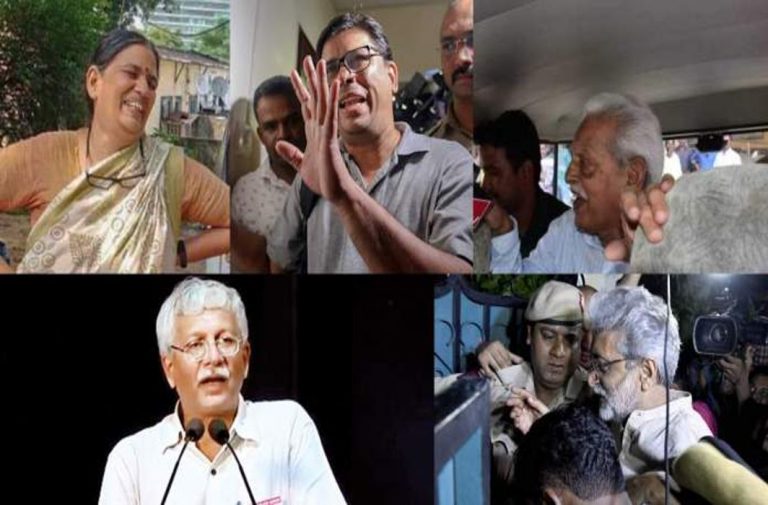 With the Supreme Court set to resume hearing, on Thursday (September 6), the petition filed by five eminent public intellectuals challenging the recent arrest of human rights activists over a purported “conspiracy” against the government, the Maharashtra police has filed its affidavit before the court explaining the reasons for the police action.

Last week, teams of the Maharashtra Police from Pune had carried out nationwide raids against human rights activists, lawyers and advocates of civil liberties. The police had, in a move criticized by many as a government-ordered crackdown on dissent, arrested renowned activists Sudha Bharadwaj in Faridabad, Gautam Navlakha in Delhi, Vernon Gonsalves and Arun Ferreira in Mumbai and Varavara Rao in Hyderabad.

While the cops had initially claimed that the arrests were made as the investigation in the communal clashes of January 1 at Bhima Koregaon in Pune had pointed at the role of the five arrested activists in planning the Elgar Parishad event that preceded the violence and of inciting the conflict between members of the backward community and the upper class Marathas. The violence had claimed one life.

However, many doubted the veracity of the police’s claims. At least two former judges – Justice PB Sawant and Justice Kolse Patil – who were organizers of the Elgar Parishad too went public with their assertion that the arrested five were not involved in any way with the Elgar Parishad conference.

It also emerged that names of those who were raided or arrested had not figured in the FIRs filed by the cops following the violence in Bhima Koregaon. The verbal accusations by the police against the five did not match with the slew of charges they officially leveled against the arrested who were all charged under a barrage of sections of the Indian Penal Code and the draconian Unlawful Activities (Prevention) Act (UAPA).

With criticism mounting, the Maharashtra police promptly built a new narrative of the allegations against the five activists – branding them as members of the banned Communist Party of India (Maoist) who were abetting naxalite activities and were involved in a conspiracy against the State.

The Supreme Court, hearing the petition filed by eminent public intellectuals Romila Thapar, Maja Daruwala, Devaki Jain, Prabhat Pattnaik and Satish Deshpande who had collectively challenged the arrests, had refused to grant police custody of the five activists and ordered their house arrest till September 6. During the proceedings, Justice DY Chandrachud had famously described dissent as the “safety valve of democracy”.

The Maharashtra police have also reiterated their plea for taking the activists under police custody, asserting that the five could destroy evidence and alert their accomplices while staying under house arrest. The cops have also reiterated their accusation that the activists were conspiring against the elected BJP-led governments in Maharashtra and at the Centre and planning violent protests across the state and other parts of the country that, if allowed to be execute, would cripple law and order and lead to chaos.

The police have also said that the material recovered from the objects seized by the cops during the August 28 raids at the residence of these activists – laptops, mobile phones, books, notes, etc. – has also pointed towards their involvement with the CPI (Maoist) and their plans for inciting violence across different parts of the country.

The police have, along with the affidavit, also submitted what they term as “evidence” against the activists to the apex court in a sealed envelope and claimed that once the court examines these documents it would be convinced that the arrested were planning and preparing for a series of criminal offences in connivance and conspiracy with other persons.

The apex court bench of Chief Justice Dipak Misra and Justices AM Khanwilkar and DY Chandrachud is scheduled to hear verbal submission by the counsel for Maharashtra police and the counsel for the petitioners on Thursday (September 6).