Home Top News of the Day news Amendments to the SC/ST Act: What a Volte-Face! 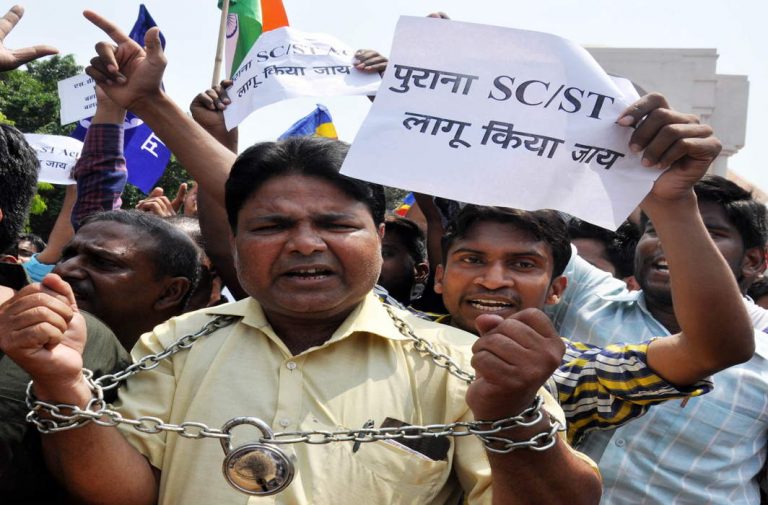 Above: Members of Dalit organisations have staged nationwide protests against the apex court’s verdict diluting the SC/ST Act/Photo: UNI

Ultimatums from formidable votebanks, besieged by anger, can deflate the machismo of the most imperious of governments, more so when they come in an election year. The latest evidence of this facet of democracy is the Narendra Modi government’s move to seek Parliament’s nod for amending the Scheduled Castes and Scheduled Tribes (Prevention of Atrocities) Act. This is meant to undo the Supreme Court-ordered dilution of the stringent social justice legislation.

The March 20 verdict by the Supreme Court bench of Justices AK Goel (now chairman of the National Green Tribunal) and UU Lalit had quashed provisions of the Atrocities Act which had mandated immediate arrest of persons accused under offences laid out in the legislation and denial of anticipatory bail to them in such cases.

The top court had, while delivering its verdict in Subhash Kashinath Mahajan v State of Maharashtra, concluded that the Act was being widely misused to harass people, particularly public officials, from the non-SC/ST communities. While quashing provisions for immediate arrest and denial of anticipatory bail, the Court also laid out new directives to be followed for investigation of cases filed under the Atrocities Act. “We are of the view that cases under the Atrocities Act also fall in exceptional category where preliminary inquiry must be held. Such inquiry must be time-bound and should not exceed seven days. Even if preliminary inquiry is held and a case is registered, arrest is not a must,” the verdict had said.

The amendments to the Atrocities Act, approved by the Union cabinet last week to reverse the SC verdict, will be moved for passage in Parliament before the ongoing monsoon session ends on August 10.

The amendments were suggested by a group of ministers headed by Home Minister Rajnath Singh.

Though the government has not made public the exact changes that the centre has proposed, sources told India Legal that three new subsections will be inserted in the legislation’s Section 18. These subsections will expressly state that there will be no requirement for a preliminary probe to be conducted before registering an FIR for cases filed under the Atrocities Act, provision of anticipatory bail will not apply to these cases and the arrest of an accused under the Act will not require any approval.

A senior BJP minister who was privy to the government’s plan told India Legal that aside from amendments to the Atrocities Act, the centre was also contemplating moving a constitutional amendment in the winter session of Parliament that would list the SC/ST Act under the Ninth Schedule. Under Article 31B of the Constitution, Acts listed under the Ninth Schedule enjoy immunity from review by any court or tribunal and can only be amended or repealed by a competent legislature.

Nationwide protests by Dalit groups that broke out in the aftermath of the SC verdict and claimed at least nine lives put the Modi government on notice. In ominous signs for the government, the protests had the support of key BJP allies—Union ministers Ram Vilas Paswan, Ramdas Athawale and Upendra Kushwaha—as well as several MPs from the saffron party.

Dalit and tribal communities account for nearly 16 and nine percent of India’s population, respectively. They form a massive electoral bloc in Rajasthan, Madhya Pradesh, Chhattisgarh—each of which will see assembly polls later this year—and Uttar Pradesh, besides holding the power to swing electoral results in at least half a dozen other states. The price that the centre would have paid for failing to reverse the SC verdict was, thus, unambiguous—losing support of a sizeable section of these communities in the coming assembly and general elections and risking swift erosion of the brute mandate that the BJP and its NDA partners got in the 2014 Lok Sabha polls.

Obviously, Modi didn’t want to take the risk. On April 2, while the country witnessed massive protests by Dalit groups, the centre had moved a hurriedly drafted review petition in the apex court against the March 20 verdict. The petition, however, was thrown out by the Supreme Court within a month.

Modi and his government were once again staring at the angst in the SC/ST community and their over ten dozen political representatives—a majority of them elected to the Lok Sabha on a BJP ticket in 2014.

Paswan had rallied SC/ST MPs of the NDA coalition around Modi and demanded immediate reversal of the SC verdict through legislative action and, sources say, also gently dropped hints that the centre’s failure to do so would make his continuation as a BJP ally untenable. Similar messages were sent by Athawale, Kushwaha and over a dozen Dalit BJP MPs to the BJP leadership.

It is no secret that Paswan, Athawale, Kushwaha and several sitting BJP MPs have been looking for an excuse to break ties with the saffron party. These leaders sense that the political winds are changing and Modi or his party no longer enjoy the enormous confidence of the electorate that propelled them to power in 2014. The continuing attacks on religious minorities, Dalits and tribals—all crucial vote banks—by self-styled vigilantes perceptibly aligned with the BJP, coupled with a growing list of Modi’s unfulfilled poll promises have taken the sheen off the saffron wave.

As the general election approaches, an increasingly aggressive and united opposition is only making the going tougher for the BJP.

The SC verdict gave political weather vanes like Paswan the excuse they needed to break away from the BJP. The script was familiar—religious and social minorities don’t feel safe under the BJP regime. While the Modi government has sought to undo the damage caused by the top court’s verdict by amending the Atrocities Act, sources say the move may not entirely serve its purpose.

Though the second round of nationwide protests by Dalit groups that was scheduled for August 9 to demand a rollback of the SC verdict has now been made redundant by the centre’s proposed amendment, Paswan and Co. still have another reason to keep Modi and the BJP on tenterhooks.

The centre’s decision to appoint Justice Goel as chairman of the NGT immediately after his retirement from the Supreme Court has been red-flagged by Paswan, Athawale and Kushwaha as a reward for protecting upper castes at the cost of Dalits and tribals. The three BJP allies have continued with their demand for Justice Goel’s dismissal—something the centre is not keen on at the moment. Opposition parties are waiting with open arms for these BJP allies and Dalit and tribal MPs of the saffron party who might want to switch sides.

The centre may have found a legislative solution to the social juggernaut set in motion by the Supreme Court in March this year, but its real test awaits in the political challenge that lies ahead—to make the Dalits and tribals believe that the BJP, predominantly represented by Hindu forward and upper castes, will work for their interests.