The Supreme Court had, on June 4, issued notice on a petition filed by Asaram, challenging a Rajasthan High Court order, dismissing his plea for temporary suspension of sentence to avail ayurvedic medical treatment. 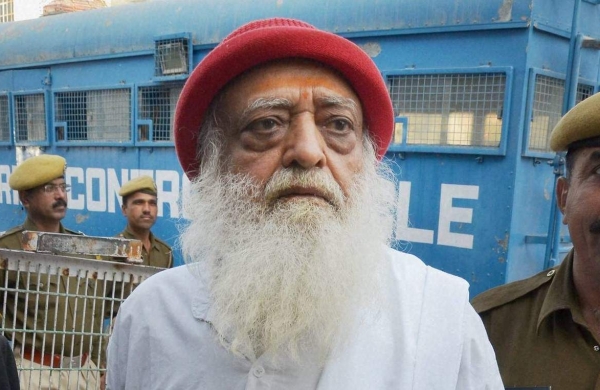 The Supreme Court will today hear the bail application of self-styled godman Asaram Bapu, convicted in a rape case.

The bench of Justice Indira Banerjee and Justice M.R. Shah will take up the matter today.

On June 7, the state of Rajasthan had filed its reply against the plea of Asaram. The bench of Justice Navin Sinha and Justice Ajay Rastogi had on June 8 adjourned the matter, saying that the reply was filed yesterday evening and they didn’t get the time to read it.

The bench had further asked Asaram’s Counsel to file his counter affidavit till Friday.

The Supreme Court had, on June 4, issued notice on a petition filed by Asaram, challenging a Rajasthan High Court order, dismissing his plea for temporary suspension of sentence to avail ayurvedic medical treatment.

The State of Rajasthan has submitted that Asaram, under the garb of his medical treatment, desires to get his sentence suspended. He has made two attempts of this kind earlier also, in 2014 and 2016 and during both times, the Apex Court had created a committee of Doctors, which had found that Asaram’s heath condition was stable and not critical that it would require any surgical management of the disease.

The spiritual guru, who claims to have millions of followers worldwide, has been given a life sentence for raping a 16-year-old girl. Asaram was arrested in 2013 after a case of sexual assault was filed against him by two of his followers, who alleged that he had assaulted their daughter.

Police said that the couple, who had sent the girl to one of his ashrams for spiritual lessons, were summoned to see her as she was “under the influence of some supernatural ghostly powers”.

They were then told to take their daughter to Jodhpur to meet the guru. The family reached the Jodhpur ashram on August 14, 2013. The following night, Asaram called the victim to his room on the pretext of “curing” her. He then raped the victim while her parents waited outside chanting his prayers, police said.

Police also said the guru forced the victim to perform sexual acts on him and threatened to murder her family, if she spoke about the incident. The victim told her parents what had happened the following day.