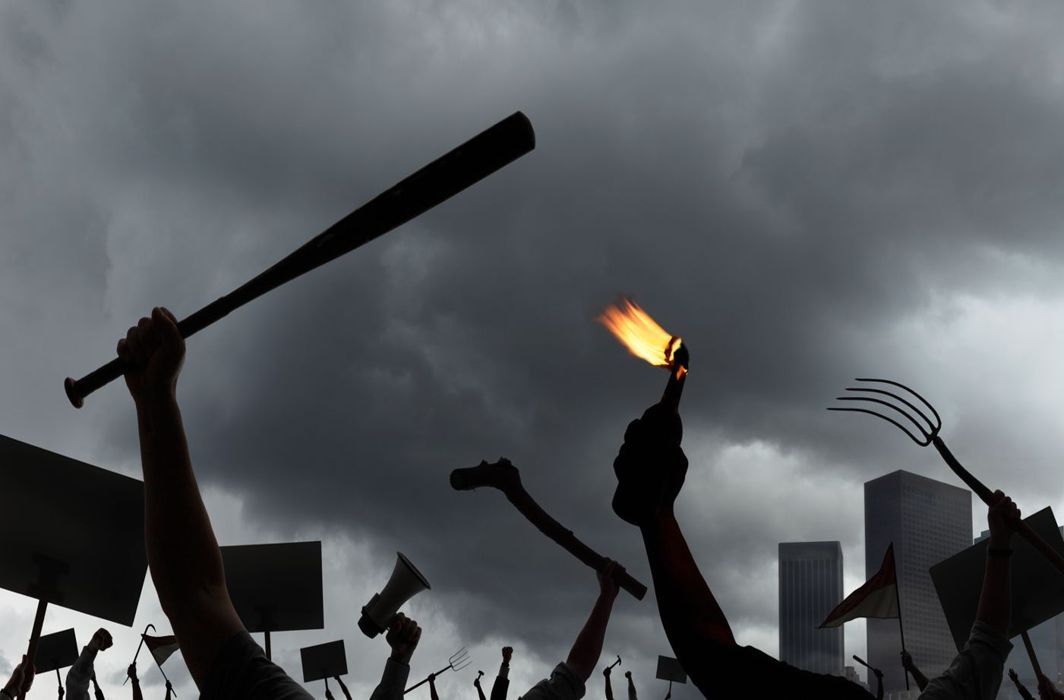 Soon after the BJP snatched a poll victory bringing to an end the 25-year CPI(M) rule in Tripura, the state erupted in violence with the CPI(M) workers and leaders being targeted by right wing groups.

At least 200 incidents from across the state have been reported in less than 24 horus with goons supported by what will now be the ruling alliance of the Indigenous Peoples Front of Tripura (IPFT) and the BJP attacking the offices and residences of the local Communist cadres, reported news portal The Wire.

The Indian Express (IE) reported that on Monday, in Belonia town, BJP workers and supporters brought down a statue of communist icon Vladimir Lenin with the help of a JCB amid cries of “Bharat Mata ki jai”. The BJP claimed that the statue was brought down by people “oppressed” by the Left.

The CPM claimed at least “200 cases of violence” against its cadres overnight, as well as attacks on its offices across the state the day the results were declared. It said frantic cadres had been calling in since the results about the attacks, and that its offices had been burnt down or vandalised. CPM state unit secretary Bijan Dhar said, till Monday, 514 workers and supporters of the party had been “physically attacked”, 1,539 homes of workers and supporters had been vandalised, 196 homes set on fire, 134 party offices vandalised, 64 offices burnt, and 208 offices “forcibly occupied” by supporters of BJP and alliance partner IPFT.

The Wire quoted a post from a young girl Kalyani Datta: “We all support communism and communsit party…And now we are getting haunted…my uncle can’t even go out of his room….Violence is everytwhere, in my native village and neighourhood, our local party offices are finished…they are beating labours and farmers,…. They are unscrupulously beating common people and burning party offices…I’m a girl of 19…yesterdy was the first night I couldnt sleep thinking about my risky life and about my parents, my villagers, my neighbourhood….what to do…please protect us please…..”

On the incident in which Lenin’s statue was brought down, the IE report quoted Tapas Datta, CPI(M)’s Belonia sub-division secretary as saying, “Eyewitnesses told me that after the statue fell, its head was dismembered from the body. And then, the BJP workers played football with Lenin’s head.”

South Tripura SP Ipper Monchak said the driver of the JCB, Ashish Pal, was arrested in the evening and let off on bail. “The statue remains where it has fallen. It will be removed by police tomorrow and given to the municipality for storage,” said Monchak, according to the IE report.

BJP south district secretary Raju Nath, who has been blamed by the CPI(M) of having planned the incident, said the statute fell because of an “overflow of anger”. “For years, there has been resentment against this statue of Lenin. It was built by the municipality and funded by the taxpayers’ money. Why should the taxpayer have to finance a statue of Lenin? Even if it was a statue of our former CPI(M) chief minister Nripen Chakraborty, nobody would have touched it — he was one of us and belonged to the country. But what does this foreigner Lenin have to do with our people?” Nath was reported to have said.

Local CPI(M) leader Datta said the statue was the only one of Lenin among 15-20 across Belonia town installed over the past two decades to beautify the city. “The others include statues of Rabindranath Tagore, Swami Vivekananda, Vidyasagar and Kabi Nazrul,”, he said.

SP Monchak said the police station where the JCB driver was held “had been gheraoed” by a crowd seeking his release.

“We would have released Pal in any case as this was not a non-bailable offence. We believe the JCB had been hired expressly for this purpose but we cannot say who hired it. An inquiry is still on,” said Monchak.