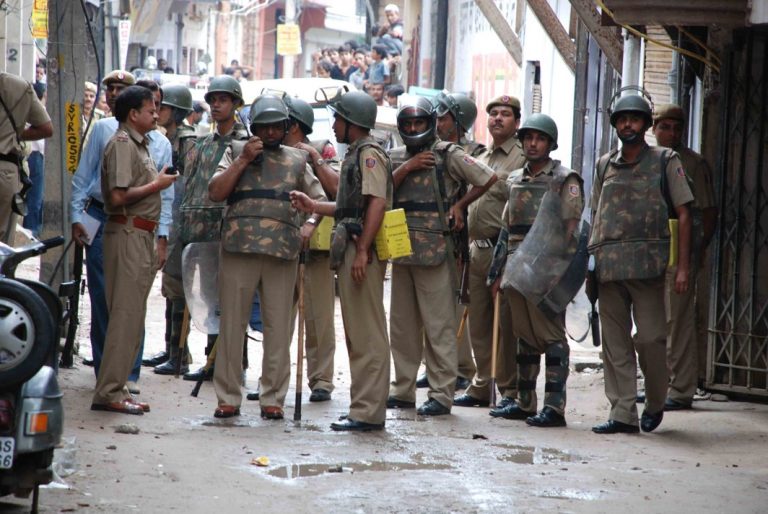 Above: Delhi police personnel on vigil after the Batla House incident (file picture)

The Delhi High Court on Thursday (May 3) directed Delhi police to conclude the trial involving Ariz Khan alias Junaid, co-accused in the 2008 Batla House encounter and who was arrested by the police recently within six months.

The bench of Justices S Muralidhar, I S Mehta directed the order in the case of the
co-accused Ariz Khan alias Junaid that trial court shall pass the order within six months from Thursday while deferring the appeal of Shahzad Ahmed, in the same case who was convicted of murdering Delhi Police Inspector Mohan Chand Sharma and assaulting other officers during the encounter.

“Within a period of six months from the date of framing of charge, the trial court shall conclude the recording of evidence and deliver the judgment against the co-accused Junaid,” the bench said. “The prosecution and the defence will fully co-operate with the trial court in adhering to the above time schedule also the original TCR of FIR No 208/2008 registered at PS Jamia Nagar shall, immediately after conclusion of the trial against Ariz Khan alias Junaid, be sent to this court.”

The bench’s direction came while hearing an application filed by Delhi Police under Section 482 CrPC through Additional Public Prosecutor (APP) Radhika Kolloru, seeking deferment of the present appeal filed by Ahmed who challenged his conviction by the trial court in 2013 pending conclusion of the trial against the co-accused Ariz Khan alias Junaid in FIR No 208/2008.

Delhi Police said in its application since the evidence in respect of the present pending appeal and the trial of co-accused Junaid are overlapping, the finding of the bench is bound to affect the decision of the lower court in the pending trial against Ahmed.

Bench noted police’s submission and said both cases are identical and any views expressed on the merits with respect to the evidence led against Ahmed “is bound to impact the impending trial against Junaid and the consequential decision of the trial court”.

“It will impact even the conduct of the trial in terms of examination and cross examinations of the witnesses. Either party may be prejudiced,” the bench held.

The court allowed the plea for sending the trial court records pertaining to the encounter to the chief metropolitan magistrate (CMM), south east district, Saket courts, where a supplementary chargesheet has been filed against the co-accused after his arrest on February 23 this year.

Two suspected terrorists, Atif Amin and Mohammed Sajid, were killed while two other suspects, Mohammed Saif and Zeeshan, were arrested.