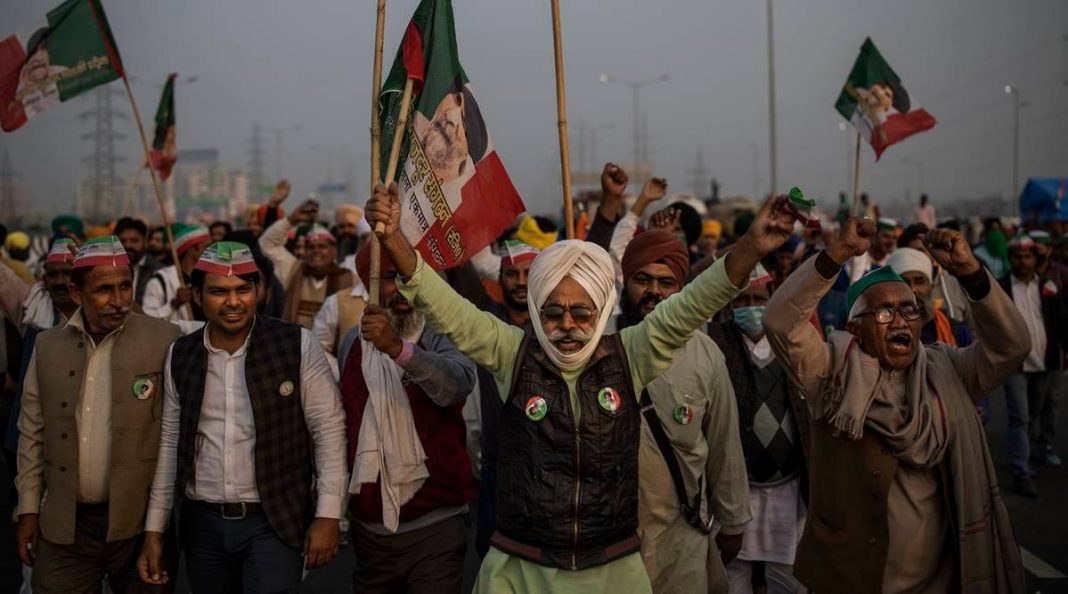 After a meeting of opposition leaders with the President, NCP chief Sharad Pawar said there was a request from all opposition parties to have in-depth discussion on farm bills but no suggestion was accepted and bills were passed in a hurry. Farmers are sitting on roads in the cold and expressing their unhappiness. It’s the duty of the government to address their issues and resolve the deadlock.

Former Congress President Rahul Gandhi said the parties informed the President that it is absolutely critical that these anti-farmer laws are taken back.

CPI-M chief Sitaram Yechury said the opposition parties have given a memorandum to the President asking to repeal agriculture laws and electricity amendment bill as they were passed without proper discussion.

Ahead of the meeting with President Ram Nath Kovind regarding the farm laws, CPI-M chief Sitaram Yechury said more than 25 opposition parties have extended their support towards the demand of withdrawing the three laws. The laws threaten India’s food security, he added.

The Shiromani Akali Dal Spokesperson Prem Singh Chandumajra on Wednesday said it is important to pressurise the government. If the farmers’ and the Centre don’t reach an agreement, then what sort of opposition political support can be given to the farmers will be decided by the 3rd week of December. The leaders of the political parties are due to meet President Ram Nath Kovind, ANI reported.

Kisan Sangharsh Committee’s Kanwalpreet Singh Pannu said the three farm laws should be withdrawn by the Central government. He said any amendment proposal won’t be accepted.

Farmers protesting at Singhu border received a written proposal from the government in an attempt to resolve the deadlock. Farmers say they would settle for nothing but the scrapping of legislations.

Bharatiya Kisan Union Spokesperson, Rakesh Tikait on Wednesday said the government has to withdraw the new agriculture acts. Farmers won’t go back, it’s a matter of their respect. He said the farmers’ union will discuss the Centre’s proposal and strategise accordingly.

Home Minister Amit Shah met farmers’ leaders after the Bharat Bandh nationwide protest against the Centre’s three contentious farm laws on Tuesday. The talks between the farmers’ leaders and the government failed with both the sides remaining firm on their stance. While the government has offered to make amendments in the new agriculture acts, the farmers demand complete scrapping of the laws.

The sixth round of talks scheduled to take place between the Agriculture Minister Narendra Singh Tomar and the farmer’ unions on Wednesday have been called off.

A clash erupted between the BJP and the Congress workers outside Rajasthan’s Jaipur. The incident took place outside BJP office during the protest against the Centre’s three contentious farm laws.

Deputy Chief Minister Manish Sisodia was not allowed to enter CM Arvind Kejriwal’s residence. Delhi police stopped him outside. Sisodia hurled questions at the Centre; Does this mean he is under house arrest? Why are all these security personnel posted here?

He is still waiting at the barricades.

Various organisations, including transporters, held peaceful protests in Jammu to express solidarity with protesting farmers. The main protest rally was taken out by J&K Transport Welfare Association (JKTWA) from Bikram Chowk to Digyana, blocking the Jammu-Pathankot highway. The JKTWA and over a dozen other social, religious and political organizations have extended support to the bandh call. Officials said the protests remained peaceful and no untoward incident was reported from anywhere in Jammu district or elsewhere in the province, PTI reported.

A farmer represntative from Bharatiya Kisan Union at Delhi-Noida border asked protesters to let an ambulance cross without any obstruction.

Karnataka Chief Minister B. S. Yediyurappa has said that no one in Bengaluru and other parts of the state are supporting the Bharat Bandh call by farmers. Police will take proper action on breaking the law, he added.

All India Lawyers’ Union protests at Tis Hazari District Court, in support of #BharatBandh. Tis Hazarai Court Bar Association said the laws enforced by the government are neither in favour of farmers nor of lawyers. Legal fraternity stands with farmers, it added.

Aam Aadmi Party workers have been detained by Uttar Pradesh police from Shahjahanpur while protesting in support of the farmers.

Political parties and various organisations in Karnataka protested in front of Town Hall in Bengaluru in support of #BharatBandh. The protesters carried vegetables as a mark of protest and rode a cart pulled by cattle, ANI reported.

Political parties including Congress march on the streets of Puducherry, in support of #BharatBandh called by farmer unions against the Central Government’s #FarmLaws

Bank, shops and petrol pumps in Punjab’s Ludhiana are closed in view of #BharatBandh. People say the government can either scrap the contentious farm acts or the struggle continues.

Delhi Deputy CM Manish Sisodia has hit out at the BJP for putting chief minister Arvind Kejriwal under house arrest. He said the party is scared that Kejriwal will take to streets in support of the protesting farmers. He added that Delhi CM’s house has been barricaded and no one is being allowed to either enter or exit his residence.

NCP chief Sharad Panwar has said that 5-6 people from different political parties are going to discuss and take collective stand on the issue of farmers tomorrow. The parties will present their collective stand before the president tomorrow at 5 pm, ANI reported.

K Balakrishnan, CPM state secretary has said that they are supporting farmers who called for the nationwide strike. He said the party is not just fighting Modi government, but Edappadi as well. The people who are supporting these laws will learn a lesson in the upcoming elections, he added.

Members and supporters of the Congress and the AAP are protesting at the ITO, while taking part in the #Bharatbandh protest.

Amid the Bharat Bandh protest, shops in Maharashtra’s Matunga area of Mumbai were seen open and regular traffic movement was also observed.

Union Minister Mukhtar Abbas Naqvi has said misleading people is the opposition’s old tactic. During their rule, the Congress, the NCP, the Akali Dal and other left parties have openly supported these types of bills.

TRS leaders K Kavitha, KT Rama Rao and others, along with party workers, protest in Ranga Reddy in support of #BharatBandh

Telangana minister comes out in support of #BharatBandh today on bullock carts as the Bandh also means the right optics for political protestors.

In support of the Bharat Bandh- a peaceful nationwide protest called by framers protesting against the Centre’s farm laws, all market committees of Maharashtra have decided to suspend trade on December 8. APMC’s across the state wore a deserted look as trade remained suspended.

Police have detained the Congress supporters who were burning tyres near Fategunj post office in support of Bharat Bandh.

Farmers in Tumakuru district held a protest demanding the three contentious farm laws to be repealed by the Centre and the state. The state government has amended Karnataka Land Revenue Act, 1961, and Karnataka APMC Act, 1966.

Subhash Talekdar, president, Mumbai Dabbawala Association has voiced its support for the Bandh saying the farm laws brought by the Centre will finish the farmers of the country.

The Delhi-Meerut highway has been blocked amid Bharat bandh call by farmers protesting the farm laws in national capital.

Meanwhile, just a few minutes ahead of the strike, Aam Aadmi Party claimed Delhi Police has put CM Arvind Kejriwal under house arrest ever since he visited farmers at Singhu Border yesterday.

The Bharat Bandh called by the protesting farmers has begun. The strike is likely to affect transport services, offices and shops, fruits and vegetables supplies’ in some states and cities.

Farmers are expected to block highways but they have again and again emphasised that this is a peaceful protest. The peaceful nationwide shutdown is meant to mount pressure on the government to repeal three contentious farm laws. Farmers have urged people to extend their support peacefully and said their protest was not meant to cause problems for common man. and shops, fruits and vegetables supplies’ in some states and cities. Police in Delhi and Haryana have issued advisories to re-route traffic wherever possible and warn commuters of delays.

Several opposition parties, including the Congress, the DMK, the SP, the BSP, the TRS and the ruling Aam Aadmi Party in Delhi, have extended their support for the bandh and said their workers will participate.