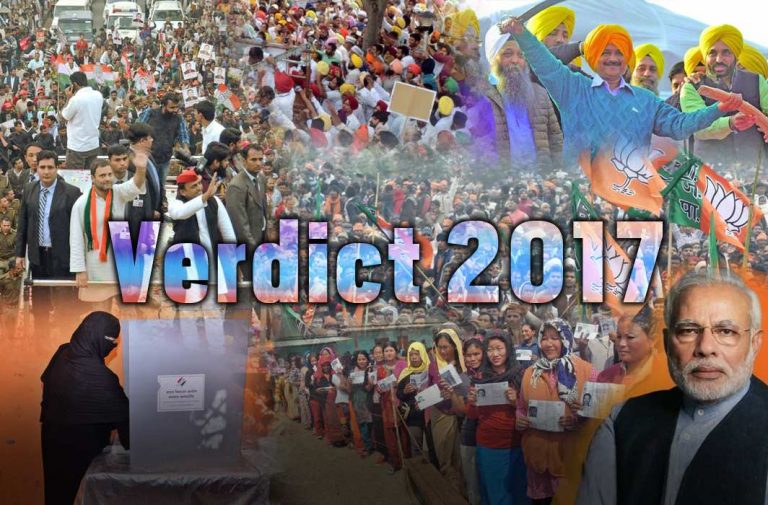 The BJP wave grew into a tsunami and threw all calculations awry. Once considered a small challenger, the saffron party emerged the biggest victor on March 11, crossing the 300 mark in the total 403-member UP assembly. The Samajwadi Party was kept within the 50 mark, while their party in alliance, the Congress, could not even manage to reach double digits.

The Bahujan Samaj Party (BSP) was bewildered, having won 19 seats.

The Aam Aadmi Party (AAP) has failed to find favour with the electorate. It has struggled to find a footing in both Punjab and Goa, where it pushed into, with huge preparations and it certainly failed to become a logical alternative to the BJP except in the urban area of Delhi. It is time for Arvind Kejriwal to introspect and find a reason why it failed at the grassroots.

The Manipur verdict is moving down a path nobody expected it to take. Irom Sharmila’s defeat was a wakeup call, and by the time things started getting less ambiguous, the BJP had crept up into a position where it would not need a helping hand from rebel MLAs.

In Uttar Pradesh, as BJP striding crossed the 300 mark, the results of the infighting of the Samajwadi Party are showing up. Shivpal Yadav, who was removed just before the elections, appeared in victory mode, cheering and saying:  “Sabhi logon ko badhai.” Earlier, he had tweeted: “Ye ghamand ke haar hai.”

It was a sad reflection of the way things are, and Mulayam Singh Yadav, yet to make a comment, would not be happy with the way things were handled in a complex state by his son Akhilesh. Shivpal’s comments hit right into the heart of the party.

Congress comes in next, not in numbers, but in accountability. How would Rahul Gandhi explain to the SP their demand for 100 seats and how his party has handled it? Interestingly, Akhilesh wants the alliance to continue.

Mayawati’s party has virtually been washed away. She has claimed that the EVMs had been tampered with; she said she wants to go to court, start a movement. All in vain; because the verdicts have been overwhelming.

In Uttarakhand, all early drama was washed away with Chief Minister Harish Rawat losing both seats he contested. He has resigned.

Here are the basics of each state, with some special quotes.

The colour of Holi this year is just one: saffron. So it seems as the Uttar Pradesh results started coming in. All exit polls, as usual, were proved wrong in this state, with the BJP at last reading, having won 304 and leading in eight seats.

Rahul  Gandhi: “I congratulate Shri Narendra Modi and the BJP on their victory in Uttar Pradesh & Uttarakhand.”

Surendra Rajput, Congress spokesperson:  “It’s Modi’s win and congrats to him for that. But we expect that he will fulfill the promises that he has made, not indulge in jumlas. We do alliances for something constructive. It’s up to the voter to give a stamp of approval on it.”

Anila Singh, BJP spokesperson: “The way corruption has become rampant. It’s important to open files to set example. This was our promise. To give them a transparent government.”

MoS Jitendra Singh: “Voters of India have risen above caste, religion and other factors. People have reposed their faith in Modi. It is a new India. The message is at multiple levels.”

Deepak Mishra, SP spokesperson: “Every time SP has lost, it has introspected, worked on its shortcomings and emerged stronger next time.”

Mohsin Raza: “Congress had given them (Muslims) topi and madarsa. We are giving them Quran in one hand, laptop in another.”

Congress still the major force against it.

The final tally of seats in all the five states: