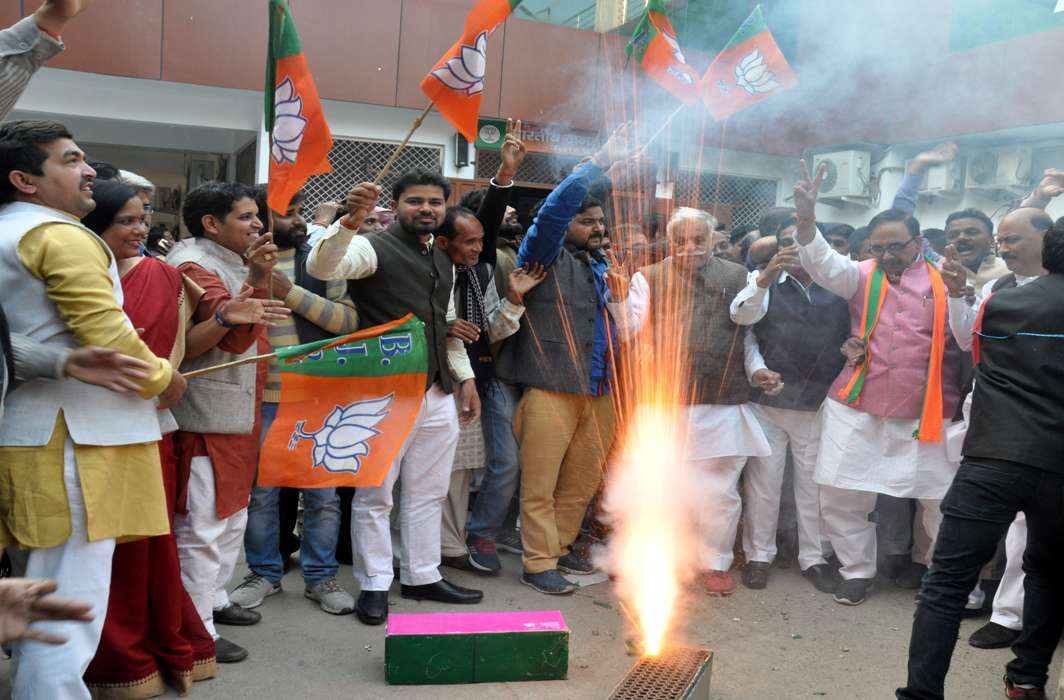 Above: BJP workers celebrating the landslide victory of the party in civic polls, at the party office in Lucknow/Photo: UNI

In the noise about BJP ‘sweeping’ the Uttar Pradesh civic body elections on Friday, some aspects got overlooked in the initial reports. Elections to local bodies seldom evoke such interest, but since the UP chief minister Yogi Adityanath and the party leadership right up to Prime Minister Narendra Modi attached such significance to them, a relook at the polls would be in order.

The first is about the questions raised about the genuineness of the results: the issue of electronic voting machines (EVMs) and whether they had been tampered with. While this issue has been raised by BSP supremo Mayawati as well, her complaint cannot be dismissed simply as case of sour grapes.

Mayawati has challenged the BJP and said her party would sweep the 2019 Lok Sabha polls if voting is done on ballot papers. “If BJP is honest and believes in democracy then discard EVMs and conduct voting on ballot papers. General Elections are due in 2019. If BJP believes people are with them, they must implement it. I can guarantee if pallot papers are used, BJP won’t come to power,” the BSP chief told mediapersons on Saturday.

She is not alone and such complaints have not been raised only by persons with political affiliations. A friend from Lucknow also said he voted Congress but it went to BJP. “Same thing happened to votes cast by others in the family,” he added.

He said the EVMs had no VVPAT (Voter Verifiable Paper Audit Trail) facility, although he had doubts about that, too. “It is only a matter of programming. The paper trail can be programmed to print the correct vote while the vote registered electronically can be different,” he said.

Besides, he pointed out, there were reports that the paper trail from EVMs in Himachal Pradesh Assembly elections was such that the print tended to fade away after some days. That would render a recount later infructuous.

A report in thewire.in said the BJP won the Ayodhya Municipal Corporation seat where polling was conducted through EVM machines, but it suffered heavy losses in rural and semi urban seats where elections were conducted via ballot papers.

In seven districts adjoining Ayodhya, most BJP candidates lost the local elections, the report said. Out of 33 municipal board seats in rural and semi-urban areas of Faizabad, Ambedkar Nagar, Basti, Gonda, Balrampur,  Bahraich and Sultanpur districts of eastern Uttar Pradesh, the BJP won only 6 seats. The Samajwadi Party managed to win 12 seats, the BSP 5 seats, the Congress 3 seats while independents won 7 seats.

In Faizabad, Bahraich and Balrampur districts, the BJP could not manage to open its account.

“The popularity of the BJP government … could not help the party’s candidates in the rural and semi urban seats of Faizabad despite the presence of BJP MLAs from in those areas,” said the report.

In fact, APN had reported complaints about malfunctioning of EVMs from several places in the very first phase of polls on November 22. There were also complaints about entire localities missing from the voters’ list.

Complaints about such rigging part, there are certain aspects about the results that missed the eye. The easy, quick look figure was BJP winning 14 out of 16 mayor posts – in a four-way contest. Other statistics are not so rosy for the party:

True, the BJP was ahead of all its rivals: