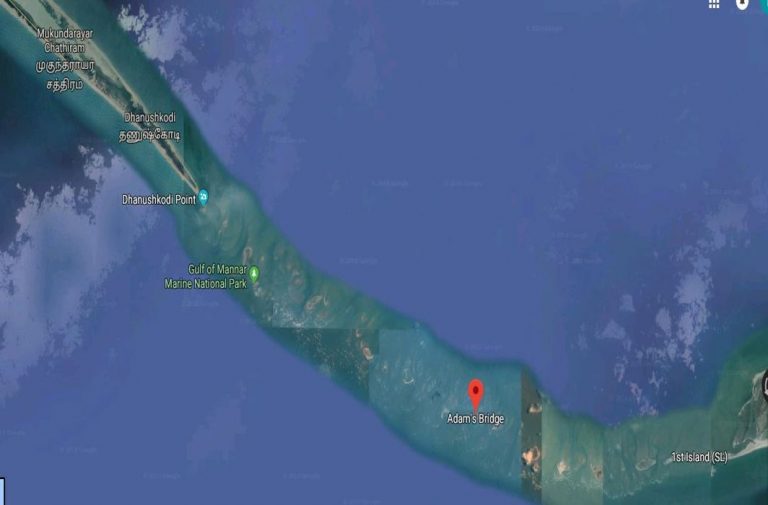 In an affidavit, Centre informs Supreme Court that the 50-km-long Ram Setu between India and Sri Lanka will not be touched while constructing the shipping canal project

The Centre has reportedly informed the Supreme Court, through an affidavit, that it will explore the possibility of a new alignment for the controversial Setusamudram shipping canal project in a bid to ensure that the Ram Setu, the 50-km-long the chain of limestone shoals between India and Sri Lanka which holds religious significance for Hindus, is not touched.

The affidavit has been filed by the Centre is response to a petition filed by BJP leader Subramanian Swamy with the Supreme Court in 2006 which had raised a slew of objections against the Setusamudram project.

Stating that the Ram Setu, also called as the Adam’s Bridge, will not be affected “in the interest of the nation”, the affidavit filed on behalf of the Centre’s ministry of shipping, says: “the government of India intends to explore an alternative to the earlier alignment of Setusamudram Ship Channel project without affecting/damaging the Adam’s Bridge/Ram Setu”.

On Friday, (March 16), Additional Solicitor General Pinky Anand told the bench headed by Chief Justice Dipak Misra that the centre has filed the response (its affidavit) in pursuance of the earlier directions given by the Supreme Court and that the petition filed by Swamy can now be disposed off.

The affidavit was filed on March 13 by Anant Kishore Saran, director of the ministry of shipping.

In November, during proceedings in the petition filed by Swamy, the Supreme Court had asked the centre to clarify whether it wants to remove the Ram Setu, connecting the Rameswaram Island in Tamil Nadu with Mannar Island in Sri Lanka, or protect it. Swamy had later told the media that he would “get the Namo [Narendra Modi] government” to tell the court that it would not touch the Ram Setu and instead give the structure a national heritage status.

According to Hindu mythology and the epic Ramayana, Ram Setu is the bridge that was built by an army of monkeys (the vanara sena) to help Lord Rama and his warriors cross over to Lanka to rescue Sita from the demon king Ravana.

In 2005, during the first term of Prime Minister Dr Manmohan Singh-led UPA regime, a massive controversy had broken out when the government proposed the Setusamudram shipping canal project. The project required dredging in the region that the Ram Setu passes through. Predictably, several right-wing Hindu groups, the RSS and its progeny the BJP, had come out in protest against the proposed canal project, arguing that the Congress-led government wanted to destroy an ancient bridge that was built under instruction of Lord Rama and was thus dear to the country’s majority Hindu population.

The project was challenged before the Supreme Court in 2005. In 2007, the Archaeological Survey of India (ASI) filed an affidavit before the top court asserting that Lord Ram was a mythical character and that the Ramayana had no historical basis, thereby implying that claims that the Ram Setu was built on instructions of the Hindu God were unsubstantiated and had no basis in history. The ASI affidavit had triggered an outrage among the Hindu right, something that the BJP relentlessly used to attack the then Congress-led ruling coalition and also disrupt parliamentary proceedings.

Under pressure from the BJP-led Opposition, the UPA government was later forced to withdraw the affidavit filed by the ASI.

Recently the Cabinet Committee on Political Affairs, which has representatives from key NDA constituents, discussed the future of the Setusamudram project. The meeting, chaired by Prime Minister Narendra Modi, discussed various aspects related to the project which envisages dredging a channel across the Palk Strait to provide a shorter navigational route from the east and west coasts of India instead of circumventing Sri Lanka.