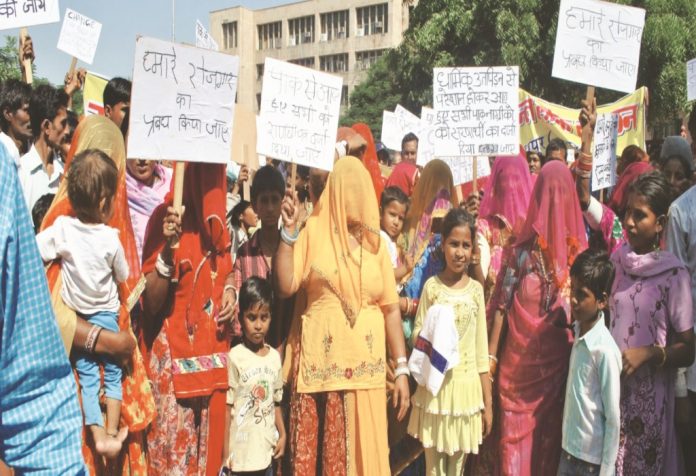 After life became unbearable in Mirpur Khas (Sindh province), Hemji decided it was time to leave the place where he and his ancestors were born. In 2015, he crossed over to India in the hope of finding a haven, where he and his family could have a secure and respectful life. A male nurse at a private clinic in Mirpur Khas, Hemji now lives in Anganva Basti in Jodhpur, along with 250 migrant Hindu families from Pakistan. Though living here may have saved Hemji from everyday abuse and harassment, it is a daily struggle. Without proper documents, finding meaningful employ­ment and proper education for his children has become an ordeal.

Hemji is not alone in this precarious situation. More than 50,000 Pakistani Hindus are living in Barmer, Jaisalmer and Jodhpur, districts bordering Pakistan. They have been on long-term vis­as in the hope that one day they will get Indian citizenship and full rights to live in their new homeland like other Indians.

The arrival of persecuted Pakistani Hindus is not a new phenomenon. Hindu Singh Sodha, president of the Seemant Lok Sangathan, which has been working for the rehabilitation of refugees from Pakistan, told India Legal: “About 10,000 people came in 1965 and another 90,000 in 1971. After this, the Rajasthan border was fenced. Then another 45,000 entered through valid visas. If you take into account the rate of natural growth of 1.45 lakh people, this has today expanded to five lakh.”

Soda said granting citizenship was a different issue and successive governments had done so. However, the reality is that the process of granting citizenship is very slow, as under the earlier law, a person had to give proof of residency of 12 years and other supporting documents. One of the biggest hurdles in granting citizenship is the no-objection certificate by intelligence agencies. In December, a camp was organised in Barmer where hundreds of people applied for Indian nationality. But none got it because of objections raised by the intelligence agencies over the documents submitted by them. In Jodhpur, there are 19,000 Pakistani Hindu refugees living in shanty settlements. The Citizenship (Amendment) Act (CAA), which has reduced the residency term from 12 years to six may have brought a glimmer of hope. However, in the fight between the centre and the state over its implementation, these helpless people have been left high and dry. An emotional Hemji told India Legal: “I have been living in Anganva Basti in Jodhpur for more than five years and under CAA, I have one more year to go before I get Indian citizenship.” But Hemji is not sure whether his ordeal will end after a year. “There were people who have been living here for the last 10-20 years; even they haven’t got the papers.”

Hemji said that without papers, it is very difficult to get employment and education for children. The biggest problem is faced by children when they sit for the board examinations. He narrated the instance of a girl, who after passing Class X standard in Pakistan, came to Jodhpur and took admission in a private school. When she applied for the Class XII board examination, she was asked to furnish the eligibility certificate which she didn’t have.

On the centre-state confrontation and Rajasthan passing a resolution against CAA, Sodha said: “It is a law passed by Parliament and notified in the official gazette. Irrespective of which political party is in power, it has to be implemented.”

When reminded that collectors of Jodhpur, Barmer and Jaisalmer had said that they had received no notification, Sodha said after a bill is passed and becomes an act, laws and bylaws are framed for its implementation. “It lays down and defines the procedure and process through which it’s going to be implemented. I am sure all these issues will be sorted out and the notification will reach the district collectors.”

However, Sodha, who on his own helped 22,000 Pakistani Hindu migrants get Indian citizenship, said: “The issue of persecuted Hindus coming from Pakistan should be seen as a humanitarian issue. Apart from daily abuse and persecution, girls above 12 years are kidnapped and forcibly converted. And the tragedy is that many of them have not got Indian citizenship even after 20 years.”

However, Akhil Choudhary, a Rajasthan High Court lawyer and human rights activist, said: “Citizenship for Indians from Pakistan, including Hindus and non-Hindus, was granted according to the constitutional provisions and the Pass-port Act before CAA 2019 came into existence. The CAA is silent on refugees/immigrants who came after December 2014. The Rajasthan legislature has rightly passed a resolution to stop CAA as it discriminates on the basis of religion and arbitrarily chooses only three countries from where persecuted Indians can come to India. This violates the basic structure of the Constitution.”

He said that the CAA violates the guarantee of equality before the law and the right to a life with dignity under Article 21. While it is nobody’s case that a law granting citizenship to refugees must apply to every person in the world, there must be reasonable criteria for selecting a set of refugees to confer this benefit. “The CAA appears to lack such reasonable classification and seems discriminative,” he said.

Nadia Hashimi in her book, When the Moon is Low, which deals with the plight of refugees, writes: “Refugees didn’t just escape a place. They had to escape a thousand memories until they’d put enough time and distance between them and their misery to wake to a better day. Grudges don’t die—people do.”

When will over 50,000 Pakistani Hindus wake up to a better day?