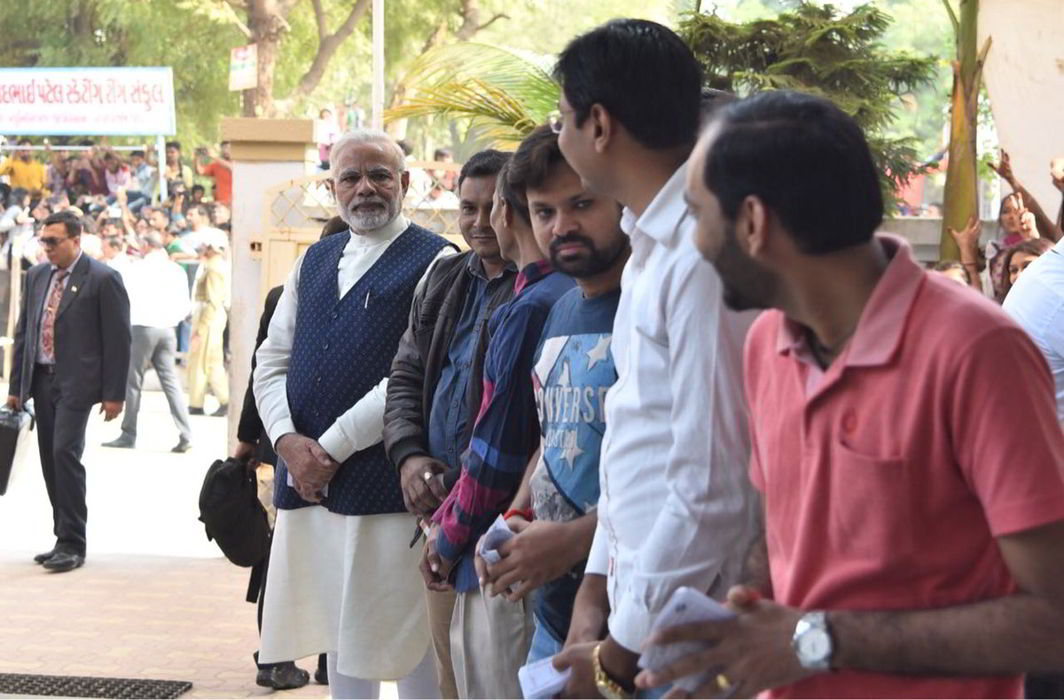 As Gujarat went for the second a final phase of polling on Thursday, the Congress alleged Prime Minister Narendra Modi had violated the Model Code of Conduct by carrying out what it termed a “roadshow” after he cast his vote in Ahmedabad.

Taking to Twitter, Congress leader and former union minister for finance and home, P Chidambaram, claimed the Prime Minister conducted a “full fledged campaign” on the day of polling, and condemned the Election Commission for “sleeping on the job.” In a series of tweets, Chidambaram launched scathing broadside against the poll panel and implored the media to “stand up” to what he dubbed as an “unprecedented violation of the code of conduct”.

Let the media look at the images on the TV screens, search its conscience and reach a conclusion. There has not been a more blatant violation of the code of conduct on polling day.

Taking on from Chidambaram, Congress spokesperson Randeep Singh Surjewala convened a full-fledged media briefing to hit out at the Election Commission, which he accused of “playing puppet” to the Prime Minister. Surjewala said that the EC has “abdicated its constitutional responsibility.”

“A desperate Prime Minister facing defeat in Gujarat holds a roadshow with BJP flags, flagrantly flouts the Constitution and Code of Conduct. A Puppet Election Commission looks on with complicity denigrating its role of an independent Arbiter,” Surjewala said.

Modi went to cast his vote at a polling booth in Rapin area of Ahmedabad around noon. A huge crowd had gathered outside, waiting for his arrival.

As Modi came out after casting his vote, instead of going straight to his car, as all other VIP voters had done through the day, the PM chose to walk on the road. He walked for a few kilometres as he turned this into a mini-roadshow, waving to cheering supporters and flashed the indelible ink mark on his finger for the cameras, reported News18. He then got into his car and left the area.

Cast my vote for the 2017 Gujarat polls. pic.twitter.com/mXd9GTRvtb

The Congress, which has been seething over a showcause notice issued by the poll panel on Wednesday to party’s president-elect Rahul Gandhi over interviews he gave to TV news channels (orders to register FIRs for poll code violation have been issued against the channels), was left wondering why the EC was silent on Modi’s “roadshow” on the day polling was underway.

Chidambaram tweeted: “Allowing a roadshow of PM on voting day is a gross violation of code of conduct. It is an election campaign. What is the EC doing?”

AICC Gujarat in-charge Ashok Gehlot, addressing a press conference in Delhi, said, “When the Prime Minister holds a roadshow in Gujarat after voting, what lessons will the country draw from this? The rules and laws are being openly flouted in Gujarat and the whole country is watching this.”

“EC’s conspiratorial silence and absolute inaction reflects as to how one more independent institution in our polity has become a puppet at the whims and fancy of the BJP. The double standard of Election Commission can be gauged by the fact that while it registers an FIR against news channels and news papers for holding an interview of the Congress President at New Delhi; it gives a free licence to BJP and Narendra Modi to violate the law, the Constitution and Code of Conduct as it meekly surrenders itself and prostrates before the Prime Minister and the ruling party,” Surjewala said.

Chief Election Commissioner (CEC) AK Joti, who had come under intense fire even before the election was announced for delaying the declaration of the Gujarat poll schedule, came under direct attack from the Congress once again.

“The CEC may have been the former personal secretary to the current Prime Minister, he may have served as an official in the state of Gujarat, but as CEC we expected him to discharge his duty neutrally. The EC has become a puppet of the BJP. We urge the EC to uphold the Constitution and not act as a subservient wing of the BJP,” the Congress media cell chief said.

Surjewala also questioned the poll panel and its chief said for turning a “blind eye towards Amit Shah’s press conference on Wednesday at a public place like the Ahmedabad airport.” The Congress leader added: “The Chief Election Commissioner, Achal Kumar Joti, continues to act like Modi’s personal secretary, despite him holding a Constitutional post.”

The EC’s action against newchannels and Gandhi followed a complaint filed by BJP which, apart from seeking action against Gandhi, also sought cancellation of license of the local media channels which aired Gandhi’s interview. It named four media channels namely ABP Asmita Gujarati, VTV, GSTV and Zee 24hrs. Although Gujarat CEO BB Swain told The Indian Express that FIRs will be lodged against five newschannels, he did not name them.

Reacting to the EC order, Shreyans Shah, owner of the Gujarat Samachar group that operates GSTV television said, “The interview run by GSTV was about the induction of Rahul Gandhi as the Congress president. It does not have anything to do with Gujarat elections. We have neither mentioned Gujarat elections, or talked about the candidates contesting polls, so we are not on the wrong-side. In fact on December 9 (during Phase-I) we have carried interviews of BJP candidates. We have followed the same pattern.” Shah said that such “old rules” in age of social-media are “not desirable.”

Meanwhile, the second and final phase of the Gujarat elections concluded on Thursday (Thursday, Dec 14) evening. The second phase of polling had witnessed a voter turnout of 62.24 per cent till 4 pm with another hour to go before the end of the polling process. The votes will be counted on December 18 and decision for the election, along with the one held for the Himachal Pradesh Assembly on November 9, will be declared on the same day.