Death penalty in India isn’t rare. This piece of statistic came to light during debates over Afzal Guru’s hanging on February 9, 2013. It was surprising not for the number of people hanged to death by the state in Independent India, but for the total opacity surrounding the data of this crucial event in law enforcement.

What came out was that the Republic of India had shown scant regard for keeping such important statistics, as the British did while executing Indians.

If one is wondering how capital punishment, the harshest punishment that the legal system in India can hand out to a person, isn’t even properly enumerated and recorded, then one has a measure of the lack of clarity within the records section of the legal system.

In its foreword, the report says: “Accessing accurate and updated statistics on the use of the death penalty in India is an enormous challenge. It is almost impossible to state with any kind of certainty the number of death sentences handed out in any given year or even know the exact number of prisoners under the sentence of death at any given point.”

In the 21st Century that should come as a shock. But this had come to light in researches during Guru’s death penalty.

Why aren’t there proper records? The report states: “Lack of updated records,ineffective data reporting and management practices, barriers to accessing official data that should be in the public domain are some of the reasons that have contributed to this situation.”

So, in 21st Century India, information on this is available through ancient means. Says the report: “We have relied on a variety of sources to put together this information – monitoring judgments, official data provided by some prison departments in state capitals, information received from some High Courts, RTI applications and newspaper reports.”

That is a great and ambitious work.

The data revealed has also come as a surprise. For example, there are 397 prisoners now on death row, of which 136 have been sentenced by Sessions Courts. 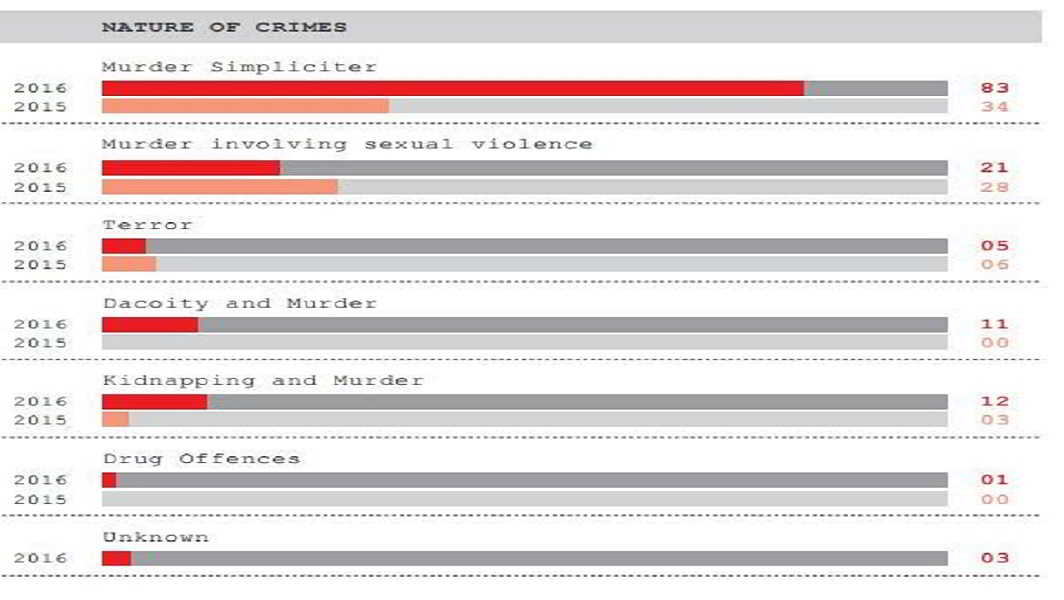 Similarly, though, against the six confirmations of death sentences in 2015, the high courts confirmed 15 in 2016. Acquittals grew from three to 14. The last, though, should not come up as a trend, because acquittals are very case specific.

Further analysis of the death penalties handed out reveal more interesting facts. Cases of Murder Simpliciter, or simple murder rose massively from 34 to 83 (2015 vs 2016), while murders involving sexual violence actually fell from 28 to 21.

The report also provides several other data that would be interesting not only to a law student/researcher, but also provides information to the general public.

It is sad that such information isn’t available in the public domain.

The Delhi High Court on Tuesday will hear a plea seeking a direction to the National Crime Records Bureau (NCRB), to recognise and classify Transgenders as a separate third gender in their Annual Publication of Prison Statistics India.
Read more