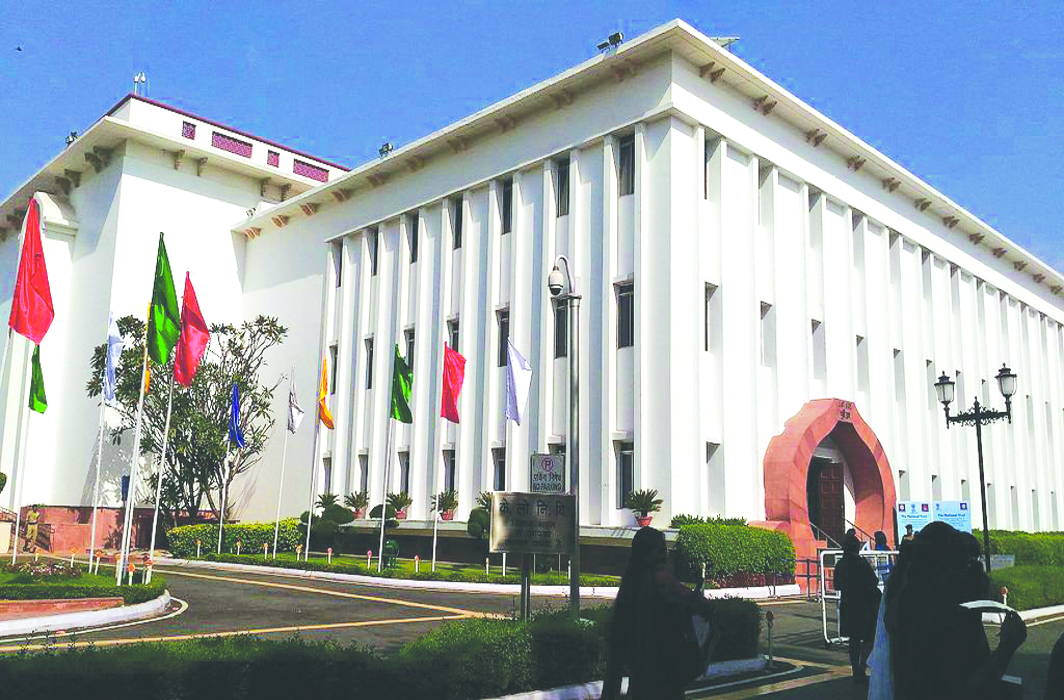 Some official venues in the capital are reserved strictly for high-profile government functions. These include Vigyan Bhawan and Ambedkar Bhawan, two of the most popular. In the space of barely two weeks, the BJP-led government has decreed that there is no difference between party and government as far as the use of these venues is concerned. First, the BJP held its national party meet headed by Prime Minister Narendra Modi and party chief Amit Shah at Ambedkar Bhawan where it discussed a roadmap for the 2019 Lok Sabha elections and upcoming assembly elections. The two-day meet was attended by its key leaders from all states and Union Territories besides its national leadership. The irony was not lost—a building dedicated to a Scheduled Caste icon at a time when the BJP is attempting a Scheduled Caste outreach. However, the moot point is the use of a government property meant strictly for official meetings for a brainstorming session by the party. Next week, the BJP’s parent organisation, the RSS, will hold its lecture series at Vigyan Bhawan, again, strictly meant for government use. Vigyan Bhawan is allotted for departmental, national or international conferences/seminars by the government of India, state governments, PSUs and autonomous bodies in that order. There is an allotment clause, rarely used, which allows private bodies and NGOs to use the premises but only for the days “President, the Vice-President or the Prime Minister graces the function”. This is more to do with security reasons. Giving permission to a political party is rare. The housing and urban affairs minister merely has discretionary powers to waive the licence fee, but not allot the venues for private or party-related events. Incidentally, Vigyan Bhawan had already been booked by the Tourism Ministry for a prestigious international trade mart where over 200 foreign companies were to participate. The Centre asked them to shift to Asoka Hotel at the last minute in order to accomodate the RSS event.

The daggers seem to be out for Finance Minister Arun Jaitley who has just rejoined work after his kidney transplant. The bombshell in the form of fugitive Vijay Mallya’s statement that he met Jaitley just before he went abroad and spoke to him about paying back his dues to the banks, is a political setback for Jaitley, despite his insistence that there was no formal meeting and he was accosted by Mallya in the Rajya Sabha. Mallya has spoken to the media after each of his hearings in the Magistrate’s Court in London but this is the first time he has mentioned the meeting. Sources now say Mallya was instigated to do so by a call from New Delhi, from a minister in the Modi government who has been at loggerheads with Jaitley. For Mallya to take on the finance minister from London is a risky proposition in the light of his extradition hearings but the sources say that it is clear that ministerial rivalry is behind Mallya’s latest outburst and Jaitley’s rivals are using Mallya’s shoulder to fire the gun.

In MP and Chhattisgarh, the Congress has been out of power for the past 15 years while in Rajasthan it was routed in the last assembly polls. As such, anyone approaching Congress leaders with a request to be inducted into the ranks in these states which are due for polls should be seen as a sign of buoyancy. To this extent, the Congress is upbeat as in the past few months, sources say, it has received feelers from various leaders of its arch rival, the BJP. Besides established leaders, the Congress is receiving requests from former bureaucrats too. Recently, retired IAS officers Serjius Minj and RPS Tyagi officially joined the Congress in Chhattisgarh. Sources say both these ex-babus are likely to be fielded as the party’s candidates in the upcoming assembly polls.

However, the decision to induct faces who have limited support among the cadres is causing unease. Sources say Congress chiefs in MP and Rajasthan, Kamal Nath and Sachin Pilot, respectively, have received over a dozen such requests from retired bureaucrats. Each of these requests comes with the tacit, or overt, message of being awarded berths in the upcoming polls.

Old-timers feel that these lateral entrants would curtail their chances of securing nominations as candidates. For Pilot, Nath and their Chhattisgarh counterpart, Bhupesh Baghel, deciding on these potential inductions has become a tightrope walk—accepting them would signal the party’s resurgence but giving them tickets could trigger sabotage of the election by the veterans.

At last week’s meeting of the BJP national executive, both Prime Minister Narendra Modi and party chief Amit Shah waxed eloquent about the party’s future. “If we win 2019, we will be in power for the next 50 years, nobody can remove us,” Shah bragged. Wishful thinking. That’s the reaction, not of the opposition leaders who are hoping to cross the aisles and occupy the treasury benches post the 2019 elections, but the BJP’s own leaders, particularily from the south. Even die-hard optimists do not see it faring as well in the north Indian states as it did in the elections four years ago. With the opposition making moves to put up a joint fight, matters won’t be easy. But worse is its plight in the south that accounts for 129 seats and where, thanks to alliances and tacit understandings with regional outfits, the party had picked up a few seats in the past. Karnataka remained the exception where it won 13 seats on its own. In Andhra and Telangana it got three seats, thanks to the alliance with the Telugu Desam but with N Chandrababu Naidu distancing himself from the BJP, the future looks bleak. In Kerala, the party has never won a seat and the trend is not going to be reversed now. In Tamil Nadu, its lone MP owes his victory to Jayalalithaa’s munificence. With her gone, the BJP is now eyeing MK Stalin. But M Karunanidhi’s younger son and the recently elected leader of the DMK shows a total lack of interest. Among those who met him on the PM’s behalf for an alliance was Vice-President M Venkaiah Naidu. Seldom are VPs turned down but Venkaiah Naidu was.

Prime Minister Narendra Modi and BJP President Amit Shah sounded the bugle for the Lok Sabha polls while addressing the party’s National Executive meet in New Delhi, replacing their unfulfilled promise of “Acche Din Aayenge” with a jingoistic “Ajay Bharat, Atal Bharat”. However, as the party goes into poll mode, indications are that several veterans have begun flexing muscles with the high command. The BJP’s Modi era has, since May 2014, seen systematic sidelining of the party’s warhorses. Atal Bihari Vajpa­yee, who in his death has given the party a poll slogan, was rarely invoked. LK Advani, once the party’s Loh Purush is a sorry caricature of himself. Murli Manohar Joshi has been forced into reclusion. Yashwant Sinha has quit and, along with Arun Shourie, never misses an opportunity to criticise the Modi regime. These were all frontline leaders of yore.

Satraps from the states are now sounding discordant notes. Former Uttarakhand chief ministers BS Koshiyari and BC Khanduri have, say sources, refused to work for the party in the polls. Former CM Vijay Bahuguna (centre) who had quit the Congress and facilitated its rout in Uttarakhand after joining the BJP, has been unhappy since he was denied a Rajya Sabha berth earlier this year. In Himachal Pradesh, veterans Shanta Kumar and PK Dhumal (left) have begun acting truant. Similarly, former Union minister Kalraj Mishra (right) has been sulking in Uttar Pradesh while Modi’s decision to consistently boost Union I&B minister Rajyavardhan Rathore’s political profile has left Rajasthan Chief Minister Vasundhara Raje miffed. Koshiyari, Mishra, Kumar and Dhumal have indicated to Shah that sending emissaries to pacify them might prove counter-productive.

The attacks on the BJP involving the Rafale deal and the secrecy surrounding it are starting to hit home despite firefighters like Finance Minister Arun Jaitley and Defence Minister Nirmala Sitharaman to defend the price tag. With the Rafale deal emerging as the key issue for Opposition parties in the Lok Sabha elections, the government has embarked on a PR exercise to counter the accusations by getting serving and retired Air Force officers to defend the deal and its operational requirement. The current Air Force chief, BS Dhanoa, spoke to the press about the “grave threat to India” and why the Rafale will enhance the IAF’s combat capabilities. Since then, two other senior IAF officials, including its Vice-Chief, Air Marshal SB Deo, have publicly defended the Rafale deal, claiming its critics didn’t have information to understand the details. The sudden rush of top Air Force officers springing to the Rafale deal’s defence is an indication that using technical and operational jargon to justify the purchase may work better than ministerial interventions.