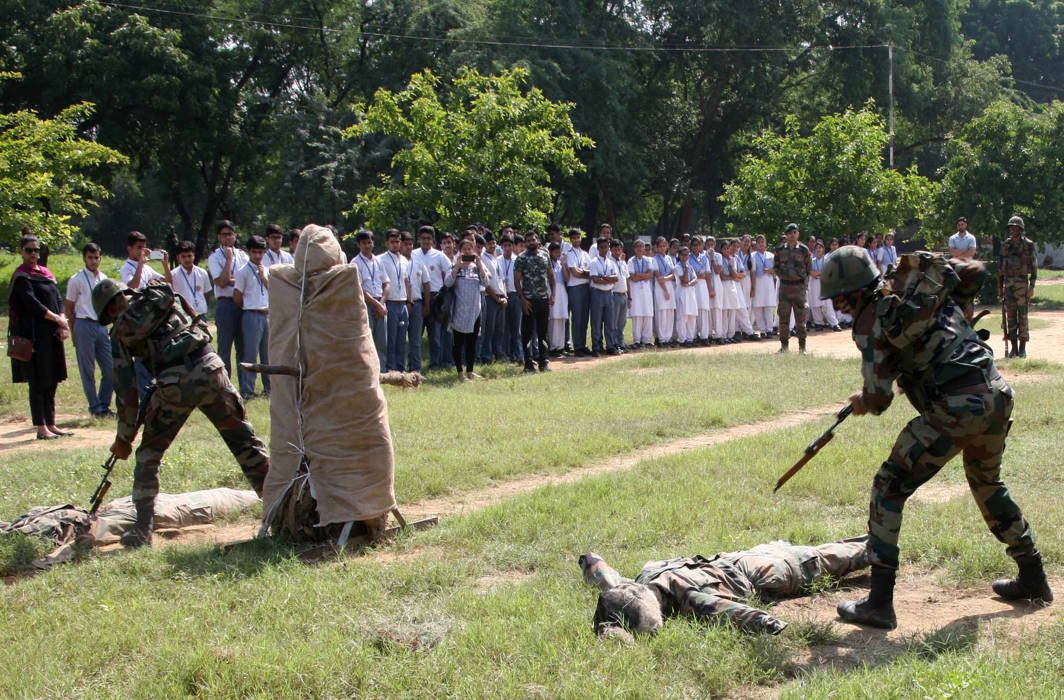 When in doubt, attack Pakistan. The BJP, faced with rising anger from farmers, the unemployed and other sections, has adoped that fail-safe strategy for the upcoming elections in key states and the Big One next May. Attacking Pakistan, verbally and otherwise, now lies at the core of its campaign. The decision to celebrate Surgical Strike Day in 51 cities set the stage, preceded by “leaked” videos of the Army action. Prime Minister Modi added fuel to the fire during his latest Mann ki Baat when he said: “It is decided that our soldiers will give a befitting reply to all those who try to disturb India’s peace and prosperity.” Home Minister Rajnath Singh hinted at another cross- border strike following the killing of a BSF jawan in firing from across the LoC when he said: “Something big has happened and you will also see what happens in future.” The army is also on board with its chief, General Bipin Rawat, declaring that another surgical strike was called for, while External Affairs Minister Sushma Swaraj’s anti-Pakistan diatribe at the UN was seen as a warning to the international community that India is prepared to act militarily against Pakistan-sponsored terror. Not since the Bangladesh War has the political leadership used the army as a propaganda tool.

There has been much criticism of the photo/video which showed a dead terrorist being dragged along a tarred road in Kashmir by a chain tied to his ankles. In Kashmir and elsewhere, the Indian army came under fire for so-called human rights violations.

While the army has not reacted to the accusations, unlike the case of Major Gogoi and the man tied to his jeep, sources in Srinagar say that in any combing operation in the Valley, chains and ropes are standard equipment along with firepower and technical aids.

The reason, they say, is that terrorists who are fired upon and greviously wounded, are instructed by their Pakistan handlers to lie on their stomachs and activate booby traps sewn into their clothes which explode as soon as they are turned over for identification, killing Indian army soldiers within range (civilians are kept out of encounter sites).

To counter this, whenever a terrorist is killed and found lying on his stomach, ropes or chains are hooked to his feet and he is turned over from a distance to avoid any booby trap casualties. Once that is done, the chains/ropes are removed and the body covered with a white shroud. The only question to be asked is who shot the photo/video and released it on social media?

While the BJP’s top brass gives the outward signs of being united and speaking with one voice, internally a battle is raging with snide attacks and insinuations gaining in frequency, mostly directed at three senior ministers—Finance Minister Arun Jaitley, External Affairs Minister Sushma Swaraj, and Home Minister Rajnath Singh.

While Swaraj is seen as a soft target and disliked for her extending a helping hand to anyone with a problem involving her ministry, including minorities, Jaitley is seen as the fount of all the anger directed at the party and government which are mostly to do with economic woes: joblessness, demonetisation, GST, and rising cost of living, which includes fuel prices. His open critic, the BJP’s Rajya Sabha MP, Subramanian Swamy, has sharpened his attack on Jaitley with a tweet 10 days ago asking: “Who provoked the french fmr president who signed rafael deal to blurt out about anil ambani? the politician who planted in ie the story about film making by a french cine star. This was to hurt namo. Who is the planter? Who else?” A day later, he tweeted another cryptic message about the CBI director which was clearly aimed at Rajnath Singh. Such attacks by its own MPs are highly embarrassing for the ruling party but, intriguingly, neither Narendra Modi nor Amit Shah have reacted or intervened, suggesting that the power games in ministerial circles are being encouraged.

In an address to volunteers for the BJP’s social media cell in Kota, party President Amit Shah revealed the party’s plans to counter any negative news in the press. He declared that leading up to the assembly elections in Rajasthan, Madhya Pradesh and Chhattisgarh, the BJP social media cell in Delhi had created two separate WhatsApp groups with over three million members.

Each morning at 8 am, the cell would send messages to each volunteer’s phone giving details of any newspaper, TV or online report that was unfavourable to the BJP. The volunteer’s job would be to immediately brand it “fake news” and circulate it to all contacts and voters. “Hum jo chaahein woh sandesh janta tak pahuncha saktey hain, chaahe khatta ho ya meetha ho, sacha ho ya jhoota ho. (We are capable of delivering any message we want to the public, whether sweet or sour, true or fake),” he said. He made it clear that social media would be the key to winning the upcoming elections, and urged volunteers to project Narendra Modi as the saviour of the nation. He concluded by saying that cheap smartphones and low internet costs had made social media—Facebook and WhatsApp in particular, potent tools to disseminate pro-BJP messages.

With the Rafale deal occupying so much media space, and BJP supporters jumping to its defence without quite knowing the background, it has led to some embarrassing moments for some heavyweights. Minister of State for External Affairs MJ Akbar (left) was quick to tweet this: “Fact: MoU was signed between Rafale and Reliance on 13 February 2013, when Rahul Gandhi was in power. Another lie peddled by Congress President is exposed.” This was on September 22. As a minister, one would expect Akbar to know that the so-called deal in 2013 was a tentative agreement between Mukesh Ambani’s Reliance Industries when the industrialist was contemplating entering the defence space, only to pull out shortly after. It seems inconceivable that Akbar would mistake the younger brother, Anil, for Mukesh, when the two run different companies—Anil Ambani’s defence venture with Dassault was launched barely a fortnight before the deal for 36 aircraft was signed in Paris. Then we had BJP MP Rajeev Chandrasekhar (centre) following suit by tweeting this: “So @RahulGandhi is ok with #Dassault hvng #Reliance as offset partner under #UPA in 2012 but its a ‘scam’ when same Dassault ties up with #Reliance under #NDA in 2016 ?” He too mixed up the brothers. Then there was RSS ideologue S Gurumurthy (right) who also mixed up the brothers in his tweet. Maybe Anilbhai should serve them a Cease and Desist notice.

Recent opinion polls regarding state elections in Rajasthan show that the BJP led by Chief Minister Vasundhara Raje could be in serious trouble with the Congress gaining considerable ground. Now, Raje, a member of the erstwhile Scindia royal family, could face further embarrassment with the wife of an IPS officer posted in the state daring to announce that she will be contesting the elections and against the chief minister in her Jhalrapatan constituency. Raje has been elected MLA from here since 2003 but now seems on shaky ground. The officer’s wife, Mukul Pankaj Choudhary, who was born in Jhalrapatan, has been going around saying that her husband has been victimised and his postings and promotions stalled because he is an honest officer. The Raje government has already served no less than seven chargesheets against the husband, Pankaj Choudhary, a Rajasthan-cadre IPS officer, on various charges. Raje’s challenger is no political tyro—her mother was a minister in an earlier Congress government. However, she will be contesting as an independent candidate, which might dent her chances against the Rani.