There are secret late-night consultations going on in the capital to find a Prime Ministerial candidate for 2019 who can challenge Narendra Modi from outside the Congress. This group is made up of BJP rebels and their supporters and they have been meeting at the Prithviraj Road residence of businessman and ex-Rajya Sabha MP, Kamal Morarka. The group consists of (above left to right) Yashwant Sinha, Shatrughan Sinha, Arun Shourie, ex-diplomat KC Singh, two senior journalists, and AAP’s Yogendra Yadav. They hope to counter the TINA (There is No Alternative) factor and project Yashwant Sinha as a PM candidate and are looking for supporters. Yadav is sounding out AAP, Singh is in touch with Akalis, Shotgun is targeting Chandrababu Naidu, and Shourie is canvassing BJP politicians who may be willing to switch. 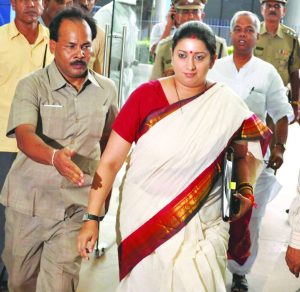 Information and Broadcasting Minister Smriti Irani continues to exert her authority on public broadcasters, Doordarshan and All India Radio in a bid to drag them kicking and screaming into the 21st century. Her latest effort was to summon all senior staffers and ask them how many Twitter followers they each had and how often they used social media to promote their content. Most were novices in social media or had a limited following. Now, she has set targets and deadlines to improve social media output and assigned some junior staffers to monitor this. This means that apart from their own work, including desk editing and rewrites, they now have double the work. 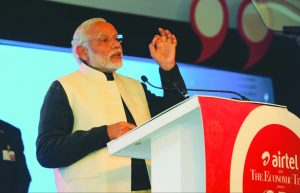 Speaking at two recent high profile events, it is clear that Narendra Modi is in campaign mode for 2019. At both the venues—one a global business summit hosted by The Economic Times and earlier at the annual meeting of the Federation of Indian Chambers of Commerce and Industry—the addresses sounded like campaign speeches. At the ET event, he gave a power point presentation, listing his government’s achievements, including for farmers and the rural populace. He spoke in Hindi. Clearly, the electoral results in Gujarat and Rajasthan, have hastened the start of the BJP’s official campaign for 2019. 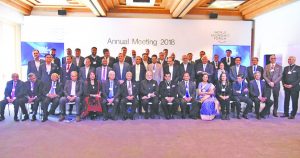 After the controversy broke about Nirav Modi’s presence in a photo shoot for Indian businessmen with PM Modi at Davos, the Ministry of External Affairs put out a statement saying that Nirav Modi was not part of the official delegation and that the group photo with Indian CEOs was “impromptu”.

Modi, according to insiders, has been a member of the World Economic Forum for the last five years, as an “individual” member. Membership for individuals costs Rs 65 lakh approximately while rates for other members—”industry partner” and “strategic partner” is much higher. Just to attend one five-day annual Davos event costs Rs 18 lakh.

CEOs present at the event say the photo shoot was not “impromptu”. They were told in advance and the PM arrived 40 minutes late. The PM arrived with the official delegation—then foreign secretary S Jaishankar and Niti Aayog CEO Amitabh Kant—sat down, the photo was taken, and he got up, turned around for brief eye contact with those behind, and quickly left.

Sometimes translating official documents can provide some hilarity. When the draft of the annual budget 2018 was sent to state governments, the heading given was Holistic Budget. Some clerk in the Orissa publicity department translated it quite literally—as “Pavitra Budget”!