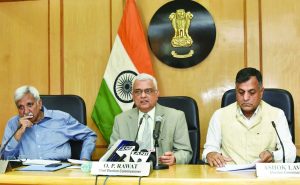 The Election Commission has been left red-faced after some political social media sites and television news channels announced the dates of the Karnataka elections hours before the EC made the announcement. The result was a political storm which has led the EC to now order an inquiry. Surprisingly, the Commission has not asked for the BJP’s social media head, Amit Malviya, who was among the first to tweet the dates, to be questioned. Malviya had tweeted the correct dates of the elections—and then quickly deleted it. Chief Election Commissioner OP Rawat had initially said that action would be taken against Malviya after due investigation, but now it seems he has changed his mind and asked the Congress’s social media in-charge for Karnataka, B Srivatsa, to be questioned instead. The first to flash the dates (at 11.06 am) was Times Now, which is seen as being an appendage of the Modi government. Malviya’s tweet was at 11.08 am. Malviya later said his tweet was based on information broadcast by Times Now. Some Kannada channels had picked up the Times Now flash which led to Srivatsa’s tweet. With the Congress and BJP trading barbs, it does seem odd—even biased—based on the sequence of events, that the EC is summoning Srivatsa and not Malviya. The controversy even led to the Aam Aadmi Party calling the Election Commission a “Khap Panchayat”. 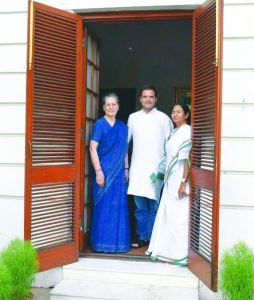 The possibility of an anti-BJP front which will include the Congress to take on the BJP in 2019, is now growing stronger after Mamata Banerjee’s visit to Delhi last week and her meeting with Sonia Gandhi. The meeting almost did not take place since Sonia developed high blood pressure and breathlessness while staying at daughter Priyanka’s home in Shimla. This is the second time Sonia has had to be airlifted for a medical emergency from Shimla and her recovery in Delhi had delayed her meeting with Mamata which took place the next day. The meeting was significant since Mamata made it clear that she would only deal with Sonia in terms of building an anti-BJP front, and said she found it difficult to communicate with Rahul, the Congress president. Sonia has assured her she will be present at the negotiations that take place between the TMC and the Congress, but Rahul must be present as well. 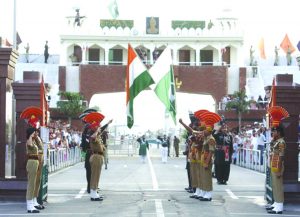 The tit for tat of diplomatic personnel on both sides of the border has taken Indo-Pak relations to a new low. In Islamabad and Delhi, every diplomat from the High Commissioner downwards, is spending sleepless nights because of midnight knocks on the doors—when they open the doors there is no one there—and calls on their mobile phones at 2 am, which go unanswered. When they go out in their cars, they are tailgated by aggressive drivers from intelligence agencies. In Delhi, the farce has gone a step further—the Pakistan High Commission has a long-standing contract with a company which attends to all their problems, from electricity to plumbing, carpentry and house repairs. For two weeks now, he has disappeared, and calls to his mobile go unanswered.

No Defence in Politics

The position of the Defence Ministry spokesperson has changed thanks to social media. The question is whether it has changed under the Modi regime. Instead of daily briefings regarding events related to the armed forces and the defence minister, the spokesperson now tweets. His recent tweets have raised questions about politicisation of the armed forces. The tweet, by spokesperson Rao Rajashekar, a 1997-batch officer of the Indian Defence Accounts Service, was actually a retweet of the BJP’s Karnataka president, BS Yeddyurappa, in which he had thanked Narendra Modi and Amit Shah for their confidence in him! No defence ministry spokesperson has ever ventured into domestic politics, and this was a shock.