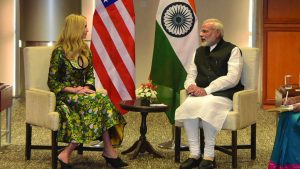 The Indian government seems to have pulled out all stops to ensure that Ivanka Trump’s Hyderabad sojourn was a success and that she goes back with glowing reports for her father. Hyderabad has never looked so clean and welcoming thanks to the massive drive that removed all dogs, stray cows and beggars from the streets leading to the venue, her hotel and the Falaknuma Palace. The government even flew in the Indian ambassador to the US, Navtej Sarna, who has just been given a year’s extension, to greet her on arrival at the airport. Ambassadors are only brought back when a head of state from the country they are posted in, is visiting India. Ivanka’s official position is adviser to the US President who happens to be her dad. The elaborate welcome, the hospitality, the security protocol are all normally given to the head of an important state, and Prime Minister Narendra Modi playing attentive host suggests that the way to the President’s heart may be through his favourite daughter.

Ajeya Singh was the US-educated son of former Prime Minister VP Singh whom the Congress tried to implicate unsuccessfully in the St Kitts scam in the 1990s. But political rivalries, including current ones, were apparently thrown to the winds, seeing all the VIPs who attended the wedding reception of his daughter in Lutyens’ Delhi. Singh, the Raja of Manda, invited over 1,000 people, including Vice-President Venkaiah Naidu (there were some who swore they saw Narendra Modi but no one confirms it though Modi’s top political IAS aide, PK Mishra, was there), Union ministers Rajnath Singh, Arun Jaitley, Vijay Goel, Ram Vilas Paswan, Suresh Prabhu, Piyush Goyal and Dharmendra Pradhan. Other VIPs included former PM Manmohan Singh, Rajiv Shukla, Naresh Gujral, Amar Singh, Sanjay Singh, Pawan Verma, Hardip Puri, Jyotiraditya Scindia, Jitin Prasada, Shashi Tharoor and KTS Tulsi. Foreign bigshots attending were Prime Minister of Sri Lanka Ranil Wickremesinghe and his wife, Maithree, and the Sri Lankan Minister of Law and Justice. It was a feast fit for kings considering that the groom is the son of  BJD Rajya Sabha member AU Singh Deo, erstwhile Maharaja of Bolangir, a friend and Doon School buddy of Odisha CM Naveen Patnaik. The haute cuisine included exotic dishes like goose liver pate, nihari gosht, and duck curry.

The aces in Gujarat’s upcoming election may be Narendra Modi, Rahul Gandhi and Amit Shah but there are three kings who could play a pivotal role in helping the Congress make a dent in the BJP’s citadel. Hardik Patel (left) has galvanised the powerful Patidar community, Alpesh Thakore (centre) is drawing impressive crowds for his OBC bandwagon (the OBCs count for 54 percent of Gujarat’s population) which he has hitched to the Congress while Dalit activist Jignesh Mewani has rallied the community behind his anti-BJP plank. The caste-religion interplay is key to the state’s voting history. The three young next-gen leaders have created a new caste matrix which has replaced old discredited lodestars like the Samajwadi Party and Mayawati’s Bahujan Samaj Party. All three have been attracting large crowds so it will be interesting to see what impact the trio’s combined attacks on the BJP, and their affiliation with the Congress, have on the eventual outcome. 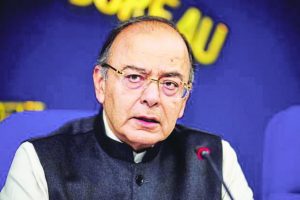 The international arbitration process involving the Vodafone Group’s legal battle against the Indian government for the tax demand of Rs 11,000 crore has taken a curious turn. The NDA government had diluted the earlier rigid stand on the retrospective tax issue to calm global investors. Vodafone had plumped for international arbitration in Holland and then the UK. Now the government has proposed the name of a senior advocate as arbitrator. Prior to 2014, Vodafone was represented by Arun Jaitley wearing his advocate’s gown. Now, as finance minister, he is deciding on the strategy in the government’s legal battle with Vodafone, including the fact that he has a say in the choice of the arbitrator, albeit to be cleared by the PMO.