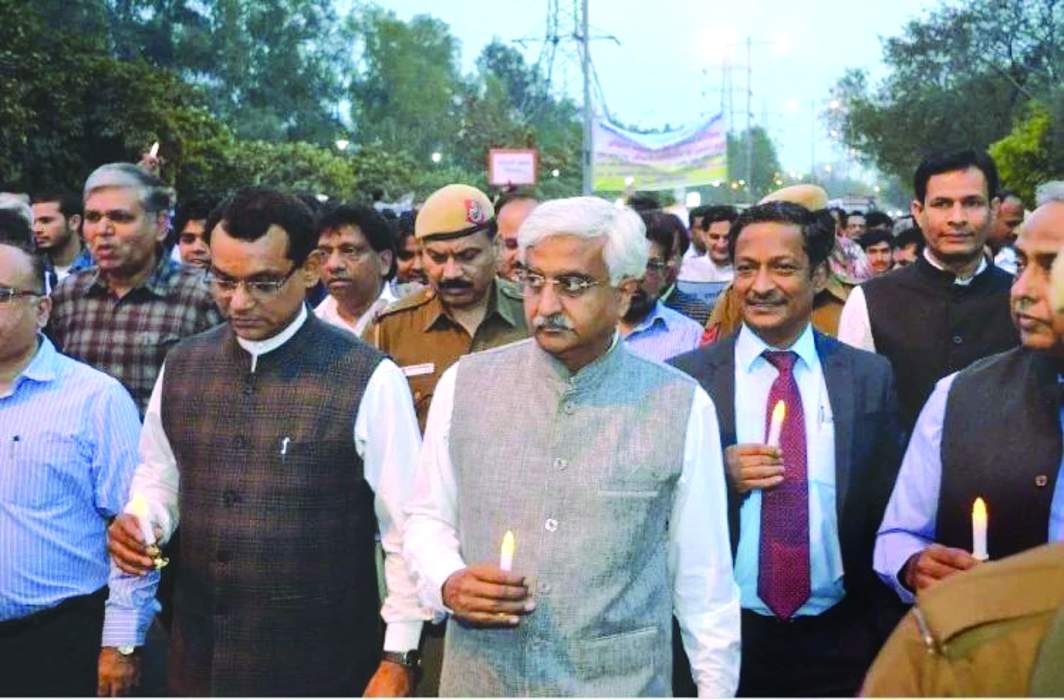 Above: Delhi CS Anshu Prakash (third from right) and other bureaucrats on a candlelight protest march to Rajghat

Delhi Chief Secretary Anshu Prakash, who has claimed that two AAP MLAs had roughed him up when he was in a meeting at the residence of Delhi Chief Minister Arvind Kejriwal on the night of February 19, had moved the Delhi High Court when a Delhi Assembly privilege committee – Questions and Reference Committee – summoned him to appear before it.

The Delhi High Court on Monday (March 5), after hearing Prakash, ruled that the matter pertaining to Prakash is being deferred to April 11. The court also ordered that no coercive action will be taken against him for non-appearance till the next date of hearing.

The committee had sent him summons on March 1 to appear before it on Monday itself, which sent Prakash quickly to court, though the summons was not about the scuffle in the CM’s house.

In his writ petition to the high court Prakash has claimed that he anticipated ‘breach of privilege’ proceedings against him. In his submission to the court he has said that this “amounts to an illegal and unconstitutional attempt to assail the independent functioning of the bureaucracy, a measure beyond the legislative competence of the assembly, merely as a retributive measure to the petitioner taking recourse of the law after being assaulted”.

In his application he has also said that he has been “summoned to appear before the privilege committee for inquiry without being provided any copy of the complaint or opportunity to respond to the same”.

MLA Saurabh Bharadwaj has clarified in the media that this summons had nothing to do with the scuffle and alleged that the “Chief Secretary was trying to divert attention from the Delhi bank fraud involving Rs 100 crore and trying to protect those involved in the scam”. Bharadwaj is a member of the committee.

The March 1 notice sent to Prakash was supposedly following his “failure” to appear before the committee on February 23. Three of the four members of the panel have proposed privilege proceedings against Prakash and two other bureaucrats for skipping the meeting.

The bank in question is Sehkari Bank Limited, a Delhi government-owned cooperative bank. This alleged scam happened for two years from 2013, and was carried out on the basis of “fake documents”.

The case first landed in front of the court’s double bench of Justices G S Sistani and Sangita Dhingra Sehgal, but the bench said that “you should have to move to a single-judge bench. Counsel Siddarth Luthra, appearing for Prakash, submitted that earlier this court heard the matter challenging the privilege notice issued to M M Kutty. The bench observed that matter too should be heard by the single bench.

Hence the case was listed before the court of Justice Rajiv Shakdhar.

Luthra said: “He (Prakash) was called upon before the Question and Reference Committee. They issued a notice saying ‘unsatisfactory reply’.  He had informed the committee that he is not well and cannot attend the meeting, because he was going to a government hospital. Mr (Amanatullah) Khan is the member of the same committee where the complaint generated.” Khan has been placed in police custody,” said the counsel.

The counsel also said: “No opportunity has been provided to the Chief Secretary by the Speaker.”

The bench said: “The Speaker had, in another case in Uttar Pradesh, issued summon to judges. So you have to be careful about the jurisdiction and the power of contempt. That is why we have to be very careful.”

The counsel for the respondents said: “This is just a notice that a meeting will take place, issued by the members of the committee.”

To that the bench asked: “Are you saying there will be no action taken against the Chief Secretary?”

The counsel for the respondents, Senior Advocate Sanjay Hegde, said: “He has been requested to attend.”

The bench then asked: “Having said that if he does not attend will you guarantee that no coercive action will be taken against him?” Then the bench told the Prakash’s counsel: “You can go and carry on with the meeting. It was not a summons.”

Luthra, however, said: “There were 11 persons who assaulted the Chief Secretary. The rest of them yet to be identified and if I (read ‘my client’) attend the meeting and if I meet the same persons, it would be difficult for me. In a 15-minute meeting all of them assaulted me and two were sent to police custody. Nine others are outside, free. If I go today to the meeting it would definitely affect me. If there is a fundamental right involved I have right not to attend. If it is deferred by a week or so on it will be good for me.”

With respondents’ counsel again assuring that “nothing will happen to him”, the bench said that let it be postponed.

The bench also asked: “Is the complaint concerning only the Chief Secretary?”

The respondents’ counsel said: “Why are we going ahead of the game? The instructions I took was that there will be no cause for apprehension.”

To that the petitioners’ counsel said: “You can’t treat officers like this. All I am saying is that put it on hold for more than ten days.”

Thereafter the bench issued notice to respondents to file counter-affidavit and said that till the next date of hearing no action can be taken against Prakash.