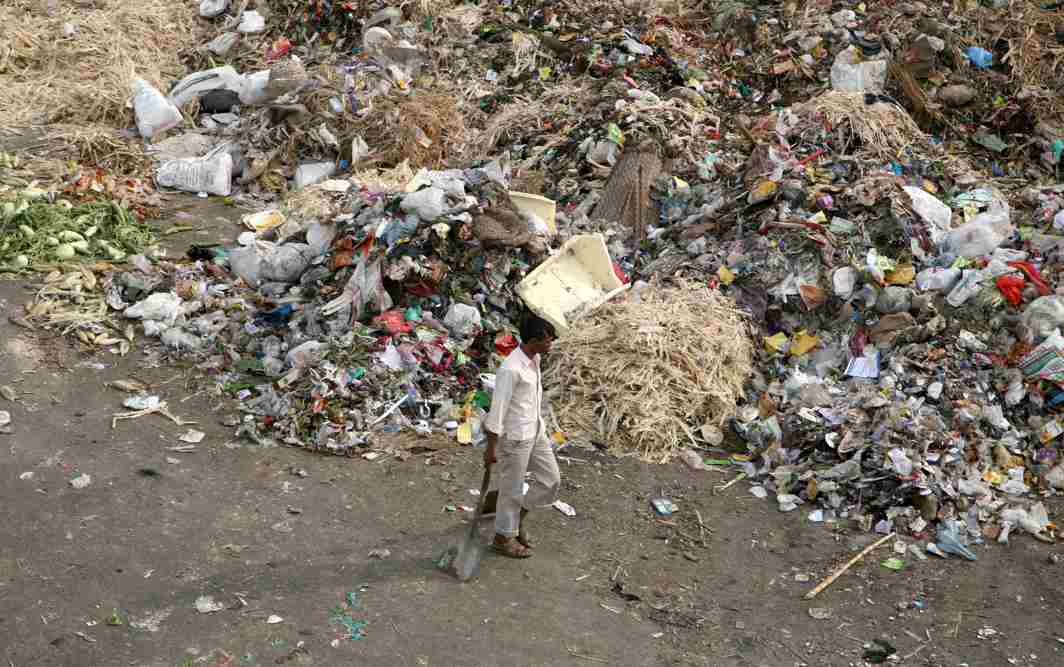 Above: Picture by Anil Shakya

ABP News had showed several such cases of dumped garbage and the court had taken suo motu cognizance of the same. The bench had appointed the reporter of the channel as the local commissioner and had asked him to prepare a video report.

On June 28 the bench asked the reporter to give the raw footage to the MCD and said: “We believe in what you have made. We will put a committee in place to look over the situation. Please give us the edited footage.”

The court then spelt out its roadmap. Said the bench: “We need to divide the measures into three parts:

“In the short term measures we are proposing to pass the directions:

“We will continue to monitor on short-term measures.

“We want the projection statistics. You should be planning at least for next coming years. The projection should be in terms of funding the number of workers needed and availability of the land.

“Safai karamcharis should be paid on time.”

The bench asked the MCD if their workers are on contract or are permanent. To which the respondent said: “They are MCD employees.”

The bench asked: “Please tell us how you maintain the rota of safai karamcharis. You must post in public places who is the safai karamchari so that people should know. Do it yourself and make plans. Whether you need to install the CCTV, that is a very good option.

“This is the policy we suggest to you. There are countries that are more populated than us, how they clean their garbage? What about China? How are they working and how do their safai karamcharis do their work?

“We give you two weeks time to formulate this. We will discuss the long term action plan later.”

The court also took cognizance of a report published in the daily DNA, where it says that civic bodies are unable to cooperate and there is a rise in dengue cases in the city as of July 26.

The court said: “In the unedited footage presented to the court it can be seen that garbage is still present in several areas where he inspected and we ask the municipal corporation to visit those areas and clean up. However, some steps have been taken.

“We are dividing this issue into three distinct areas. First is the aspect of cleaning of solid waste on a day-to-day basis. We have to implement the action plan on short term or long-term basis. We will implement punishment for
non-removal of garbage. There is this aspect of littering as well. And removal of that is statutory duty. All three aspects are important and should be monitored.”

The court also spelt out the monitoring methods. It said:

“We monitor in the following ways:

–          Identification of safai karamchari which would include the photographs should be ward wise on the website of the MCD.

–          Time-wise roster of allocation of duties and location wise posted on website.

–          The MCD shall examine the possibility of roster and assigning the duties.

–          Issue of recording the attendance should be done by the municipal corporations and should be present on next hearing.

“We also make it clear that class 4 employees shall be paid before making payment to any other employee of the municipal corporation.

“We have said in a order dated May 16 that some of the statutory provisions laid down as penal action against the littering offenders but none of the municipal authorities provide us any detail of penal action taken by them against the offenders.

“It can be seen that insufficient action is being taken by the corporations. Stringent action should be taken against those who are littering in Delhi. The report in this regard should be presented before us within two weeks.

“While the role of municipal corporation is punishing the litterers, however, no action been taken by them. It can be seen that very little has been done in regards to the public awareness.

“The Delhi state municipal authorities are undertaking the programme in improving the ecology, earth and us. It is essential to implement a nodal agency in this regards.

“We direct as follows:

“Mr Naveen Gupta shall be the nodal officer. The report regarding the publicity material and printed material etc. would be submitted in this court within 4 weeks.

“It shall be the responsibility of the Delhi govt to pay for designing of the programme as per the implementation of the resources needed for the programme.

“It was found that the Central govt provides an annual budget under the Swacch Bharat Abhiyan and allocates it to the municipal corporations, but none of it reaches to them.

“The disbursement of funds by the Delhi govt is Rs 325 crore and Shanjay Ghosh showed us the tabulation that the collection of direct taxes in Delhi is increased.”

With this detailed order, the court has also listed the matter for July 12.